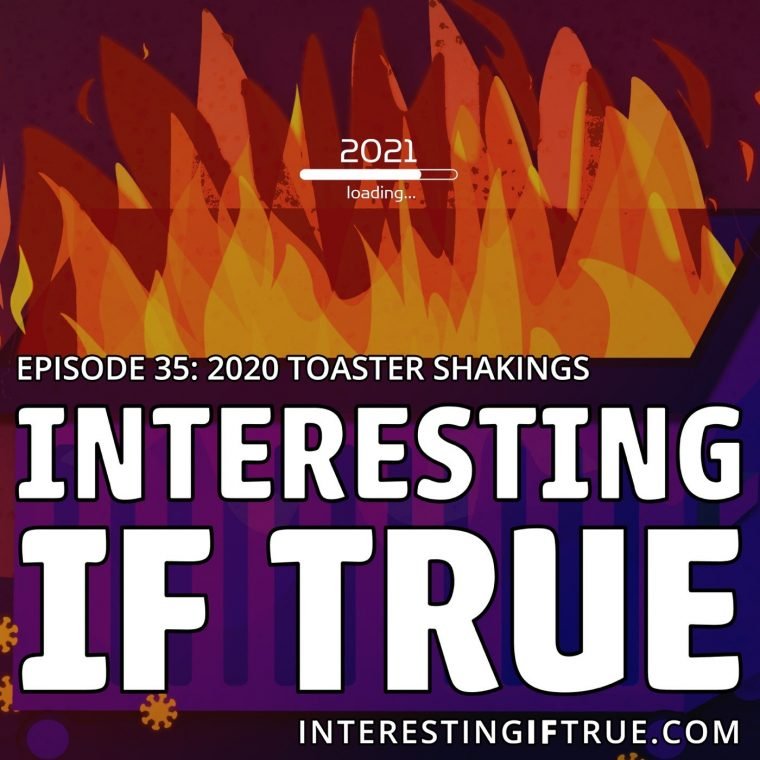 Welcome to Interesting If True, the podcast that’s very pleased indeed to welcome you into 2021.

I’m your host this week, Aaron, and with me are the ghosts of 2020-podcastings past.

Unfortunately, 2020, like a gross rash, just keeps coming back and our year-end plan found itself in the dumpster-fire burning alongside all our other hopes, dreams, and aspirations for the year.

So send Shea and Jenn—who we thought were getting better, and Jim—who, insofar as I know, is getting better… all your funniest “get well soon”’s. Preferably in the form of 5-star reviews wherever you get your podcasts.

And since I recorded this intro a daring 24 hours before air-date, Steve’s probably fallen down and broken his tilapia or something, so him too. Seriously, the iTunes be barron.

So, befitting a scrambled dash to save a failed recording at the end of a failure of a year, I give you all the content that failed to become a podcast with this Best of 2020 Bloopers episode!

KFC has a new shot that’s coming to bars near-ish you!
There’s been a growing trend for stock-tails, using broth in cocktails, over the last couple of years. “Bartenders are stirring and shaking animal stock and bone broth into cocktails served warm and chilled to add a new savory element to seasonal drinking,” according to a feature from Liquor.com on the trendy drink.
KFC cooked up three varieties of this new kind of drink: the Gravy Mary, Southern Twist and Fingerlickin’ Sour, with the tagline “Gravy so good you can drink it.”
“Our fans repeatedly express their love for our gravy, which always sparks ideas within the team. We know our gravy is good enough to drink – so with ‘stock-tails’ being a real hit at the moment, what better ingredient to take them to the next level?” Marion Racine, marketing manager at KFC UK & Ireland, told The Independent.
Ingredients:
Method:
Recipes for the other two cocktails can be found on Youtube.
So yeah. Basically, this is why America is the way it is…

Thanks for listening to Interesting If True, if you like what you heard and think your friends might too, share us on the socials, leave us a good review wherever you’re listening, or subscribe at Patreon.com/iit where, for as little as a dollar a show, you’ll get a patron-exclusive story each week, episodes of our sister show 4 More Beers, outtakes and more!

Pinyin is a Vietnamese alcoholic beverage produced by infusing whole snakes in rice wine or grain alcohol. The drink was first recorded to have been consumed in China during the Western Zhou dynasty (ca. 1040–770 BC) and is considered an important curative. The snakes, preferably venomous ones, are not usually preserved for their meat but to have their “essence” and snake venom dissolved in the liquor. Luckily bottles don’t bite, so the snake venom poses no real threat to the drinker. It is denatured by the ethanol and is thereby inactive and just to be safe it would be denatured by stomach acid also. Which is why being poisoned and being envenomed are different things.

You can get this, typically, one of two ways. Steeped, which is to say that a snake, perhaps snakes, are put in the bottle and left for a long while. Often including medial herbs. Or you can get it mixed, which is literally a shot of a given booze, which a juiced snake – as in literally putting a snake in a juicer.

Snake wine is widely believed to improve health and virility. There are similar drinks made with geckos or sea horses rather than snakes. Due to its high alcohol percentage its traditionally drunk in shot glasses. Braver drinkers may eat certain parts of the snake, such as the gallbladder, eyeballs and the stomach – because hey, why not.

Before I got though, this one while cringe worthy on the surface isn’t so odd. You can get scorpion shots in Vegas after all…

I’m Aaron, and I’d like to thank all our listeners, supporters, and my co-hosts.