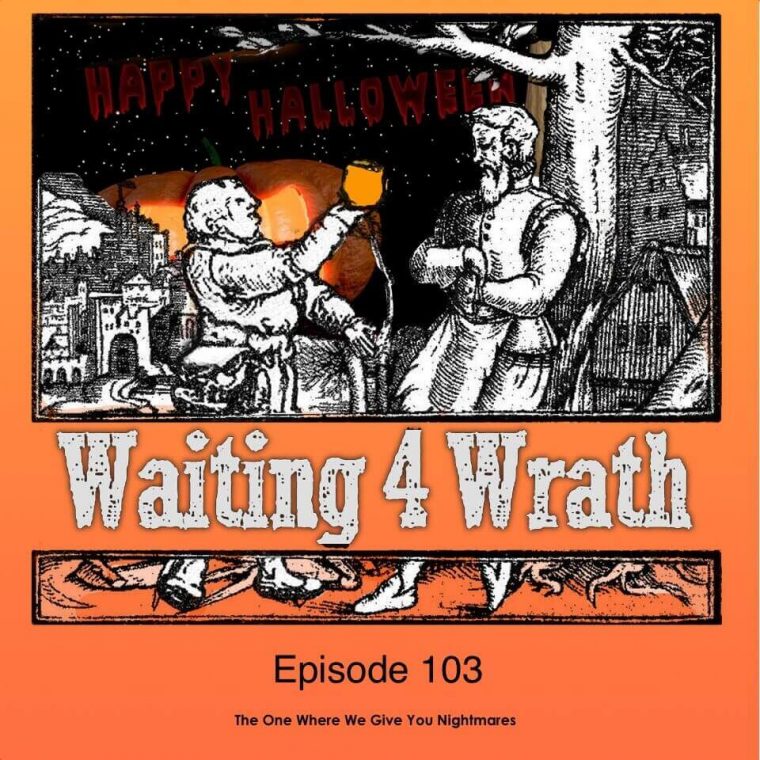 Episode 103 – The One Where We Give You Nightmares

Now, grab a beer and help us test the god hypothesis — because, while Heratee (Greek goddess of witches and ghosts) hasn’t struck us down yet, we are trying her patience!

God” is the best Halloween costume for people that don’t want to go to a party.

People will be able to claim that you were…guest. And the burden of proof isn’t even relevant. Especially for you cause God doesn’t proof his own existence as a habit and no one can call you

Did you know that Halloween falls on October 31st because that is the end of the Celtic calendar? It originated as a pagan holiday to celebrate the dead.

We need to apologize to Papa Murphy – Whose pizza we love. We did not have Jenn here to ground us in reality, and we got carried away making fun of the wrong person. It’s the owner of Papa Johns who is an amazing cunt.

Also – we know, now, that Johnson isn’t Trump’s running mate… he’s the other vote-hole who believes in superstitious woo-woo bullshit. But hey, legalize it right? Because if we can’t get stoned the lizard overlords win…

Lucas Leonard was beaten to death and his brother Christopher was badly injured at Word of Life Christian Church. Now the pastor of the church, Tiffanie Irwin, her brother, Joseph Irwin, and mother-and-son church members Linda and David Morey finally have been convicted in the attack.

American Atheists drop a federal lawsuit against Kansas City after the council passed an ordinance repealing funding of $65,000 to Modest Miles Ministry for National Baptist Convention.

No new iTunes reviews or new patrons… what the hell people!

We got a voicemail from a friend of the show Chad!

Apparently he did tell Shea what was up with those beers, but apparently, Shea was too busy shoving beer up his ass to take notes… (which would be the best way to consume that last beer from Chad)

Australia Cracks Down On The Spread Of Anti-Vax Bullshit – http://bit.ly/2dNhuPN

Patreon Exclusive! Sorry, it was a time constraint kinda thing but I don’t mind saying that this story alone is worth a buck, iTunes review, e-mail or voicemail. Fer real!

Dyatlov Pass. Hold on to your butts.

Who did it? Was it Shea’s relations, UFO’s or the USSR testing their new anti-freedom ray!?

If you think you know the answer, send us an email at [email protected] or leave a voicemail at (513) 760–0463 or by clicking on the SpeakPipe button on our website or Facebook pages. Inquiring minds want to know… then drink until they’ve forgotten everything about that horrible death mountain.

While most of our topics involve skepticism of religion, in honor of Halloween, let’s talk paranormal.

Tell her how awesome she is at @heyadiana