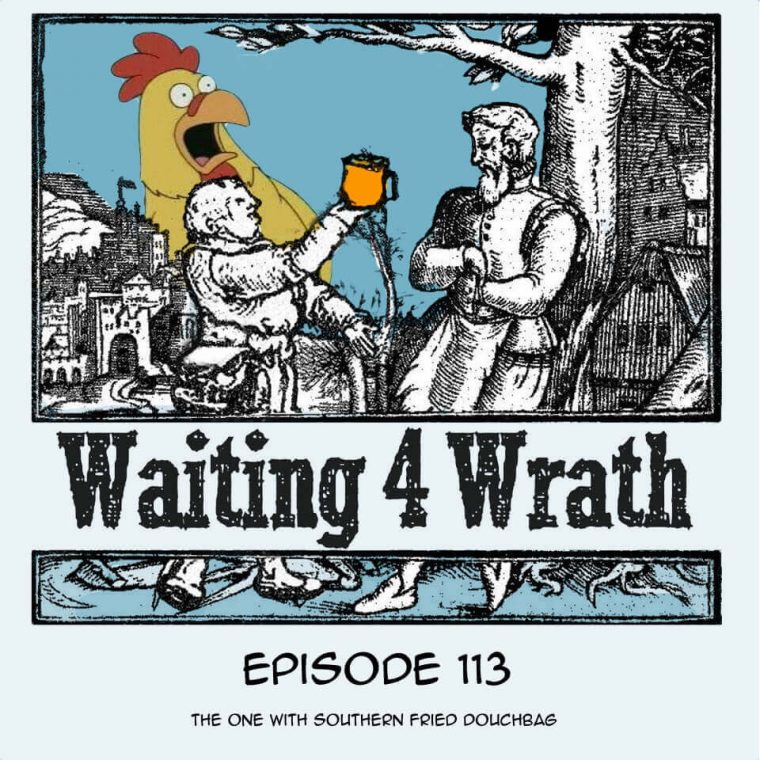 Episode 113 – The One With Southern Fried Douchbags

In this week’s show, episode 113, Chris Corley and Azalia Banks sacrifice the sad helpless decedents of the dinosaurs in the hopes of making 2016 the year Ken Ham accepts that he is, in fact, descended from filthy shark men.

Shea’s Life LessonNow, grab a beer and help us test the god hypothesis — because, while Hathor Egyptian goddess of music, dance and fertility hasn’t struck us down yet, we are trying her patience!

This week I learned that if you were to mix the story of King Midas and the story of Oedipus it would be motherfucking gold!

I’m Steve and before we get to all that, let’s have a beer!Did you know that the Iroquois, a Native American tribe that was a member of the Confederacy of Six Nations, believed in fairies? Well, technically they seemed more like elves/gnomes. They were known as the Jo-ga-oh, and were believed to protect and guide all the natural world and protect the People Iroquois from unseen hidden enemies.

We got a couple of iTunes reviews!

simply put, I LOVE THIS SHOW!!!

by: David the Oxford United States

It’s about to be 2017 and I am looking forward to my weekly fix of banter and drinking. I wish y’all the best of times in the coming year and to anybody out there who needs a pick me up and a reason to keep going, this is your podcast. See y’all at reason con.

You guysand girl rock. Keep it up! Listening to 109 right now, I always enjoy your reaction when the beer is off.

While I disagree with their stance that there is anything good about beer they put on a good podcast. I had the good fortune to meet them at a Shelly Segal concert a while ago and they are as funny and generous in person as they are on the show. I work with a lot of beer drinking people and their insight allows me to at least follow those conversations at work. I apologize if this is jumping around I had the good sense to consume a healthy dose of rum this evening before doing my informal logic homework. Keep up the good work and I look forward to each episode.

Nobody informed the Sharks –  http://bit.ly/2iVwOZV

South Carolina Republican State Representative, Chris Corley, was arrested Dec. 29th in the city of Aiken. Before we get into the arrest, I want to give just a quick bit of backstory on this man. He had actually made headlines in December of 2015. Quick trip down racist memory lane:

I was made aware of Mr. Corley when he sent out Christmas cards last year to his fellow Republican representatives of the house that can only be described as OVERTLY racist. The front of the card shows the Confederate flag flying over the SC state capital. On the back he wrote:

“May your Christmas be filled with memories of a happier time when South Carolina’s leaders possessed morals, convictions and the principles to stand for what is right.

How fortunate each and every one of us are that our Lord and Savior Jesus Christ chose to be born into this miserable world. His sacrifice was difficult, but the best decisions are not always the easiest ones.

May you have a blessed and happy Christmas, and may you take this joyous time as an opportunity to ask forgiveness of all yours sins such as betrayal.”

This mainly stems from Gov. Nikki Haley’s call for a vote to remove it the flag from SC government buildings after the Charleston church shootings. It was decided to remove the flag, so Rep. Corley sat in the House seat, waving a small white flag stating that it should be the new state flag get it? Surrender??.

Ok, so that was a brief rundown on Rep. Corley. He’s a smug bigot that likes to shame people for ttheir lack of conviction and morals. Got it?

New Years Eve taught me an important lesson – I don’t know shit about music. So I did some looking…

Rapper Azealia Banks Slaughtered Chickens in Her Closet for Three Years As a Form of Witchcraft –  http://bit.ly/2iVqscZ

Hammie Charles Wolford knows what killed the dinosaurs… it was Jesus!

Creationist: The Story of Beowulf is an “Eyewitness Account” of Humans Interacting with Dinosaurs –  http://bit.ly/2iVDoiL

AiG’s Dr. Georgia Purdom introduced me to geologist Andrew Snelling, who followed Ken Ham to the U.S. from Australia and for the last nine years has been the director of research for Answers in Genesis. I said,

“There were dinosaurs on the Ark, right?” Snelling nodded. “Right.”

“Then why aren’t there dinosaurs today?”

“Dinosaurs went extinct after they left the Ark. After the Flood, we had the Ice Age. We had a radically different world. Some creatures weren’t able to adapt. But most cultures in the world have some legend about dragons, and these dragons are actually a good description of dinosaurs. The Chinese, for example — their dragons are depicted on scrolls pulling the chariots of emperors. And there was a story called Beowulf in which the king slays a dragon, and this happened in Norway.”

“So you take Beowulf to be evidence of dinosaurs existing?”

“There were?” the boy said.

No one can swing by a grocery store and buy two ounces of logic, a bag of natural law, and a carton of morality. In a universe without laws of logic or laws of nature, how could anyone prove that naturalistic evolution has occurred?”

A man with silver hair pointed to a display about gravity while talking to a boy who looked like he was 10 years old.

“Gravity has never been proven, because gravity is a large object attracted to a smaller object, and it’s never been seen. If gravity existed, a BB and a bowling ball should bump into each other. So you see how guys like Newton get caught in their own lies.”

What started out as a normal Uber driving shift for Keith Avila turned into an incredible rescue of a 16-year-old girl from a child sex trafficking ring.