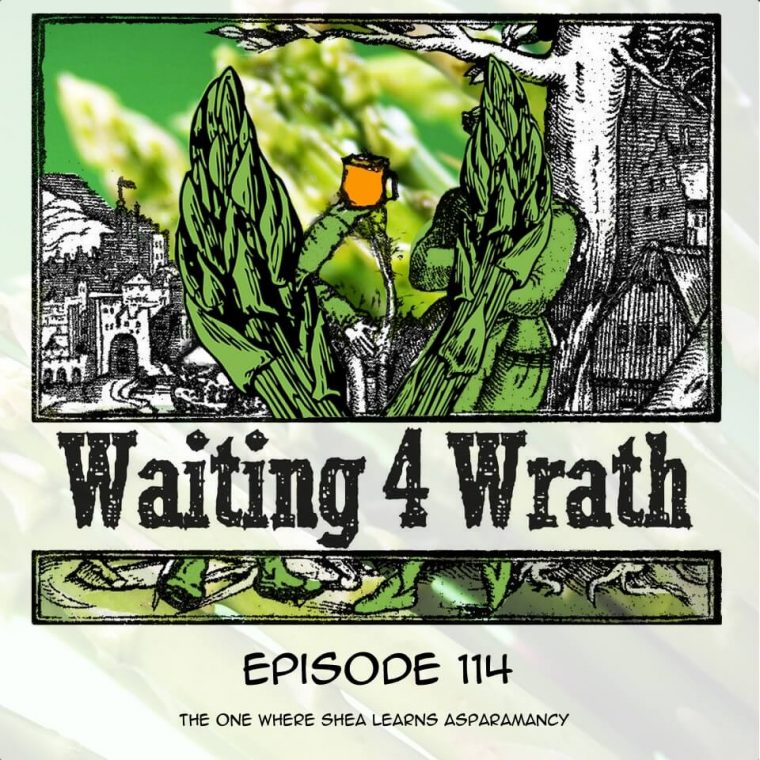 Episode 114 – The One Where Shea Learns Asparamancy

In this week’s show, episode 114, AiG launches an r-Kansas retreat for all the good astronaut boys and boys who eat their veggies and reflect on the year gone by.

Now, grab a beer and help us test the god hypothesis — because, while Anat Canaanite goddess of love and war hasn’t struck us down yet, we are trying their patience!

This week I learned that if you step on a person’s foot they open their mouths, just like trash cans.

Did you know practitioners of Candomble an African based religion brought to the Americas by slave ships, believe in one all powerful God called Oludumaré, who is served by lesser deities!

We have a new patron, Lil. Thank you for your support!

This podcast is a keeper! by: Sweet Pea Brown United States

I love this show even though I don’t drink beer. I love the back and forth of timely articles and the presence of estrogen in the midst of all that testosterone. Informative and entertaining. Keep it up.

Find the Atheist Avengers at http://atheistavengers.com

Tickets are still on sale if you’re in the area and want to have a beer with us.

Also please remember not to murder us!

Also, as promised some months ago, now begins our New Year beg-a-thon to make sure we can eat on the trip you just paid for … so make sure you check out patreon.com/w4w for show that has been averaging 30 extra minutes lately (though, this not this week… it was about 15 extra minutes) and if subscriptions aren’t your bag, visit interestingiftrue.com to make a one-time donation via PayPal or do your usual Amazon shopping but there through our referral link and amazon will send us a cut.

There are plenty of great ways to support the show so… umm… do that.

To kick things off I’ll be releasing a longer 4MoreBeers episode to patrons. These are free episodes largely made up of chatter before and after recording.

Shea got a letter from RW, Shea…

This is Cthulhu the Octopus God. Hope you all have a wonderful New Year. You will probably be like me and only staying up to watch 2016 die. Also, recently had the chance to try a Leinenkugel’s Snowdrift Vanilla Porter. I really did not like it. It was very acidic with very little vanilla. I think I will go Big Gay Jim style to bring in the New Year with so Scotch or Whiskey.

Followup – Middle School Bible Club Shut Down in Missouri, But Not for Any of the Right Reasons – http://bit.ly/2iqyc8o

“I’m sure that Jemima’s annual predictions will also attract wide media interest as they have in the past and thank her for continuing to keep Vale of Evesham asparagus on the world-wide map.”

She has been dubbed ‘Ambassador for Vale Gras the Vale of Evesham even though she now lives in Bath!

“It is a great honor to be associated with it and it is great fun. I do it because I enjoy doing it,” she said.

It seems to me like this might all be just a bit of fun put on to promote the festival. And to their credit, it’s worked wonderfully as we’ve just linked to it. Everyone seemed to be having a good time and I don’t see how this could possibly be taken seriously… And frankly, who doesn’t love a grilled asparagus?… right…

So yeah. People think this is a thing…

Science and Equality! Let’s get the fuck out of our country—in fact, let’s leave the planet altogether. Congratulations to Jeanette Epps, who has become the first African American onboard the International Space Station. – http://huff.to/2iqEQLZ

The ISS has been in orbit since 1998 and is now the largest artificial body in orbit and can sometimes be seen by the naked eye from Earth. It was intended to be a laboratory, observatory, and factory in low Earth orbit. It was also planned to provide transportation, maintenance, and act as a staging base for possible future missions to the Moon, Mars, and asteroids.

NASA has sent 14 black astronauts into space in previous missions, but Epps will be the 1st African American and only 13th woman aboard the ISS.

I’m hoping lots of the young girls who are considering looking into education/careers in the STEM fields look to Epps as a mentor. She has a Ph.D. in aerospace engineering and has served as an astronaut since 2009. She has also spent seven years as a technical intelligence officer for the Central Intelligence Agency. She is also a former NASA Graduate Student Researchers Project fellow, will be one of among 200 astronauts who have visited the ISS.

Episode Links Will Being Playing At The Story!

If you weren’t a listener last year, you pretty much need to listen to this. The audio is less awesome than it is now, but not by much. It’s super listenable and well worth your time. Also keep in mind that we were like 15 beer tastings in at this point…

Episode 69 – Because Numerology Is Funny… http://bit.ly/2imudX5

This is just an episode link cause we don’t actually talk about this episode for that matter, I don’t even remember what it’s about but we’re children so the name is funny.

The Poop Statue story we can’t remember or find. So… a current Patreon cut the show to anyone who remembers when that was!

We mention a story about a dog fucker. And just to be clear it is, in fact, about some lady who fucks dogs. You probably shouldn’t listen to it. Also, the audio kinda sucks and it’s terrible and listening to it will make baby Jesus cry.

RBG sends personal note to 8yr old girl who dressed up like her on Superhero’s Day – http://huff.to/2immit2