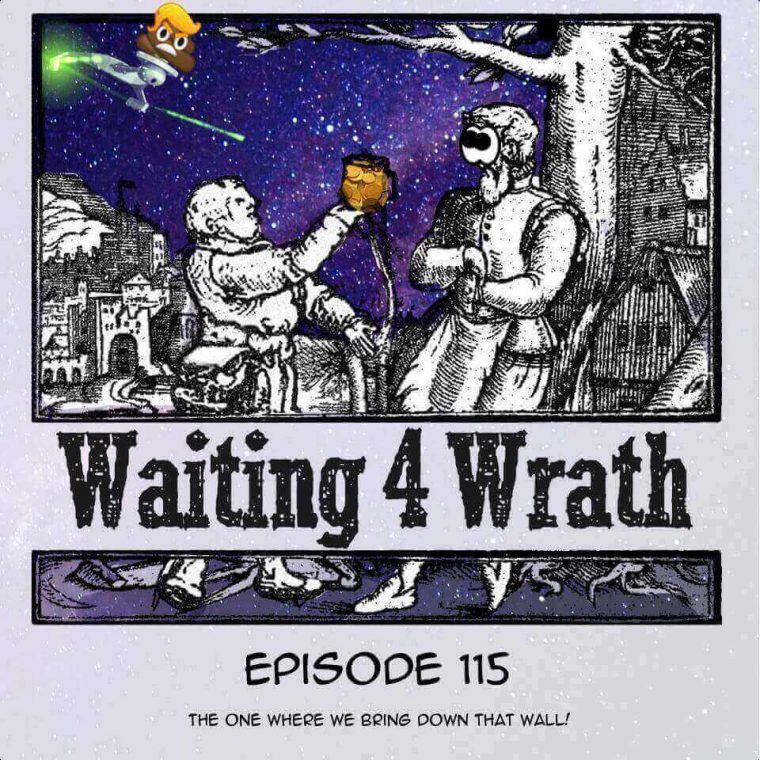 Episode 115 – The One Where We Bring Down That Wall!

In This Week’s Show Gordon Klingonshit tells Obama to tear down that demon wall so he can shield Crazy-bitch McDrunkenBrain from planned parenthood tried to take them to hell!
Now, grab a beer and help us test the god hypothesis — because, while Cernobog (Slavic god of Death, chaos, and misfortune) hasn’t struck us down yet, we are trying his patience!
Shea’s Life Lesson
This week I learned that peacocks are actually born completely white and don’t get their beautiful plumage until they taste human flesh.
Jenn’s Actual Lesson
In honor of civil rights icon, Martin Luther King Jr’s birthday this day of recording, I would like to share one of my favorite quotes of his:

“Rarely do we find men who willingly engage in hard, solid thinking. There is an almost universal quest for easy answers and half-baked solutions. Nothing pains some people more than having to think.”

Round Table Discussion
Two in a row starting with patrons! Thanks to Emanuel’s Biblical level awesomeness we’re on a roll!
Keep it going by visiting http://patreon.com/w4w and getting shows that always include another story but frequently run as long as 30 more minutes! Speaking of reasons it’s #GoodToBeAPatron — we just released our first “real” episode of 4 More Beers. We did a test a little while ago but now it’s got template files and Automator functions just like a real boy!
4 More Beers is a smaller show we put out just to patrons wherein we announce the next four beers we’ll be drinking and chat a bit. Each show will be a cobbling together of pre-show chatter, behind the scenes discussions, and discussions about the direction of the show… also outtakes. Sooooooo many outtakes and silly clips. This week’s episode is about 45minutes long and includes pre-Jim’s Juice Jenn, Shea doing intros… sorta… and an impromptu discussion we had a few weeks ago with Jim before recording about trans awareness and Callie’s Gaytheist Manifesto.
It’s good stuff. But you can only get it — and end this dreadful beg-a-thon at http://patreon.com/w4w
We also have a Canadian iTunes review from Rikki6336
5 Stars – They could be more offensive

Finally, we got some texts from iTunes reviewer Macklebauer, thanks for getting in touch and we hope your birthday was a blast!

Holy Fuck, The Stupid, It Burns…. – http://bit.ly/2ju6Hde
In Case That Last Story Was Stupid Enough For You... – http://bit.ly/2jup8OO (http://www.ifapray.org/)
The group, Intercessors For America, is planning to … walk, ahem, march for Jesus
You’ve heard of Bridezilla… how about bridesmaidzilla – http://huff.to/2juc2B4

Shea’s Story
Klingenschmitt is at it again – http://bit.ly/2juhZOj
Gays are immoral and should never be teachers!
On the latest episode of “Pray In Jesus Name” or PIJN for short our good friend Klingyshit said that gay people should never be allowed to serve as school teachers because they “should be disqualified immediately because of their immorality.”
was commenting on a report about a Minnesota elementary school teacher and his husband who allegedly abused multiple boys over the course of several years and then killed themselves once an investigation was launched. Klingenschmitt said that while these men were obviously possessed by “a demonic spirit of child abuse,” the school system and society as a whole also share the blame for allowing gay people to teach in public schools in the first place. – http://bit.ly/2julJj8
Many of these allegations were confirmed after their deaths when police found a hidden camera in a bathroom clock
Though I’m not making light of these two men’s crimes, this teacher was in a position of power and abused his relationship as a mentor, a role model, and a care taker. It is disgusting what these two men did.
But as Klingyshit classifies all gay and lesbian teachers as sex offenders and morally corrupt is to do the same to all teachers. A quick search of educator abuse with coming up with results of offenders from every creed, sex, and nationality.
Klingyshit then says “As a culture now, the demonic spirit of homosexuality has taken over and redefined marriage, particularly in Minnesota, to tell these boys that it is okay,” he said. “And the demonic spirit of deception has taken over the school board or whoever decided, maybe the principal, decided to hire these child abusers to teach elementary school. Well, if anything, they should have been disqualified immediately because of their immorality, because the immorality inside of these two men are indicators that they are unfit to be a good example to little children.”
“This is evil upon evil and it’s not just these two men who are at fault,”
Klingenschmitt added. “It is our laws as a society that need to be changed to prevent and protect children from this kind of abuse in the future.”
We should not give these two men a pass, as what they did was deplorable but calling all teachers horrible deviants from hell is overboard.
Jenn’s Story
Is there a brainy reason I want to eat a whole pizza in my underwear after a night at the bar? MAYBE!!!
Not that any of us could speak to this from experience, but apparently binge drinking can sometimes lead to binge eating. And, interestingly, scientists have conducted some experiments that may help to explain exactly WHY we—er, PEOPLE end up heading for a late night taco run after a night of bar crawling.
http://bit.ly/2jumngn
From an article in Medical Daily

“For the study, researchers looked at the brains of mice, some who were given alcohol and some who were not, to understand if there was a neurological explanation for increased appetite after drinking alcohol.They found that an area of the brain called the Agrp neurons, which is located in the hypothalamus, was activated in mice given alcohol, but not the controls. When the team purposely deactivated these neurons in mice given alcohol, they did not overeat. This suggested that alcohol-induced food binges may be caused by a constant activation of this part of the brain.”

“Although the experiment cannot be reproduced on humans for ethical reasons, the mice behaved the same way as humans who drank too much the night before. For example, mice that were injected with alcohol became more hungry and ate far more than mice that were not given alcohol. This effect was especially strong the next day, which may explain why hungover individuals often take solace in overeating. The neurons in the mice remained active throughout the second day, urging them to continue to eat even when they were physically full.”

Aaron’s Patreon Story
Patreon Quick News
Update: Father Who Let His Child Die of Meningitis is Once Again Promoting Harmful Alternative Medicine – http://bit.ly/2jui7gM
Remember David Stephan and his wife Collet Stephan?
They’re the Canadians who received four months in jail and three months of house arrest, respectively, as punishment for allowing their baby to die from meningitis by treating him with maple syrup and hot peppers instead of the vaccine that could have actually helped.
David Stephan is already back on the road telling people all about the health benefits of alternative medicine, doing whatever he can to make sure other kids suffer just like his own.
The Alberta father found guilty with this wife of “failing to provide the necessaries of life” to their 18-month-old son Ezekiel appeared Tuesday at an alternative health store in Prince George, B.C., to promote a nutritional supplement claimed to treat mental illness.

“Come listen to David Stephan talk about how his family members suffered from mental illness and were made well,” read a flyer promoting the appearance at Ave Maria Specialties. The store calls itself the largest health food store in northern British Columbia and promises “healthy products for mind, body, and soul.”

That’s Not How You Do Math…
Pa. parents outraged by high school’s math question on child’s sexual assault – http://bit.ly/2julg0h
Parents with students in the Bucks County high school did a double-take when they saw a math homework question that centered on which family member sexually assaulted a young girl.
Pennridge Superintendent Jacqueline A. Rattigan has since apologized, saying in a statement quoted by Philly.com that the question was “downloaded from a website that allows teachers around the world to share educational resources. It is not part of our approve curriculum.”
Rattigan added that “steps to avoid such occurrences in the future” were being taken.

Join The Discussion
We’d love to hear from you!
To comment on a show or suggest a brew visit our web, twitter or Facebook pages. As always, we’d love to get a good rating on iTunes or Stitcher!