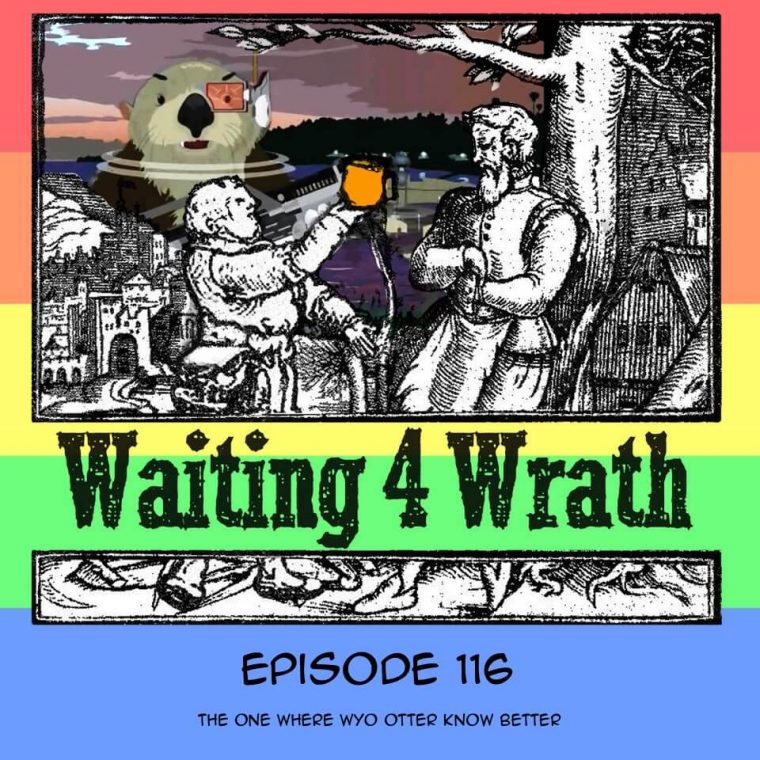 Episode 116 – The One Where Wyoming Otter Know Better

In This Week’s Show Using their fabulous shoes with surgical precision, the gays finally clean up all that nasty legal paperwork from the otters of usual size.
Now, grab a beer and help us test the god hypothesis — because, while Houyi (the Chinese god of archery) hasn’t struck us down yet, we are trying his patience!
Shea’s Life Lesson
You shouldn’t say to a woman in a pink knitted hats eraser head!
Jenn’s Actual Lesson
Did you know followers of Rastafarianism worship a Father and Savior duo like Christianity?
In this case, God is Jah, who became incarnate in Jesus (who was black); Ethiopian Emperor Haile Selassie I was the messiah.
Jim “Good” Gay News
Jim HB2s all over you!
But before we get to all that, let’s have a beer!

Round Table Discussion
Patrons!
Holy crap did you all come through, we have THREE people to thank! Not only is this the 3rd straight episode with new patrons but it’s a hat trick of patrons! Really you’re all the best, especially:
Thank you for helping us eat in North Carolina! We’re given to understand that the local delicacies of road braised possum and gravy covered fried lard don’t come cheap – especially if you want a Mountain Dew… which we’re given to understand not ordering is tantamount to shitting on someone’s lawn…
iTunes Reviews
Fuzzy Feelings
By: Cobbyh

Every time I listen to these wonderful people spout awesomeness from their food holes I am happy and have fuzzy feelings. You have improved my knowledge of beer, cattle, and other important things. Everytime I quote your podcast in public, I get slapped. I should really stop quoting Shea and start quoting Jenn. Anyways, you are the most best wonderfullest thing on the internet (I am practicing for Donald Dump speak) and I am proud to say that you are still the only podcast that I have given money to. Because you are the more betterest podcast, you could shoot a person on 5th ave and…. Thank you so much for taking the tiime to produce such wonderful content for my ear holes. This is truly an awesomely skeptical muscle flexing podcast. More graterest, better bestest!

Thank you for the laughs and brightening my day! I look forward to every episode!

“When we pray over anything, its poison dies. So it can’t harm people. Nothing happened, no one has been to hospital,” he said as he further noted that those members who took the vehicle engine cleaning fluid had been “saved, healed and delivered”. He backed up his claims by citing Bible verses.  “Jesus spat on the ground and made mud. He took that mud and smeared it on the eyes of a blind man and, instantly, that blindness was healed. Mark 16 v 17-18 says ‘in My name shall they cast out devils; they shall speak with new tongues. They shall take up serpents; and if they drink any deadly thing, it shall not hurt them; they shall lay hands on the sick, and they shall recover’,” he quoted.

“She indicated to me during an interview that she anointed the desks, the pencils, the doorways and also the students’ heads with holy water,” said [Drane].

Breaking My Foot Off In Your AIDs
‘Aids-curing’ pastor claims he removed woman’s ‘vaginal warts’ with the power of his holy shoe – http://bit.ly/2ja56fJ

“The woman came to me about pimples on her vagina. This made it impossible for her to sleep with her husband.  “Because the problem was on her private part I decided to use the shoe. I believe in miracles and God uses anything to heal.”

”I also cured a lot of people of HIV/Aids‚ immediately after praying for them I ask them to go to the nearest clinic and test. Most of them come back negative‚ and those that are positive I encourage them to have faith and continue to pray for them.  “I specialize in deliverance for those who are demon possessed‚ spiritual husbands and diseases.”

Sorry, this is a rough one. But we found a few laughs… ~ A

“During the abortion [last year] in the suspect’s home, the patient was given medication and then the fetus and placenta were removed with a forceps. It is then that we believe her small intestines were also removed.”

Jenn Otter Known Better
Wolf-sized otters made for the cutest nightmares in China several million years ago.
The otter family has been noted in the fossil record for at least the last 18 millions years, but little is known because the record itself is poor. There have only been a few prehistoric species identified, mainly from small bits of bone that limit the information.
From Gizmodo:

“The recent discovery of a complete skull and mandible, along with the partial skeletons of three individuals, is offering an unprecedented glimpse into the evolution of these animals. The remains were discovered by American paleontologists who were working at the Shuitangba Site in northeastern Yunnan Province in southwest China, in what used to be an ancient lakebed.”

American scientist Dr. Denise Su, curator and head of paleobotany and paleoecology at the Cleveland Museum of Natural History was co-author to the research that describes this new species.
From phys.org:

“The new species, Siamogale melilutra lived 6.24 million years ago in in the Yunnan Province in China. It weighed approximately 110 lbs and was roughly the size of a modern wolf. …What is unique about the new discovery is that researchers recovered a complete cranium, mandible, dentition and various skeletal elements—offering a wealth of insight into the taxonomy, evolutionary history and functional morphology of this new species.”

Interestingly, the jaws actually show features that are both common in otters AND badgers, which belong to the same family Mustelidae. This new species’ name of melilutra, combines the Latin names for badger (meles) and otter (lutra). So did we find a common ancestor?

“It was highlighted to me that people living with dementia can feel under pressure when they reach the checkout, and it struck me that this could be true for others as well,” the store’s Kerry Speed told BBC. “Early feedback from customers has been very positive. Although it’s a simple gesture, we hope this will make a difference.”