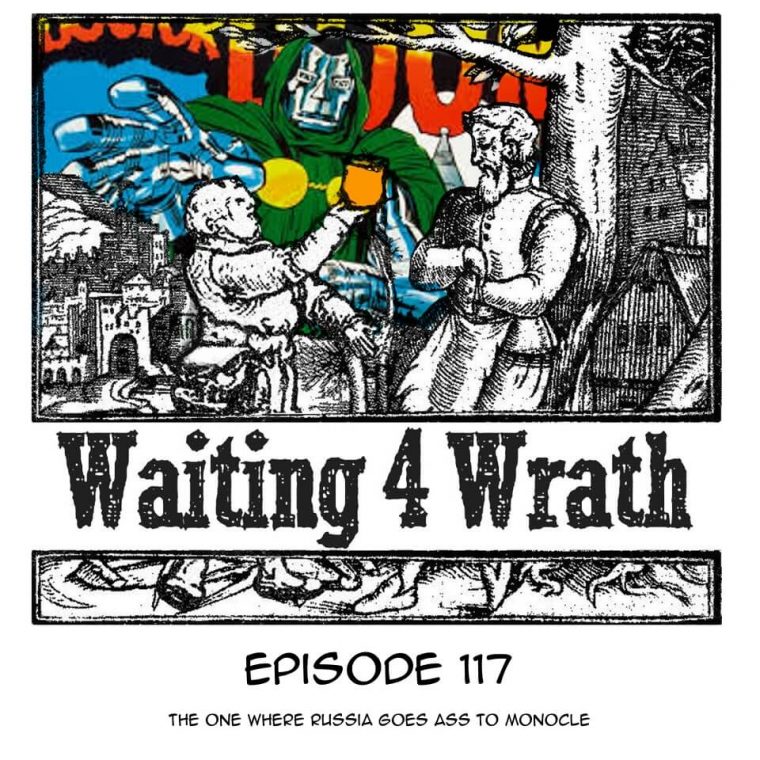 Episode 117 – The One Where Russia goes Ass to Monocle

In this week’s show sadly is without Aaron’s garbled jargon, we will discuss hypocrites and assholes, and hear how Shea has apparently found a way to get Jeebus to heal his eyeballs.
Now, grab a beer and help us test the god hypothesis — because, while Ukko (the Finnish god of the sky, thunder & crops) hasn’t struck us down yet, we are trying his patience!
Shea’s Life Lesson
This week I learned that it’s easier to sharpen the end of a worm into a point -using a pencil sharpener- if you freeze it first.
Jenn’s Actual Lesson
Did you know that Umbanda is a religion of Brazil that combines influences of the indigenous Brazilian religion, African religions, Catholicism, and Spiritism. It was founded in the early 1900s by Zelio Fernandino de Moraes.
But before we get to all that, let’s have a beer!

Round Table Discussion
No new patrons or iTunes reviews.
However!
Our new favorite German listener (sorry T’Boogs) sent us an amazing post-Christmas gift of chocolates, candies and OF COURSE beer! Thank you so much, Dennis! He even included a kind letter.
Nathan tweeted us from the Women’s March! Fantastic hats ladies keep up the good work. Nathan asked us to mention that Congress has a phone number and you should call it: Congress 202–225–3121 – just be a little more polite to them than you would be on our drunk-dial line.
We also got some info from awesomest home-brewer of the show Ben! He asked us to share http://www.marchforscience.com who’s twitter account just announced that they will be releasing an organizational tool in the upcoming days.
Because science and technology will make for a better march for all!
To close out the roundtable this week we’re happy to say that HB135 was dead moments before the last show was published!
Which is amazing!
Thanks to everyone who sent us a message, sent our reps messages and generally got the word out. This was clearly crushed by media blowback, and that means you!
Unfortunately, at the time of recording HB244 — the transphobic bathroom bill — is still in season…
Lucky for us Wyoming’s legislators list their phone numbers

“No teacher may be prohibited from helping students understand, analyze, critique, or review in an objective scientific manner the strengths and weaknesses of scientific information presented in courses being taught which are aligned with the content standards established pursuant to § 13–3–48 [the section of the state code that governs the state education standards revision cycle].”

Shea’s finally found a cure for blindness!!! – http://bit.ly/2knhupP
Patreon Story
Doom-Spraying Prophet Claims God Can Make Him Disappear From Jail – http://bit.ly/2knFolf
DOOOOOOOM
Jenn’s Story
I know it feels like every possible asshole on the planet has been headline news in the past few weeks, but good news! There are some more out there that you may not have heard of! This includes the human scrotum, Texas Representative Tony Tinderholt – http://huff.to/2knzS1R
He has proposed a bill to CRIMINALIZE abortion. This is in order to make women “more personally responsible” for their sexual activity. Per Mr. Swipe Left:

“Right now, it’s real easy. Right now, they don’t make it important to be personally responsible because they know that they have a backup of ‘oh, I can just go get an abortion.’ Now, we both know that consenting adults don’t always think smartly sometimes. But consenting adults need to also consider the repercussions of the sexual relationship that they’re gonna have, which is a child.”

He calls this bill the *Ugh *Abolition of Abortion Act. It would ban abortion at every single stage of pregnancy. It also amends the state’s penal code to allow women and providers to be charged with murder for the procedure. The bill has no exceptions for rape or incest because Tinderhold said he doesn’t think “there should be any exceptions to murder, no matter what.”
Although Texas Republicans recently declared it a priority to abolish abortion in the state, criminalizing the procedure would be blatantly unconstitutional.

Canada Celebrates 150th Birthday, Makes National Parks Free All Year Long – http://bit.ly/2knupIz
It’s either go big or go home with Canada, eh? – that’s why the country is celebrating its 150th birthday by allowing free admission to all national parks for the duration of 2017.
All you have to do is order a free 2017 Discovery Card admissions card from the park’s website (http://bit.ly/2kY4nie), and you’re good to go.
In addition to the National Parks event, Canada is also celebrating its birthday by announcing 150 different (http://bit.ly/2knAPqO) community greening initiatives.

“The environment is one of the major themes at the heart of the celebrations for the 150th anniversary of the Confederation,” explained the Minister of Canadian Heritage, Mélanie Joly. “Communities across the country will come together to carry out 150 community greening projects that include planting trees and revitalizing green spaces.”