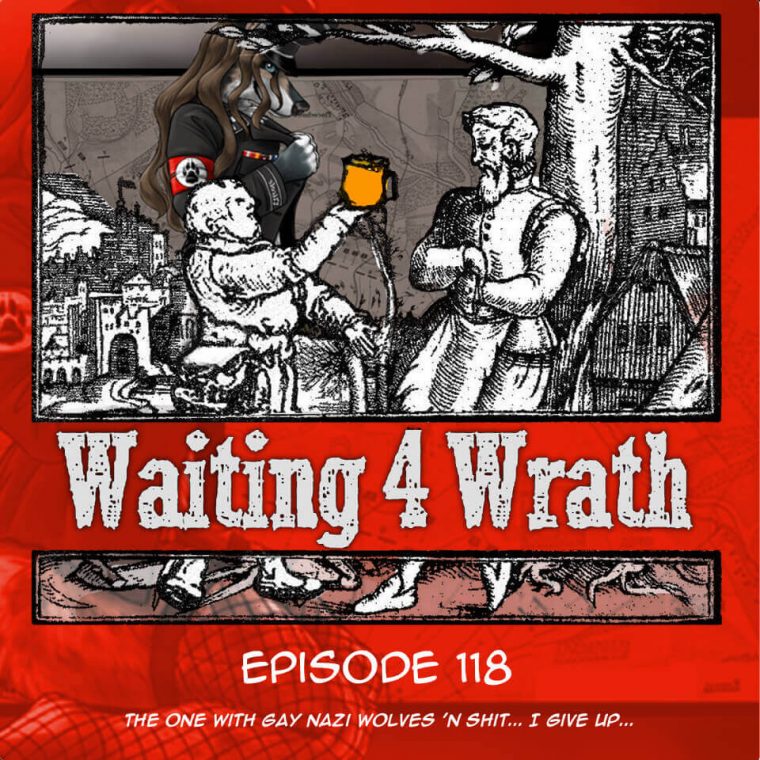 Episode 118 – The One WIth Nicely Trimmed Nazi Furry Dick Talk

Now, grab a beer and help us test the god hypothesis — because, while Zoroaster hasn’t struck us down yet, we are trying his patience!

Not sure who this Zoroaster feller is? Well, he’s not a horse riding, sword fighting hero of the people — he’s actually kind of a douche. Find out more at http://atheism101podcast.com

Shea’s Life Lesson
This week I learned that if you make eye contact with someone at the
urinal, ease the tension with just three simple words: “ Hey, cool
balls.”

Matt the Amazing from Atheism 101 is
joining us for Roundtable this week!

Patreon
New patron Zach is a bad ass!
And if you want to rock all the abs like Zach make sure you check out or
longer shows at http://patreon.com/w4w

The third review, thanks again for being the best podcast. I rate
podcast like most things in life. “Would I drink a beer with this
person or with these people”, and the answer is an overwhelming “yes”.
Keep up the great work and for the love of beer, y’all get healthy. I
don’t like beer but still, like this podcast

A group of like-minded friends sit and put the world to rights over a
beer. Love the podcast and the interplay between them. Cheers!

David the “Ox” – Raised a challenge responding to Jenn’s mention that
since we live at altitude, we can likely out-drink our sea-level living
listeners. He also sent a really nice photo with of he and his wife.

“I am responding to your challenge about being able to drink more
when y’all visit the reason con. Something about the altitude or some
nonsense like that. Well, challenge accepted. Bring it on.”

This heavy drinker (Thinker?) then proceeded to show us a whole bunch of
the beers he was drinking. We have our work cut out for us at ReasonCon.

Another message from Josh saying,

“Loving episode 117, listening to it while getting ready for work. I
have to say, I love the constantly changing backgrounds. Who is in
charge of that edit? A Beautiful touch.”

“There is nothing more that the American public needs that quality
adult content parodies to help them understand the ever-shifting
landscape of their Executive Branch of government.”

“The ability to harness both Trump’s complete understanding of all
issues without any actual knowledge of an issue is also an optional
trait.”

House votes stupidly, again, and not for the last time (probably this
week) – http://cnn.it/2kO3q8V

“The Social Security Administration not only overstepped its mission
with this regulation, it discriminated against certain Americans with
disabilities who receive Social Security benefits. The agency should
be focused on serving all of its beneficiaries, not picking and
choosing whose Second Amendment rights to deny.”

“I fully recognize that the contents of the service are at variance
with the doctrine and teaching of the Church of England and that is
hugely regrettable.”Inevitably for some members of the house, this
caused considerable upset and disquiet and I have spoken at length to
those involved in organizing the service.”I will be reviewing and
tightening the internal mechanisms of the house to ensure this never
happens again.”

The Furred Reich: The truth about Nazi furries and the alt-right –
http://bit.ly/2kO2mSy

“I didn’t take any consideration because of my lack of World War Two
knowledge,” he says. “I don’t think I could ever take it off at this
point, it’s so ingrained into my character, my fursona.”

“When people started calling me out a few years ago, I started to
troll real Nazis and see how would they react to furry that aligns
with them,” he says over Twitter. “What I got out of it was ‘go die
you mutt’, reason I could never support people like that.” I ask him,
does he hate black people?

“Their [sic] two parts to that one, in my normal day life not at
all,” he says.”But in my personal sexual life ‘I don’t like any race’,
which means I wouldn’t sleep with black man [sic]. Now my boyfriend is
mix black/Asian. I sleep with him just fine, when I was young I use
[sic] to be anti-gay. So why the change? It’s because he [sic] not a
‘human’; to me when I look at him. He [sic] a blue wolf.”

“There is not one thing that people refer to when they say
‘#AltFurry’,” says Qu Qu, a man in his late twenties who identifies
as a “Pooka” (a shapeshifter) and considers himself the leader of the
alt-furry movement.

“I rule with an iron fist and crush dissenters beneath
myfootpaws,”

“The furry ‘community’ is a fandom that has been overrun by liberal
‘tolerance’ and ‘acceptance’ and as aresultit’s becomesanctuaryto
hardcorepaedophilesand people with serious mental problems,” he
claims. “The furry fandom needs to become more vigilant, and having a
right wing is a big part of that.”

“I cannot believe what is happening,” Kleine-Vehntweeted.

“I felt that words are one thing, but we need deeds,” she says. “I
thought: Let’s get people together and do it in a big way.” And EMBO
was the perfect organization for it; it’s a prestigious network of
European biologists, and one of its goals is specifically to “enable
international exchange between scientists.”

“This has obviously struck a nerve,” says Leptin. “[The immigration
ban] contravenes anything that science stands for, the international
spirit of science. We feel sorry for the scientists who are affected,
and all the labs in the U.S. who don’t want this.”

Find out more at
http://www.embo.org/science-solidarity