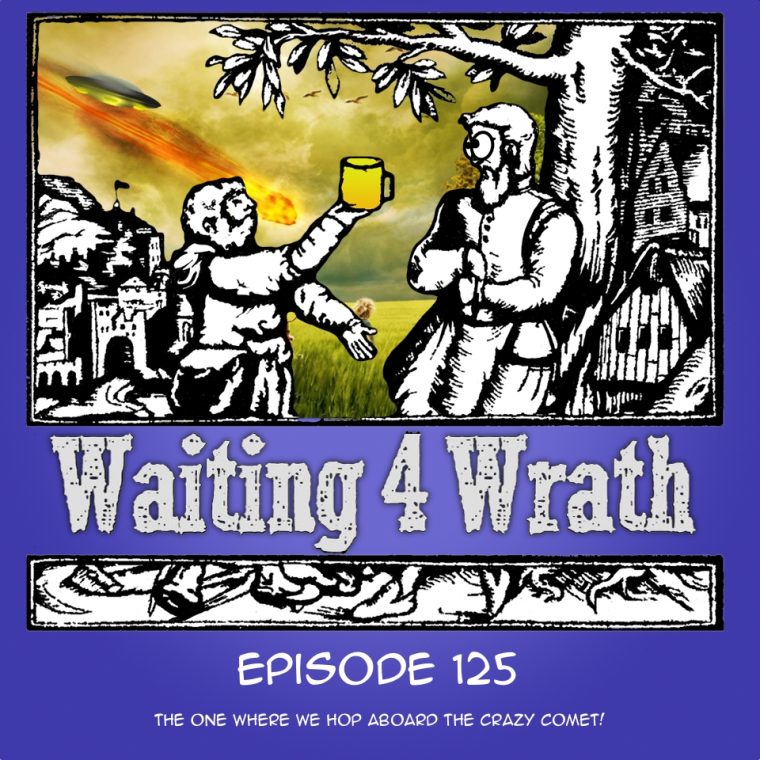 Episode 125 – The One Where We Hop Aboard The Crazy Comet!

In this week’s show, episode 125, Patty Robertson has too much to drink and hops aboard the crazy comet!

Now, grab a beer and help us test the god hypothesis — because, while Inti (the Incan Sun god) hasn’t struck us down yet, we are trying his patience!

Did you know that (despite many religious groups erroneous statements to the contrary) Scottish philosopher and historian David Hume did NOT have a deathbed conversion?

He died as he had lived, humorously skeptical of theology and disapproving of organized religion and superstitious beliefs.

In honor of Steve’s departed brother (in law).

Bits of beer news, thanks to listener Janet for writing in and giving me the saddest beer news ever…

Apparently, it was sold to a parent company, Constellation Brands, in 2015 that is a Super PAC donor to Paul Ryan – $25,000 so far this year. ‘Cuz these assholes aggressively destroy anything good and pure.

All hope is not completely lost. Via the San Diego news article Ballast Point the brewery has reached out via social media:

“Ballast Point does not support Paul Ryan, nor the healthcare bill.”

While our parent company, Constellation, does have a PAC that contributes to candidates on both sides of the aisle, it does so only in the interest of policy issues directly related to the beverage alcohol industry. The PAC’s primary goal is to educate lawmakers on the benefits of our industry as a whole—creating jobs and contributing to our economy.

That said, Ballast Point has no direct involvement or input into the actions of Constellation’s PAC.

Please know that our only goal as Ballast Point is to brew great beer and provide for our employees and our customers like you.

Unfortunately, the damage has been done, and it’s hard not to think that the money going to the delish beer that Ballast Point creates ultimately means a profit that can go to the forces of evil.

Speaking of people you should buy things from, by the time this airs you’ll be able to visit http://www.interestingiftrue.com/shop

We got a few unrelated txt’s from listener Tara this week — hope your hangover is a mild one :)

It’s almost like people have forgotten they can leave voicemails or text messages at theDrunk Dial Line: (513) 760–0463 or leave us an iTunes review!

We don’t like to beg for reviews but little podcasts like ours live and die by them….

Spoiler: It was withdrawn before even being brought to what would have been a failed vote.

(Thanks to listener Alan for sharing this story from WaPo.)

HL2 &HL3 Are Both Available Right Now On http://Patreon.com/w4w

Twenty years ago (on March 26) was pretty much the most exciting day for UFO religious groups in the United States. Anybody remember the Hale-Bopp comet? Well, according to the Heaven’s Gate organization, this comet was the herald of the UFO that would take humanity to The Next Level.

Heaven’s Gate was founded in the 70’s by Marshall Applewhite and Bonnie Nettles. Applewhite was raised a strict Presbyterian and was actually in seminary to become a minister when he met Nettles while they were both briefly committed to Psychiatric care. He pretty quickly decided to leave his wife and kids to explore being a bisexual New Age Prophet with Nettles (he totally understood the 70s).

It took them about 15 yrs to gain more than a follower or 2, but by the early 90s, there were a few dozen. Nettles and Applewhite, being huge sci-fi fans, decided to combine the Book of Revelations with some of the more fun elements of the Sci-Fi they enjoyed (such as Close Encounters of the Third Kind). A few of their basic tenants included our origins being from a different dimension and that humanity required extraterrestrial help to reach ‘The Kingdom of God’. They also would battle evil intergalactic demons called ‘the Luciferians’.

“Everything was designed to be… an exact duplicate,” surviving member Michael Conyers said later. “You were not to come up with, ‘Well I’m going to make the pancakes this big.’ There was a mixture, a size, how long you cooked it one side, how much the burner was on, how many a person got, how the syrup was poured on it. Everything.”

Conyers said that even male members shaved their faces a specific way. The Next Level would be genderless and asexual, and some male members underwent chemical castration to help control sexual urges.

At first, they denied they were a suicide cult and claimed that as long as they reached a certain level of higher spiritual attainment God would collect them in his UFO. They had to have healthy bodies in order to make this journey, so they would not have wanted to cause their own deaths.

Unfortunately, Bonnie Nettles was stricken with cancer that ravaged her body—causing her to lose an eye and control of most of her body. She died in 1985 with a body that no longer fit with their idea of God-UFO ready. So…back to belief evaluation.

Then in 1996, they received their final answer via a celestial event. The credible-about-anything-that-comes-across-his-desk Art Bell interviewed a gentleman who claimed that a UFO was following the approaching Hale-Bopp comet. Bell gave quite a bit of air time to this topic on his radio show, Coast to Coast (favorite of tin foil hat aficionados for decades) and it was decided that shit was going down Spring of ‘97.

Well, that settled that. The God-UFO was on its way and there was a time limit. In mid/late-March of ‘97, 39 members (including Applewhite) began final preparations to meet the Hale-Bopp UFO/God chariot.

A few days before the suicide event they had their final group meal at a Marie Callender’s in Carlsbad, CA. The menu (bc they had to all have the exact same thing) was iced teas to drink, dinner salads beforehand with tomato vinegar dressing and Turkey potpie for the entree. Cheesecake with blueberries on top for dessert. When they arrived back to their ranch each took the time to record a final good-bye video, explaining they were ascending to “The Evolutionary Level Above Human.” They dressed identically in black track suits and black and white Nike’s. Over the course of a couple of days, they began to commit suicide in groups, with the survivors tending them until the final group. They ate applesauce laced with barbiturates and washed it all down with vodka. To help things along they put bags over their heads and were covered in purple shrouds. They were found by a neighbor who received their final recordings in the mail.

Oddly enough, the group still actually exists. There were a few survivors from the California group and others scattered around the country. Their website is still active and is operated (such as it is) by at least a few of the members. (Feast your eyes on THIS visit to the 90’s: http://www.heavensgate.com/)

Reincarnation is also one of their tenants, so there may be hope for all of us who missed the last UFO pickup.

Today marked the opening of the newly inaugurated Carlos Jaúregui subway station. Located on the corner of Avenida Santa Fe and Pueyrredón, the stop was previously referred to as the “Santa Fe” stop on the H line.

Following a measure approved unanimously last year by the Buenos Aires City Legislature, the station was opened under its new name today by Buenos Aires City mayor Horacio Rodríguez Larreta. The opening represents a landmark step forward for the LGBT community in Argentina, and worldwide, as it is the first station in the world to be named after an LGBTQ activist or AIDS advocate. Carlos Jáuregui was an outspoken defender of human and LGBT rights and was the first president of the Argentine Homosexual Community (CHA).

The opening of the now rainbow-themed subway station in Recoleta was celebrated by mayor Rodríguez Larreta on Twitter, who said he was “proud” of honoring him this way.