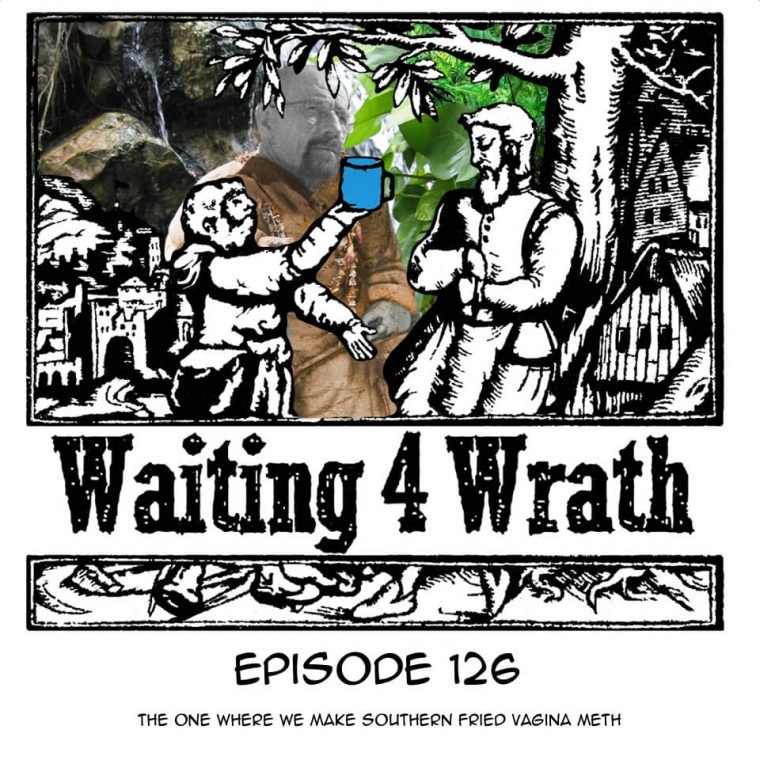 Episode 126 – The One Where We Make Southern Fried Meth

In this week’s show, episode 126, R-Kansas asks Methy the Monk’s wino parents if he’s old enough to rapture his own dick off.

Now, grab a beer and help us test the god hypothesis — because, while Tsukiyomi (the Japanese Moon god) hasn’t struck us down yet, we are trying his patience!

Did you know that the Concordat of Worms in 1122 settled the Investiture Controversy?

Basically, it removed some spiritual power of Holy Roman Emperors and returned it to the Pope, a sort of early step towards separation of Church and State.

I’m Steve and before we get to all that, let’s have a beer!

The funniest podcast ever.

We got a fun email from Dennis who recently vacationed in Florida.

He saw a few examples of our proud ‘Merica Jesus-heritage — his favorite being a sign that read “Silly bunny, Easter is for Jesus” which is kinda funny when compared to the signs he’s used to seeing like “Bereuet das Ende ist nah” which translates to “Repent the end is nigh”

Thanks for the lovely package Dennis! We’re glad you enjoyed our nation’s giant sunny wang-state and don’t worry, we won’t expect too much German beer :)

Thanks to his holiness the Napkin Pope for sending us a link to a great interstitial. We’ll definitely record that and use it when the time is right!

If you want to be as awesome as the Napkin Pope, Mark @usmagrad87 or Allan you can send us your favorite clips, stories you want us to cover (no promises) or anything else worth sharing by contacting us on…

If you wanted to interact with us one of the best ways is with our new store!

Closing out Round Table this week with stories!

I was on the most recent episode of Atheism 101 with the always amazing Bobby C from No Religion Required. He’s MC’ing ReasonCon this year, which should be a blast! So check out that episode … and be forgiving of my audio, there was a technical hiccup that really allowed by the throat fuck Matt & Tim’s audio quality this week … sorry guys!

A few months ago in Yangon, Myanmar A Buddhist monk was a–rrested after police found more than 400,000 pills of meth in the monk’s car.

A subsequent search of his monastery turned up 4.2 million pills — worth upwards of $4 million in street value — along with a grenade and ammunition. A statement from the office of Myanmar’s leader, State Counselor Aung San Suu Kyi, said that one million kyats ($769) in cash was also found in the vehicle.

Myanmar is a major producer of methamphetamine, usually smuggled from the northeast to neighboring countries. It is also the world’s second biggest producer of opium the director-general of the Religious Affairs Ministry, Soe Min Tun, acknowledged some surprise. “It is not a very common case, but not impossible to happen. What will happen to the monk is that he will have to give up his monk-hood right away and face trial as an ordinary person,” he said.

Police in Lexington County, South Carolina, said Judith Elizabeth Richards-Gartee was allegedly so intoxicated during class on Friday that she reportedly vomited on the classroom floor, according to WIS TV.

Administrators at Brookland-Cayce High School in Cayce called police around 9:45 a.m. after noticing Richards-Gartee allegedly acting in a manner that suggested she might be under the influence of alcohol.

Besides the alleged vomiting, Richards-Gartee was reportedly unable to stand. School officials removed her from the classroom in a wheelchair and sent her to a school resource officer, according to TheState.com.

A deputy from the Lexington County Sheriff’s Office reported seeing a box of wine in her purse. Students in the class told the officer Richards-Gartee was allegedly consuming the wine during class.

HL3 – Do Not Pass Go, Do Not Keep Your Dick, Go Directly To Jail –http://argusne.ws/2oX1Qmd

A man who accidentally shot himself in the penis in 2015 was sentenced to five years in prison in October after lying about the incident.

When questioned by police, the 43-year-old said he was shot by “a black guy (who) tried to rob” him while he was taking out the trash at his apartment.

Officers went to Watson’s apartment in the 1500 block of East Nye Street to look for evidence and witnesses to corroborate Watson’s story. No evidence of a shooting was found near the dumpster. A witness told officers he heard screams of pain coming from Watson’s apartment about 1 a.m. that morning.

Check it out at http://patreon.com/w4w

Pakistan or the Midwestern ‘Merica?

The first bill (Senate File 471) was set to ban abortions after a detectable heartbeat (about 6 weeks) and also stated that life begins at conception, granting the fetus personhood. Additionally, it required minors to get parental approval, which is not that unusual. However, the verbiage also included a fun little addition to parental approval for women who were “unmarried at the time the abortion was performed or attempted”.

So… spinsters need not apply.

Happily (ish), the bill was rejected and replaced with a slightly less awful bill, which has passed this committee and is on it’s way to a full vote. The updated bill bans abortions after 20 weeks (which some health exemptions), also states life begins at fertilization and would subject physicians who perform abortions after 20 weeks could be reported to a medical board.

No word on how this applies to the sad and lonely women who are not taken in holy matrimony.

An additional statement on Iowa’s SF 471 and how goddamn incompetent their legislators are. Let me introduce you to Republican Rep. Shannon Lundgren — the manager of 471 — and what happened when she faced a question from fellow Rep. John Forbes, a Democrat. From Newsweek:

“Noting that he has a daughter who is 20 weeks pregnant, Forbes asked that under the bill, would his daughter have to carry her child to term even if a doctor told her there was no longer a heartbeat. “Is that good medicine?”

“This bill wasn’t written for the intent to protect or govern on the side of the woman. It was written to save babies’ lives, giving the choice and being the voice of those babies…that don’t have one. I understand what you’re saying—this fetus, this baby, is not alive. I would concur that in that instance, if your daughter’s life is not in danger, that yes, she would have to carry that baby.”

Let THAT sink in. Also, NOT ONE other legislator called her out on this.

R-kansas Interrogates Your Cervix: Sex Selection and R U DTF?

The Governor of Arkansas, Asa Hutchinson, signed into law a measure that would impose fines and prison time on doctors who perform abortions that are based solely on whether the mother wants to have a boy or girl.

I’m skeptical this is a thing. Seriously. But here is how the process would supposedly go: “Under the new law sponsored by Republican Rep. Charlie Collins, a physician performing the abortion would ask the patient if she knows the sex of the child. If she does, the doctor must let her know that it’s illegal to have an abortion based solely on gender.

The physician would then have to request the woman’s medical history related to her entire pregnancy history. Under the legislation, the abortion can’t be performed “until reasonable time and effort is spent to obtain the medical records of the pregnant woman.”

Doctors who violate the ban could face up to a year in prison and up to a $2,500 fine, as well as civil penalties. The woman who receives or attempts to receive the abortion wouldn’t face any criminal charges.”

Considering how Arkansas is gratuitously awful, this bill is actually pretty tame. It’s not the first state to ban sex-selection (but the pregnancy interrogation may be a new thing). Here is a list of the other states who are preventing us from becoming China: Arizona, Kansas, North Carolina, North Dakota, Oklahoma, Pennsylvania and South Dakota

announced on International Women’s Day, all firms with more than 25 staff will be required to obtain certification of pay equality. The law will apply to both public- and private-sector employers.

Thorsteinn Viglundsson, Iceland’s minister for social affairs and equality, commented that: “We want to break down the last of the gender barriers in the workplace. History has shown that if you want progress, you need to enforce it.”

Currently, women in Iceland earn 14% to 18% less than men. The government has pledged to close this gap by 2022.

The country, which has a small population of around 330,000, has been consistently ranked as one of the best countries in the world for gender equality by the World Economic Forum.