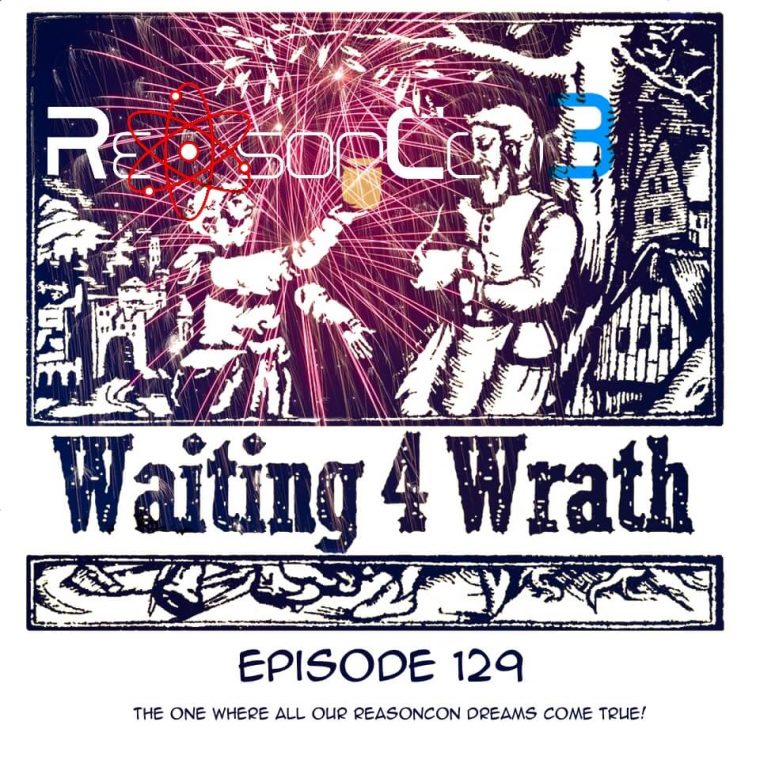 Episode 129 – The One Where All Our ReasonCon Dreams Come True!

In this week’s show, episode 129, we’re back from seeing our witch-doctor at ReasonCon 2017 to wrap up our curse-free journey through America’s plan B!

Now, grab a beer and help us test the god hypothesis — because, while Crock E Dile, the Wrathful Studios god of crock-o-shit headlines, hasn’t struck us down… this episode… we are trying his patience!

You shouldn’t actually drink like a fish in the south – people fry fish there, just like my brain, my brain on southern booze….

Did you that, somewhat surprisingly, 48% of citizens in North Carolina identify as religious? The Southern Baptist Convention is by far the biggest slice of the godly pie.

Speaking of people who helped get us to ReasonCon we can now count Daniel (AKA Mr. Bible Pants) of Country Fried Freethought Podcast to our list of incredible people!

It was great chatting with you a ReasonCon, listened to your hotel chatter today, good stuff.

He also left us a voicemail!

I sympathize with you on the not talking about it at work. That can be a bit touchy which is a shame because ReasonCon was an amazing group of insta-friends! We hadn’t even got our luggage out of the car before we ran into a few people we knew, nor had we had even made it to our room before making new friends and we’re glad to count you among them!

We also got another German lesson from German Dennis!

That’s a dangerous business you’ve got there Dennis, trusting Shea…

I’m glad you like each week’s cover art! We’ve used it as message space a few times in the past but it doesn’t really serve a purpose beyond its being one more place for me sneak in a laugh or something.

The artwork each week is usually inspired by some element of the show as I create it along with the show notes post-edit. It also helps us keep the archives on the site interesting with cool cover flow animation and such, which is I suppose — if anything — the real reason we started to do that. Enjoy this week’s – it’s colorful

Before we get to ReasonCon, thanks to a follow-up PSA from Candace (who happens to be a mortician):

Regarding last week’s story on ‘smoking wet’ or joints dipped in PCP, also known as ‘embalming fluid’, but not TECHNICALLY embalming fluid: “I wanted to clarify in case anyone really stupid is listening – embalming fluid should not be smoked. It’s sometimes used as a carrier to dissolve PCP in, and PCP is sometimes referred to as “embalming fluid” even when it hasn’t been mixed, but formaldehyde is a gas and will dissipate from the embalming fluid as it dries in open air, which is also how it penetrates tissues during embalming. Heat causes it to gas off more quickly, and even at 50-60° (room temperature for a mortuary) a small amount of embalming fluid will cause your eyes to water, throat to burn, and will remove your fingerprints if you get it on your fingers. NOT something that should be inhaled.”

So yeah. Basically, that’s all terrifying and you shouldn’t do drugs! M’kay!

Just for Steve’s information as to the Divine Napkin’s stance on sanitary napkins, it was revealed some time back, on the Scathing Atheist, that we did, in fact, evolve from filthy monkey napkins and sanitary napkins. Though Napkinism treats this teaching as allegory, trusting science for actual facts.

Speaking of the Drunk Dial Line: (513) 760–0463, we should probably mention that we don’t actually expect or require you to be drunk to dial it. While fun we really only started calling it that because we think it’s funny.

Moving on to iTunes reviews — it’s an amazing week for communications with us apparently, keep it up — we got a great review from a recovering Catholic!

Shea is my spirit animal

Take 2 because I don’t think this came through before. I love this show. I went through the backlog of this show faster than any show before. As a lover of beer I love the beer reviews, just can’t always find them in NJ. As an atheist, I enjoy the mockery of religion. The only downside now is I have to wait until Friday now to listen to an episode. Which makes feeding my herd that much better at the end of the day. The last thing I will say is, without a doubt, Shea is my spirit animal. So keep testing that god hypothesis.

So yeah, it was a pretty amazing week for us as far as interactions go. Thank you all!

I’m giving this one 50/50 on being real, but fuck it. Witch-doctors are funny and I can’t let Shea be the only one who does dubious research! I wasn’t kidding when I said we might be playing two truths and a lie, and games should have prizes. So, if this turns out to be bullshit the first 5 people to let us know will get the patreon cut of this week’s show in return. All kidding aside though we will be at least trying to get it right…er going forward. ~ A

First, we have to give a deeply felt thank you to Gene and all who worked with him to make Reasoncon 3 possible!

We also need to thank the MC Mr. Bobby C for being the best damn guy you’ll ever meet.

Listen to what they do at https://noreligionrequired.com

We have to begin with meeting our friends Matt and Tim of Atheism 101!

Guys, you’re the best, we had a blast. Next time we’ll bring the silly string — see what you’ve started… but truly, it would have been worth it just to hang with them!

Beth and Heretic Woman from Beyond The Trailerparkhttps://www.youtube.com/watch?v=4rplxdPcU8Y

You’re absolutely the best! We had a blast laughing with both of you and we can’t wait to see you again!

We know, we know. Interview

If ever there was a tip of the hat story…

Mumbai: A doctor has been feeding 500 old needy people daily for a decade – http://bit.ly/2p1CRB3

From Faith In Humanity Restored, the Vada Pav or wada pav is a vegetarian street food. It’s basically a local version of a fried potato ball slider with green beans and sweet chutney. The buns are basically dinner rolls.

I think we’ll be making this over the weekend. I Found the recipe here:http://bit.ly/2psfoJT I’ll post pictures on Facebook if it’s worth bragging about. If anyone else gives it a go I’d love to know how they turned out! ~ A