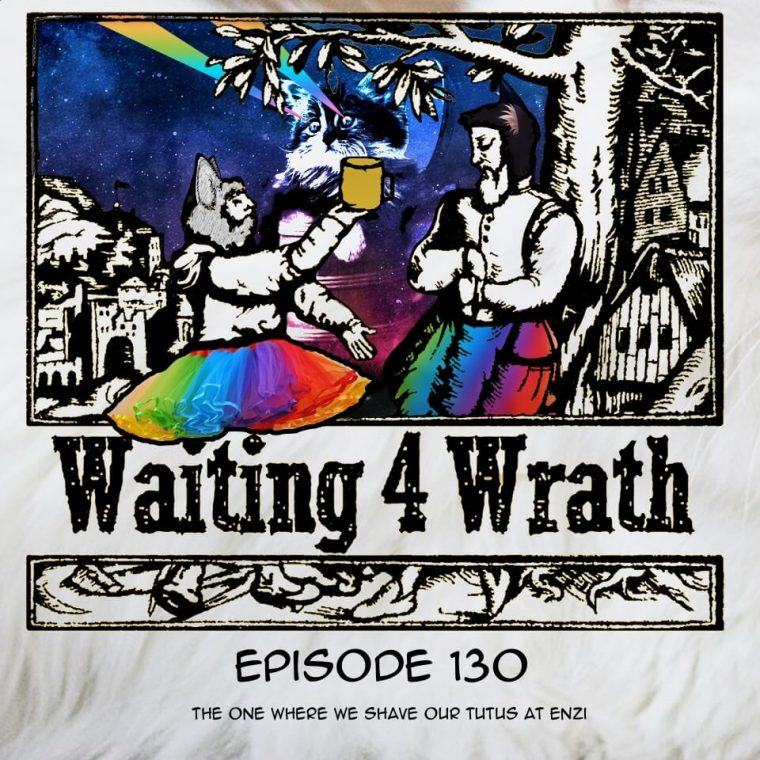 Episode 130 – The One Where We Shave Our Tutus At Enzi

Now, grab a beer and help us test the god hypothesis — because, while Hippolyta, Wonder Woman’s demigod momma, hasn’t struck us down yet, we are trying their patience!

This week I learned that hidden inside most human bodies is an entire skeleton.

Yeah, you read that right. Shea didn’t update it to be the one about the zombie. ~ A

Speaking of, He left us an iTunes review!

See that. Big “H” Dave — that’s because begging you for favors actually works.

5-star Review – By David the Oxford

Thanks for still being the best podcast. Everyone who likes being entertained will love this show and will come back wanting more. Thanks again. David the o

Shirts are selling like hot cakes … which we don’t actually sell because Steve wouldn’t let me set-up the propane burners in the studio — thanks, Steve… and Obama I’m sure. but we do have coffee mugs as well, so that’s kinda breakfast-y.

We also have the Amazon link! If you do any shopping on Amazon visit interestingiftrue.com first and get there with our link – you won’t pay an extra penny but Amazon will cut us a bit of their profit for sending you to them!

“But Aaron,” you say “ReasonCon is over why are you whoring shit already!?”

Well, that’s because we need to raise money for good causes like WyoAIDS, the local Planned Parenthood, and The Trevor Project! Following in the footsteps of our friends at Atheism 101 we’ll be donating a billion dollars per month! Muahahahaha!

In a bizarre case that so far has police and residents stumped, at least seven cats in Waynesboro’s Tree Streets (VA) neighborhood have been shaved since December without their owners’ permission.

None of the pet owners have seen the person or people shaving the cats, and no witnesses have come forward yet.

cats owned by two separate Tree Streets residents have been shaved in the underbelly, groin and leg areas. He said it appears the shaving was done with a razor of some kind. The cats were not otherwise harmed

“Collectively, this involves seven cats that are indoor and outdoor cats,” the Police Chief said.

After WWII had ended, The Klu Klux Klan began to grow and became more violent. This didn’t sit well with activist, Stetson Kennedy who vowed to take the giant on. Stetson went undercover and actually joined the Klan in order to learn all their secrets and tactics.

After collecting all this information, he quickly realized the police would not help him in taking the Klan down. Looking for a way to publicly expose the klan, he turned to a popular radio show centered around Superman.

He had hoped the radio show would develop a story in which Superman battles the Klan while simultaneously exposing all of their real-life secrets and lingo.

The radio show agreed to the story and developed a 16-part series titled, “Clan of The Fiery Cross.” The radio show subsequently harmed the Klan and their recruitment efforts.

According to Deadline, Rick Bowers’ young adult novel – Superman Versus The Ku Klux Klan: The True Story of How the Iconic Superhero Battled the Men of Hate – is being produced by Lotus Entertainment and PaperChase Films.

“Fighting the forces of evil with brain over brawn, artists taking down bullies and the power of a good piece of content, it’s a real case of truth being cooler than. We’re excited to develop the thriller elements of the film in the vein of The Departed and Mississippi Burning.”

I caught a story in Salon today that merits a brief discussion. Called “Alt-right hopes to organize street-fighting goon squad: Is it more than macho posturing?”, Right off the bat, I had a couple of issues before even getting into the meat of the story itself. First of all, I despise the term alt-right. It is a word they appropriated by Richard Spencer (well-known pig-fucker) because neo-nazi sounds too harsh. They are at the very least white supremacists, but also tend to hate many of the “other” such as Jews, gays, immigrants. That sounds pretty neo-nazi to me.

Anyway, once I got into the story I found it is about groups of haters who feel it is their duty to form into gangs to protect another nazi’s in public from the dangerous lefties, who are apparently well known for starting fights and scaring the poor conservatives as they go about their constitutionally protected free speechifying, though reported incidences of this happening are exceedingly rare. They are just spoiling for a fight.

One group, called Fraternal Order of Alt-Knights (or FOAK), was started by Kyle Chapman, who in march dressed up as one of the batman impersonators from The Dark Knight, then beat up a fucking lefty protester near UC Berkeley. He was then was arrested for felony assault with a deadly weapon, carrying a concealed dirk or dagger, assault with a taser, and assault with pepper spray, and has now become a neo-nazi poster boy hero. He says the group is, “dedicated to “defense and confrontation” in the streets.”

Then just a few days later, another group, the Proud Boys Network, was co-founded by professional dick-head Gavin McInnes who is a member of the right-wing website The Rebel Media, and who recently showed up in a video where he was attempting an elaborate apology for Holocaust denial and anti-Semitism. McInnes calls for “strong minded men who are comfortable with fisticuffs” to join.

I don’t think it’s too hard to see where I’m going with this. If one has spent any time studying history, then there is a really obvious parallel between these fuckers (as well as with groups like the southern border vigilantes) and the brownshirts who’s terror tactics and brutality fueled the rise of the original Nazi party.

A major difference here is that the little orange micro-penis is not Hitler. He’s not smart and he’s shit at politics so there seems to be little chance of him destroying our institutions the same way the third Reich destroyed the Weimar republic. Another huge difference is access to information, which today is literally light speed ahead of where it was in the early 1900’s.

The Salon article ended with a couple of examples of fighting these fuckers with mockery rather than fighting them and acting as they think we are. Instead, do as in Olympia, Washington in 2005 and show up dressed as clowns and mock goose-stepping soldiers, or just do as in 1993 in Austin, TX and just moon the assholes in mass.

Alarmed by reports that a computer program has “learned” to play Texas Hold ‘Em so efficiently that it can now defeat professional poker players, Rick Wiles lost his fucking mind on ‘Trunews” a radio program he runs that’s so full of bullshit they didn’t even bother spelling “true” correctly

Because Texas Hold ‘Em involves bluffing, Wiles is convinced that computers are now learning how to lie—and since Satan is “the father of all lies,” it stands to reason that we will soon have “demon-possessed artificially intelligent robots” controlling the world.

“If you have a machine that is capable of lying, then it has to be connected to Lucifer,” he said. “Now we’re back to the global brain. This is where they’re going. They’re building a global brain that will embody Lucifer’s mind and so Lucifer will be deceiving people through the global brain.”

Also, because he’s fucking insane, demon-possessed robots will soon start replacing human workers. Which will, apparently, not result in a utopian future of leisure but one where the “deep State’ whatever the fuck that is, will just murder the dicks off of the unemployed of otherwise unneeded people.

“I’m going to tell you where I think this is going,” he said. “I think the deep state planners have already figured this out and they have scheduled a massive war to eliminate tens of millions, perhaps hundreds of millions, of useless eaters. I really believe that.”

Which is why you’re fucking insane Rick.

Psychic Tries To Prove His Immortality … Doesn’t See It Coming…http://bit.ly/2pCYYww

Theprit Palee, 25, had been performing the traditional spirit dance in front of spectators in Chiang Mai, northern Thailand

The folk ritual is believed to honor the ghosts of ancestors

It’s done by stabbing yourself with a sword

Now, the trick here is, as he did in other shows, the blade of the sword broke when it was pressed against his chest – because it’s fucking fake

But on this occasion, the act went wrong and the weapon failed to snap causing the 25-year-old to stab himself in the chest.

According to Noom Udorn, Mr. Palee had provided readings for several years to local people. Readings that apparently never included “hey, don’t fucking stab yourself with a sword stupid”

‘This is a tradition that happens every year. The sword normally breaks but this time it went inside him,’ he said. ‘The medium has been respected for many years. People love him. He is one of people’s favorites.’

The police were called and they tried to save him. But when you have a sword in your fucking heart that’s pretty much it. He died at the hospital, presumably to the sounds of nurses and doctors scratching their heads — after all, he should have seen the sword-robe malfunction coming right?

And the first 5 astute listeners! Did you catch my 007 joke? Let me know what movie it’s from and we’ll send you the download link for this week’s patreon.com/w4w cut!  ~ A

Don’t Be Mean To People – Ponysaurus

Supporters of LGBTQ equality wore tutus across Wyoming Friday to protest Sen. Mike Enzi’s comment that men who wear tutus into bars are asking to be assaulted.

“Honestly, this is what we do in Wyoming. Straight men all over the state are going to be joining their LGBTQ siblings and wearing tutu’s, buying their queer friends drinks and having a great time,” Equality Wyoming’s Sara Burlingame wrote. “It is a great time to be in the Equality State where we talk out differences and show up for each other — with or without tutus.”

For Wyomingites, Enzi’s anecdote wasn’t random. It instantly called to mind Wyoming resident Sissy Goodwin, a retired professor and well-known cross-dresser whose story has been featured by media outlets like NBC and The Washington Post.

Goodwin donned a bright green and yellow petticoat when he joined participants in a statewide protest dubbed #LiveAndLetTutu, after the state’s “live and let live” culture.

A number of bars here in little Laramie Wyoming participate too (well, most I think) and donated the proceeds of tutu-shots to WyoAIDS.org – the charity that Big Gay Jim runs and has mentioned on-air before. If you want to know more about what Wyoming AIDS Assistance does and how you can help out visit https://wyoaids.org