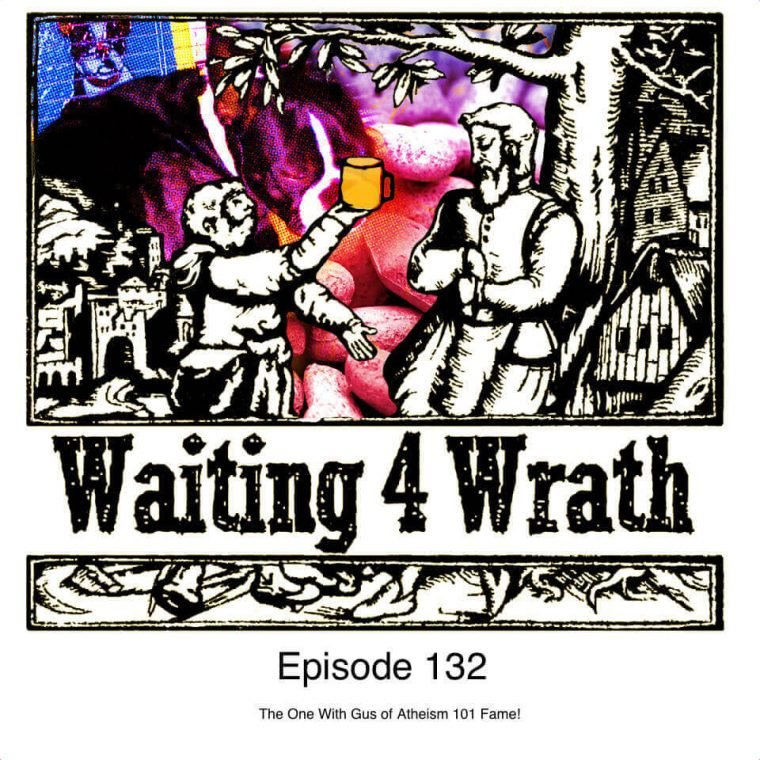 In this week’s show, episode 132, we cure Scientology’s constipation by burning the evil right out of their dolphins.

Now, grab a beer and help us test the god hypothesis — because, while Ratri, the Hindu goddess of the night hasn’t struck us down yet, we are trying her patience!

This week I was walking and a man in front of me dropped some money, I thought, what would Jesus do. So I turned it into wine… well, I bought wine.

Did you know that the ancient Roman cult of Mithras left no written records? Much of what we know about the (male-only) cult is through excavated artifacts. One of the best collections was discovered under a construction site in London in 1954. (Considering how they also found the skeleton of King Richard III under a parking lot, London needs to stop losing important shit.)

Voicemail from Rebecca apologizing to Jim.

We recorded last week with Jake Farr-Wharton of:

Don’t forget to follow them on the socials too!

“The workers there, the manager and other staff were Scientologists, there was a great deal of Scientology paraphernalia found throughout the facilities,” said Trevor Lynch, Assistant District Attorney.

I Found Us A Church– http://bit.ly/2rxsJPw

Plenty of people screaming “oh God!” … fewer people praying than you might expect. Find out how that went at Patreon.com/w4w!

This shit is straight up terrible but we still found more than a few terrible jokes – and Matt & Tim manage to make a point or two too! Available now at Patreon.com/w4w!

Jenn’s Story: I Give Up, Here’s a Story About Genitals

Let’s talk science. And sex. And sexy science. Most people have heard that dolphins are one of the few other species who have sex for pleasure, but there’s actually a whole lot of other freaky going on. Whales and dolphins have surprisingly interesting sex lives, replete with various positions, elaborate vaginas, and a rare type of penis that’s always mostly erect.

Dara Orbach (a postdoctoral fellow at Dalhousie University in Nova Scotia and research associate at Mount Holyoke College in Massachusetts) has spent the past seven years of her professional career studying dolphin vaginas. Patricia Brennan and Diane Kelly are two women who have studied dolphin penises. These three women have joined forces in an attempt to crack the code on how dolphins do it.

Why the questioning? Per Science Alert:

“For starters, dolphin sex takes place under trying circumstances. The animals must properly connect despite ocean currents, and salty seawater, which is lethal to cetacean sperm, must be kept out of the uterus. What’s more, dolphins, porpoises and whales have vaginas with extremely unusual twists, folds, and recesses that sperm must traverse to make a baby.”

So how do 3 science ladies go about understanding the…um…ins and outs of underwater copulation? I’m glad you asked! It involves dead bodies and beer keg pumps! Orbach collected reproductive tracts from dozens of dolphins and porpoises who had died of natural causes.

Side note: My favorite quote “Surprisingly, it’s not a very popular field to look at dolphin genitalia,” Orbach said.

“Kelly, who has also studied alligator and armadillo penises, came up with the idea of inflating the male organs, which are also twisty. The team did so with a pressurized pump — one more like a beer keg than the kind used to inflate bike tires — and then fit those into the matching vaginas.”

Now, what could be biologically advantageous to make successful intercourse so difficult? Females even have a way to twist their bodies to make sure the attempt fails. (Dirty cetacean teases.)

“Because they have lot of suitors, and reproduction is time-consuming. At the height of their fertility, female cetaceans mate as many as 15 times in 15 minutes with two or three males, Orbach said. Pregnancy lasts 11 months, and calves are nursed for two years.”It’s a very substantial investment of a female’s life in her developing fetus and calf as well,” she said. “So from a female’s perspective, she wants some way to control who’s going to be the father.”

This information could help conservation biologists study how endangered species need to reproduce in captivity and is also just a fun fact to pull out at cocktail parties where you don’t know anyone but want to test the crowd.

Submitted By Listener Bill: Legally Blind 4th-Grader Gets Gift Of Sight For His Birthday – https://yhoo.it/2qYxFAj

A legally blind fourth-grader in Tennessee got the birthday gift of a lifetime recently when his school surprised him with glasses giving him perfect vision.

“These glasses brought me from a faraway distance of 2,200 to 20/20,” Andrew told ABC affiliate WATE-TV recently. “This would make things a whole lot easier, from reading to just playing games in class, on the computers.

The eSight3 eyewear came with a visor, equipped with two cameras, that goes over Andrew’s regular glasses as well as a hand controller and a dial that lets him zoom in and out. The visor also has a light and a freeze-frame option.

Andrew has ocular albinism, which affects his hair, skin and eyes.

Renee Powell, a teacher at the school, told WATE-TV that the school had helped put together a fundraising site on GoFundMe after learning that Andrew’s parents could not afford the glasses.

“We knew as a community we could do it because we have a small community but we have big hearts and we love our community members,” Powell said. “Andrew is one of the most special, little guys I’ve ever worked with. … It’s just a dream come true for everyone here in our community.”

P.S. For those wondering who Gus is, you should check out recent episodes of Atheism101Podcast.com

Also, sorry for the late posting. It was scheduled as usual and… just… didn’t… post. Weird. ~ A