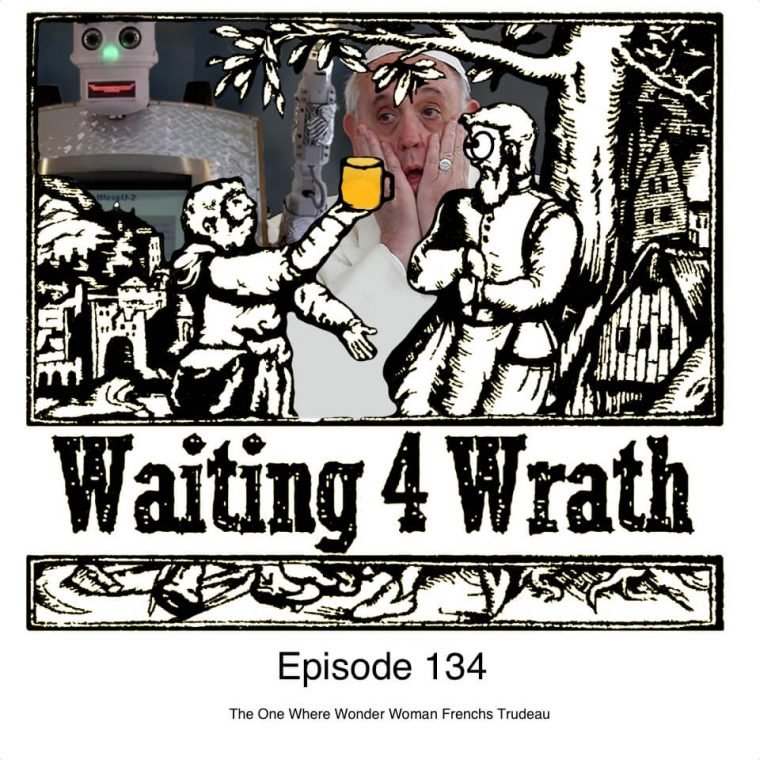 Episode 134 – The One Where Wonder Woman Frenches Trudeau!

In this week’s show, episode 134, we head out for more heady headlines!

Now, grab a beer and help us test the god hypothesis — because, while Ares (Greek god of War and father to Amazonian Queen Hippolyta) hasn’t struck us down yet, we are trying his patience!

This week I learned that when you are sauteing kale you should use a bit of coconut oil, that way it won’t stick to the pan when you are throwing it in the garbage.

Did you know that the actual existence of the fabled Amazonian warriors is still being debated? Greek historian Herodotus (sometimes called ‘the father of history’) fully believed they were a real nation. Additionally, multiple burial sites found in Eurasia dating from the 3rd-6th century BC were discovered in the mid-90s. These sites contained scores of skeletons of women, buried in armor with daggers, bows and other weaponry, many with bowed legs from long hours spent on horseback.

In case you can’t tell, I’m ready for the Wonder Woman movie.

Also, thanks to Martin for sharing on Twitter, a movie based on the story of Gisette Perl ‘Out of the Ashes’

Aaron and Jenn are recording with Cog Dis this week, so look for that. We’re not sure when the episode will air (Monday) but we’re sure it’ll be a riot.

Our first episode with Jake Farr-Wharton on his show, Imaginary Friends Show aired this week. That’s episode 402 if you’re interested. We’ll also be on next week, so enjoy.

Speaking of, if you’re new here from the iFriends show please be aware that we’re a bit of a variety show and we most certainly don’t produce a ‘clean’ show. So if you can stand the language, laugh, think, and drink along with us!

Huge thanks to James and Susan for not letting the previous death and destruction of their other beer shipment to deter them from sending us their beloved Shipyard beer. And a little friend for Shea.

We talked about West Virginia’s Mercer County Schools in episode 125, regarding their teaching an “elective” bible class to elementary and middle schoolers.

Well, the class has been suspended for a year while administrators decide whether it’s actually legal, the result of a lawsuit, from the Freedom From Religion Foundation. In the meantime, the District is still trying to dismiss FFRF’s lawsuit. There will be a hearing on that matter on June 19. Don’t worry, it’s obviously illegal…

Thanks to listener Michael for sharing this story with us.

JASPER COUNTY, S.C. Two men in South Carolina are facing criminal charges for forcing beer down the throat of a young alligator, according to the South Carolina Department of Natural Resources.

the men posted a photo of the alligator chugging the beer to social media. A short time later, the SCDNR started getting calls, messages, and screenshots related to the incident.

After forcing the juvenile gator to drink the beer they released the reptile back into a pond and watched it swim away.

Joseph Andrew Floyd Jr., 20, and Zachary Lloyd Brown, 21, are facing a misdemeanor charge of harassing wildlife. The men face a maximum fine of $300.

Mexico City-based attorney Antonio Battaglia said he was spurred to action after Trump’s assertions during the presidential campaigns that certain Mexicans are “bad hombres.” “I was very annoyed, and I started looking for a way to do something that had an impact, not in a tone of mockery or bad revenge, but in a positive way,”

Battaglia has developed a prototype featuring a plucky little cartoon character shaped like a toilet roll and plans to produce the TP by the end of the year, distributing it to grocery stores and donating 30% of proceeds to deportee aid groups.

Well, it isn’t Ph.D. in make boats float, that’s for sure! http://patreon.com/w4w

Alamo Drafthouse is the best, most awesome theater chain in the galaxy. And some men are teeny-tiny-whiny babies.

What can they touch? Why http://patreon.com/w4w of course!

Technology is again challenging religious tradition in the small German town of Wittenberg.

the robot, called BlessU-2, is intended to trigger debate about the future of the church and the potential of artificial intelligence.

“We wanted people to consider if it is possible to be blessed by a machine, or if a human being is needed,”

Stephan Krebs of the Protestant Church in Hesse and Nassau

The robot has a touchscreen chest, two arms, and a head. For the past 10 days, it has offered blessings in a choice of German, English, French, Spanish or Polish. Worshippers can choose between a male or female voice.

The robot raises its arms, flashes lights, recites a biblical verse and says: “God bless and protect you.” If requested, it will provide a printout of its words. A backup robot is available in case of breakdown.

“The idea is to provoke debate,” said Krebs. “People from the street are curious, amused and interested. They are really taken with it and are very positive. But inside the church, some people think we want to replace human pastors with machines. Those that are church-oriented are more critical.”

The “mentally ill” vs. “zealous terrorist” argument has finally made it big time — to video games that is.

Ignoring 40 some years of violent video games from Custer’s Revenge to God of War’s giggle cutscenes it looks like we’ve finally found the line — you can’t shoot back at alt-right Christian militia cults, even if they’re full-on homegrown terrorists.

The first promo video for Ubisoft Montreal’s fifth edition of Far Cry dropped this week and it’s more beautiful than ever.

Montana isn’t another exotic island (Far Cry, Far Cry 3, Far Cry Instincts) or an African savannah (Far Cry 2), and its gun-toting Christian cult leader isn’t another Bhutanese warlord (Far Cry 4). For the first time, Far Cry — which appeals plentifully (but not exclusively) to gun-obsessed males — appears eager to challenge its audience with a disturbing reflection of extremism in America.

Apparently, that’s a bridge too far…

There’s now a Change.org petition calling for Ubisoft to alter or cancel this “Anti-American” game.

It calls an “an insult to [Ubisoft’s] fanbase.” It asks for the villains to be more multi-ethnic (if not outright making them minorities) — or to be misunderstood heroes, because to leave them as antagonistic, religious Americans is “unrealistic.”

The villains shown so far are a religious/nationalist cult — who consider themselves misunderstood heroes — who’ve trampled all over innocent locals. Not unlike, the Rakyat warriors from FC3 and Pagan Min’s army from FC4. This is all business as usual for Far Cry — with the sole exception of nationality.

Republican congressman won’t say if all Americans are entitled to eat, but you can chow down on the story at http://patreon.com/w4w

Parents who choose not to vaccinate can enroll their kids in private schools or homeschool them. The rest of the country can stay safe.