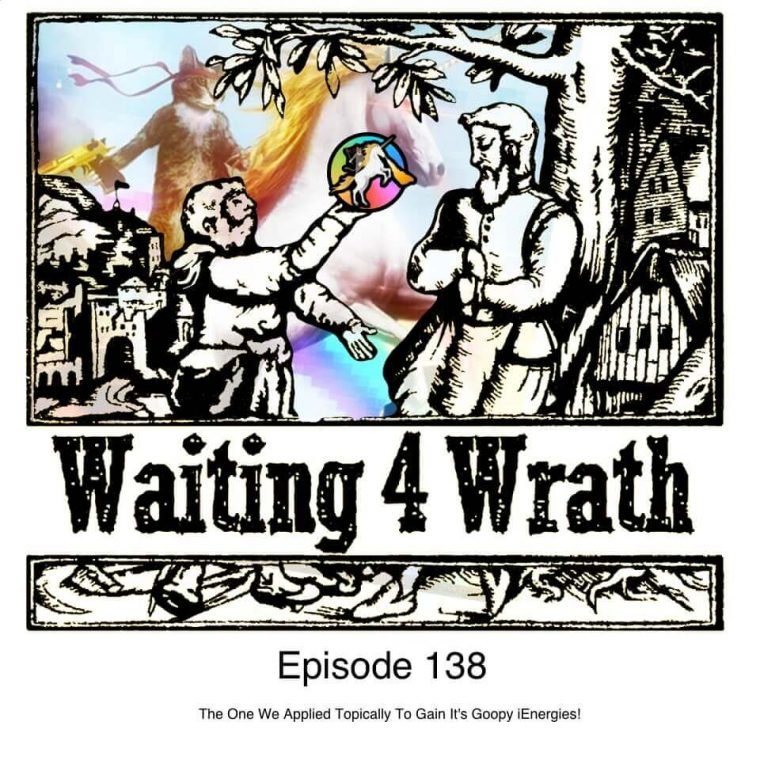 Episode 138 – The One We Applied Topically To Gain It’s Goopy iEnergies!

Now, grab a beer and help us test the god hypothesis — because, while Proteus (Greek Old Man of the Sea) hasn’t struck us down yet, we are trying his patience!

Shea’s Life Lesson
This week I learned that it’s not PC to call someone a tweaker. They are ‘Methican American.’

Jim’s Good Gay News
Um…I’m having a hard time with good news this week. Instead, I have a public service announcement. We’re recording on National HIV Testing Day. Go get tested and know your status!

New Patron Rex! If you want to be as fearsome as Rex check out all the great stuff over at http://patreon.com/w4w

Big love from Australia. Keep it up. Ps. Timothy

Email We received an email from a listener, Chayne:

I freaking love you guys. I listen to you guys on my way from work every Friday and always look forward to it. Keep doing what you’re doing because it works. My state got mentioned last week, good ole ass-backwards Tennessee, where people fly the American and Confederate flag side by side because these bastards are too stupid to see the irony. And speaking of Tennessee, if you guys ever get a beer from Yee-Haw Brewery don’t even waste time trying it, pretty sure you could strip paint with it.

Also, Shane, your mom got that spelling because of all the wonderful drugs that go into childbirth now ;)

This week’s roundtable was a bit short! But you can help fix that by giving us an iTunes review, becoming a patron at http://patreon.com/w4w or by contacting the show through all the usual socials linked in the show notes!

We do want to mention that we still have shirts, hoodies, and other great schwag on our store at interestingiftrue.com with more great stuff on the way! So make sure you check that out. We’re also getting ready to record another episode of 4 More Beers for the upcoming weeks so this is a great time to join our Beer Club and have your reviews read on the air. Speaking of the Beer Club, some of you aren’t listed on our website’s Friends of the Show page — remember, that’s an opt-in only honor so if you want to see your smiling face (or avatar) on interestingiftrue.com let us know!

Finally, Jim has joined us again and what better way to say thank you than checking out WyoAIDS.org!

Jim, what have you been up to?

After this great drinking birthday weekend, I’m glad I can recover with Gwyneth Paltrow. http://bit.ly/2tvkLLc

Once again an upstanding pastor, evangelist, television host, author, humanitarian, philanthropist, a businessman is being dragged through the mud! http://n.pr/2tvMMSN?

Prayer, Avionics and things you don’t want to hear a pilot say… http://bit.ly/2tveyyM

For about the past three years, a bunch of billboards around Sioux Falls that speak out in a way that we rarely see in this country. They espouse that the reader thinks, and think about topics that we as skeptics and freethinkers can appreciate. The billboard campaign sends readers to several different websites,

Messages such as Sioux Falls Feminists Domestic Abuse Looks Like This! You NEVER deserve Domestic Abuse! You Are Not Alone! Help’s at SiouxFallsFeminist.com. (with a picture of a child or woman, cowering in a corner)

Without God! 98 Million Americans Are Living Happily Without Religion! Being A Good Person Does Not Require A God! Join Us! SiouxFallsAtheists.com

Evolution Is A Fact! The Earth Is Over 4 Billion Years Old! Those Who Think It Is Only 6,000 Years Old Are Still In The Dark Ages! SiouxFallsScientists.com

The man behind this campaign is a 73-year-old retiree named Dale Hemming. Hemming spent a career working for Graco, Inc. where he patented five inventions, and during his time at Graco, he always held onto his stock each time it split. By the time he retired, he had accumulated some wealth and now he’s spending his money to educate people about the topics he believes in.

According to an interview on unitedcor.org – United Coalition of Reason’s website: http://bit.ly/2tvpwV6

Hemming became an atheist in 1965, “when I was 21 in college when I read the works of Ayn Rand, which convinced me there was no God even though I rejected the rest of her philosophy.”

“I became a feminist in 1960 in junior high school, arguing against the sexual double standard (boys were supposed to have sex with any girl they could, and “good” girls were never supposed to have sex before marriage, only “bad” girls did), which made me unpopular with both the boys and the girls at that time.”

While volunteering at Women’s Advocates in St. Paul starting in 2002, he saw first hand the damage caused by domestic violence and child abuse.

While not formally partnered with any major interest groups similar to his own, he sees his campaign as a way to keep busy and use his money in a positive way vs buying cars or vacations. He has no children to support and twice divorced and no other close family, so this is his way of reaching out and spending his retirement time.

He drives a compact that could belong to any college student in the city, were it not for the car-top sign announcing that “Child sex abuse is never your fault” and offering help at his Sioux Falls Feminists website.

“I’ve got nothing else to do with my time, I might as well try and educate people,” Hemming said.

What do you deserve to die for? – http://bit.ly/2tvwfyq

The generic word God is used for all deity names, and names of places or people have been replaced with generic terms. How well do you know your Torah, Bible, or Quran and Hadith? Can you tell which is which? Give it a try and then check the key at the bottom.

From fan, twitterer, and all around awesome person @CraigDeFarmer