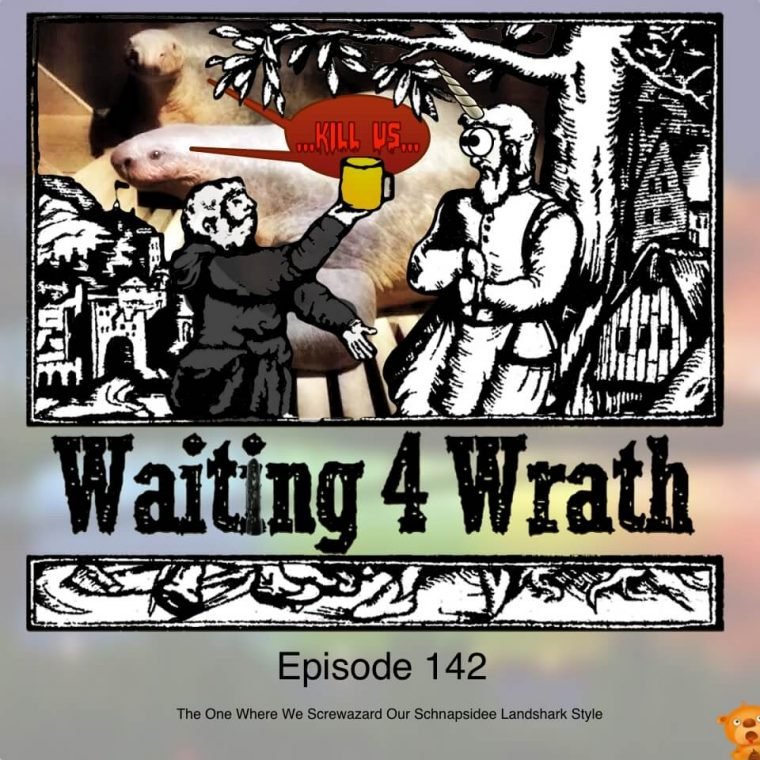 Episode 142 – The One Where We Screwazard Our Schnapsidee Landshark Style

In this week’s show, episode 142, we’ll quiz bears about how they teach their breasts to be so full… and buoyant.

Now, grab a beer and help us test the god hypothesis — because, while Guan Yu (Chinese god of loyalty, righteousness, and valor) hasn’t struck us down yet, we are trying his patience!

This week I taught myself a new exercise it’s a cross between a lunge and a crunch, I call it lunch.

Did you know that 2yrs after the death of King Henry the VIII the first Book of Common Prayer was printed? After several iterations (and quite a bit of religious controversy and violence; its author was put to death over it) the final version remains to this day the official liturgy of the Church of England.

Listen, enjoy, and then support this podcast
From Odysseus2k7 from the United States

Wonderful comedy and honest beer reviews. If you are a fan of No Religion Required, add this podcast to your download queue. After gaining an appreciation for this wonderful show, support it on Patreon.

We got a mention from Ballast Point Brewing… so that’s kinda cool.

And The legend of Angry Gay Face continues to grow as we got a txt message from Mr. Bearpig!

Hey guys Mr. Bearpig here. In the middle of my Friday tradition beer, tractor, and your show. And Jenn you are my favorite too!!! Oh and just some background on the, “not gay if you make a mean face.” I worked in a prison for 9 years, an inmate told me that once after I found him blowing another inmate in the library, anyway love you guys

Angry Gay Face – the hero cell block C needs, not the one it deserves…

It deserves a hero without teeth or a gag reflex. Yeah… that’s the one.

Quickly this week I’d like to mention a few updates we tripped over. You may recall in Episode 85, been a while, we talked about those asshat parents who “gifted” their six underage daughters to a man who claimed to be “prophet of God.” Lee Kaplan, 51, was found guilty of 17 charges including child rape, statutory sexual assault, and indecent assault. He is still awaiting sentencing. As for the parents, Savilla pleaded guilty and Daniel pleaded no contest. Their sentences are the maximum allowed by law – up to seven years in prison…

Never! But they do shit in living rooms. Find out where at Patreon.com/w4w!

Despite “taking back the rainbow” from the LGBTQ community and bathing the big boat in multi-colored night lights, the Ark Park is having some serious financial troubles. The Kentucky Tourism Arts and Heritage Cabinet has suspended an incentive agreement worth up to $18 million with a Noah’s Ark-themed attraction in Grant County because the park transferred its main property to a non-profit affiliate.

The July 18 cabinet letter to Ark Encounter attorney James Parsons said the ark park’s recent actions put it in breach of the agreement with the state to refund a portion of sales tax collected at the site, which opened last July with a large-scale replica of Noah’s Ark.

Three days after this suspension, officials at a Noah’s Ark theme park have sold their main parcel back to their for-profit entity Crosswater Canyon, (which is also affiliated with the Creation Museum in Petersburg) for… $10.

Ark Encounter has also been in dispute the city of Williamstown (1 mile away), which issued another tax incentive program. Ark officials are resisting a new safety assessment tax that would add 50 cents to every ticket sold in order to improve emergency services that respond to Ark calls. Lulz…

The small businesses in Williamsburg are also very upset about the total lack of new business that was promised. After Answers in Genesis were given tax breaks and incentives from Kentucky state tourism boards.

Now folks, how could this have possibly failed? This is a theme park that boasts such exciting dining options as Zophar’s Flatbread sandwiches and Shem’s Snack Shack, Home of the Ark Dog — 2/3s of a Cubit of Hot Dog goodness!!

Side note: there is apparently no Ken Ham & Cheese sandwich, which absolutely demonstrates their total lack of imagination. Creativity museum this ain’t.

Don’t forget the gorgeous murals depicting the ‘animal kinds’. Mommy Blogger Kristen was nice enough to share some pics on her web page that I wish to share (from Celebrate With Me Every Day gag): Crazy nice lady

So few kinds becoming so many species. (Sorry small boy.)

Also, this next picture comes with this helpful caption from Mom Kristen:”If you don’t want to read everything at the moment or want to re-read text later, take photos with your phone. There were several signs that I wanted to be able to re-read and remember at a later point. I love the convenience of smart phones.”

Vandyke
Beer Term – To stagger, weave, or wander in the zigzag course of one drunken or irresolute.

Katzenjammer
Beer – The nausea, headache, and debility that often follow dissipation or drunkenness.

Arabian Goggles
Sex Act – When you put your testicles over her eye sockets while getting head, it may be anatomically impossible.

Fish Eye
Sex Act – From behind, you shove both fists in their ass and they turn around in a one-eyed winking motion signaling that they have been there and done that.

Hole In One
Sex Act – The act of sticking your dick in your own ass.

Bitch Slap
Beer – Mixing a 6-pack in the store

The Landshark
Sex Act – The woman braces herself facing a wall, naked, hands against the wall, legs spread, bent over. Next, the guy also naked as well as stiff walks to the opposite end of the room, places his palms together and raises them above his head, and begins chanting the theme to Jaws. The guy then sprints toward her at full speed with his pelvis-out, fin protruding, and you can guess the rest.

Schnapsidee
Beer – German. A daft or ridiculous plan thought up while drunk.

Bayoneting the Wounded
Beer – Finishing the “wounded soldiers” the next morning

From Jerk to Gentleman in two words… http://bit.ly/2w4ycir

Aaron, age 19, and Jamal, 17, are two best friends from Seagoville, Texas who recently became heroes after stumbling upon an unusual scene. The two friends were driving through Kaufman County, Texas– near Dallas– when they noticed a good looking woman in the backseat of a car. They pulled up to her car and instantly felt that something was off. The woman appeared to be mouthing the words, “Help me.” Aaron immediately called 9-1–“I’m on the highway. I’m witnessing a robbery. Not a robbery, a kidnapping.” said Aaron in his 911 call. He explained: “So, we’re checking out the girl in the backseat because we’re like, ‘OK, she’s kind of attractive,’ and then all of a sudden the guy is turned back, looking at us. We looked in the backseat and the blonde female in the back was saying, ‘Help me,’ or something, whispering it.”

It turns out, the 25-year-old woman had been leaving an office party in Downtown Dallas when 37-year-old Charles Atkins Lewis kidnapped her at gunpoint, forcing her into his car and driving off.

Author’s Note: Steve makes a good point. This story isn’t exactly up to our usual Faith In Humanity Restored standards and that’s on me. I was in a rush and saw a headline about two kids saving a lady and basically just glossed over the fact that they only saved her ’cause they were checking her out. But still, it has a happy ending so that’s nice.
If you’d like you suggest a happy story to close the show out on we always love listener suggestions. Send us a link on any of the socials below or to our email, [email protected] 4 Wrath.com.
Thanks,
~ Aaron

The Philosophy Of Kurzgesagt – http://bit.ly/2w4Gabk