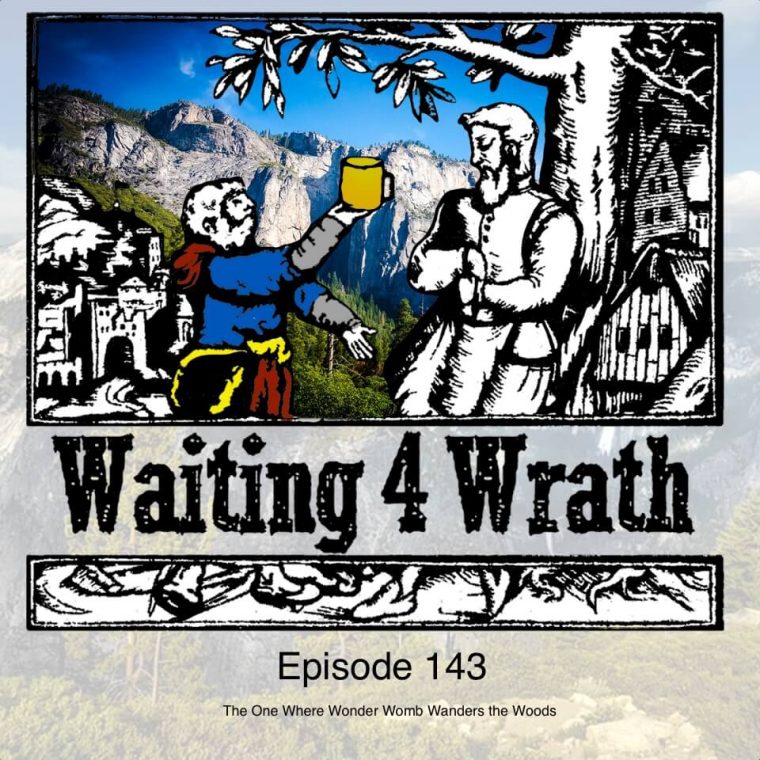 Episode 143 – The One Where Wonder Womb Wanders the Woods

In this week’s show, episode 143, we go to Yellowstone to raise money for Wonder Woman by digging up gay dino-spider bones.

Now, grab a beer and help us test the god hypothesis — because, while Ninlil (Mesopotamian goddess of the air) hasn’t struck us down yet, we are trying her patience!

Shea’s Life Lesson
Today I learned that everyone loves me from all the wonderful birthday messages – now it’s all downhill from here!

Jenn’s Actual Lesson
Did you know that the first known evidence of prophets and prophecies in the Middle East were found in the Euphrates River basin, along the border of modern day Syria and Iraq? Around 75 clay tablets, written in cuneiform and dating to about 1800 BCE, were first uncovered in the 1940’s. However, they were not fully translated and understood until 1988 and were found to represent a religion that followed several deities.

[..] I would like to say is that I have had a very similar raising to Jenn’s. It is exceptionally comforting to know that there are other people who have been raised by crazy Baptists. A point to the crazy Baptists, when I left the church (More of a cult) someone told me I was going to hell for leaving which to 13-year-old me was a bit traumatic. The kicker is that the next week he gave a testimony because his wife had kicked him out for getting drunk every Sunday after church, mind you, he had a gun with him at all times and never wore a seat belt, exactly the sort of human you want to be at your church teaching your small humans. There was a family of 13 where the men only wore jeans and flannels and the girls only wore those odd flowery dresses that the Amish always where. Also, the first pastor (of three I went through at this church) was kicked out for laundering church money.

So on the fifth of lastmonth, the episode of cognitive dissonance featuring this podcast was posted on _youtube. That day I started with episode one of W4W and now 50 days later I have listened to all 141 episodes in their backlog. After a bit of math it would turn out that I spent about 13% of my life listening to this podcast at work, so yes this is a good show, I only wish there was more. P.S. Shea is my spirit animal and I do play this on an open speaker at work. (I work a bit solitarily on a farm so it is all good)

This show is, in turns, hilarious, serious, and drunktabulous! This is literally the only show, at this time, that I donate money to. The patron cuts are far longer, plus you get the 4 More Beers show. #itsgoodtobeapatron. The show is so good that I have canonized all of the hosts as Saints, in my capacity as the Napkin Pope. Listen to this show; you will love it!

The Pope also left us a voicemail! Patrons will get the joke #itsgoodtobeapatron And if you want in on the humor, visit patreon.com/w4w!

Thanks to TBoogs for an update from Shea’s Sex v/s Beer quiz and all the things we get wrong: Katzenjammer, pronounced Katzen-Yammer, translates into “cat whimper” or “moan.” Basically cat yammering. Also, Schnapsidee is pronounced Schnaps-ee-day.

Next week will feature special guest Thomas Westbrook, YouTube host most known in our community for the channel Holy Koolaid.

Speaking of other shows, Problem Addict with Mr. BiblePants will be airing their inaugural episode August 13th at 6:30 Eastern Standard and the fabulous Jenn will be their first guest! So if you want to speak to Jenn live on the intertubes check them out! Again, that’s the 13th at 6:30 eastern on YouTube Live – ProblemAddictPod.blogspot.com

“The movie is amazing,” Engle said. “My dream was that only women can break certain kinds of principalities and powers. I think sometimes Hollywood prophecies better than the church does.”
– It turns out Jenn and the 700 club have something in common…

“I would caution anybody to allow their children anymore to go to these camps, I really would, because so many times we’ve seen that this is where there are predators there to prey on our children,” Smith said.

“any time there is any kind of same-sex environment—I do not mean same-sex homosexuality, I mean boys together doing things together, girls together—it attracts the people that would take advantage of them, and then it will be someone of the same sex, so access is what these people want.”

“They want access to youth and access even to corruption. It might not be sexual, but it might just be a moral corruption of some kind, their older peers who also are corrupted already. You know, so many kids are into pornography and homosexual pornography is part of that. You know, kids are sexualized early only online, you don’t even have to have somebody involved in it. So those may be the people that your kids are in a sleepover with or at camp with, you know, is these kids who are already highly sexualized and nobody may know it, but it’ll come out in the middle of the night.”

Waiting 4 Wrath Presents
How To Not Die of Nature!
With Ranger Jenn

Summer may be starting to wind down, but that doesn’t mean we don’t still have some time left to enjoy it! And what’s more American than a trip to one of our many beautiful National Parks? How about dying in an especially gruesome fashion?

Murder, Mayhem & Morons: Ways to Die in Our National Parks

Welcome to the Grand Canyon!

Home of a big ass hole full of this that will murder like it’s 1349, the foremost research institution of Thelma & Louise Syndrome, and Eric — Adventurer and badass extraordinaire!

What if we told you we’ve completely redesigned how serial murders travel the world? Since our last version of Jenn Murder’s Everyone we’ve gone back to the drawing board to completely redesign ridiculous unsolved murders. And now, we’re proud to present the most advanced serial murderer humor available outside of True Crime Obsessed; The Ahwahnee!

And finally, the local favorite, Yellowstone!

In Lou of creative writing or silly puns … or the attempt of those things anyway, the Waiting 4 Wrath crew would simply like to remind you all to keep your pets on lease when visiting our beautiful national parks! Regardless of how well you think you’ve trained them ever creature, dog and man alike, usually forget even the simplest of commands when running from bears … or you know, being on fire.