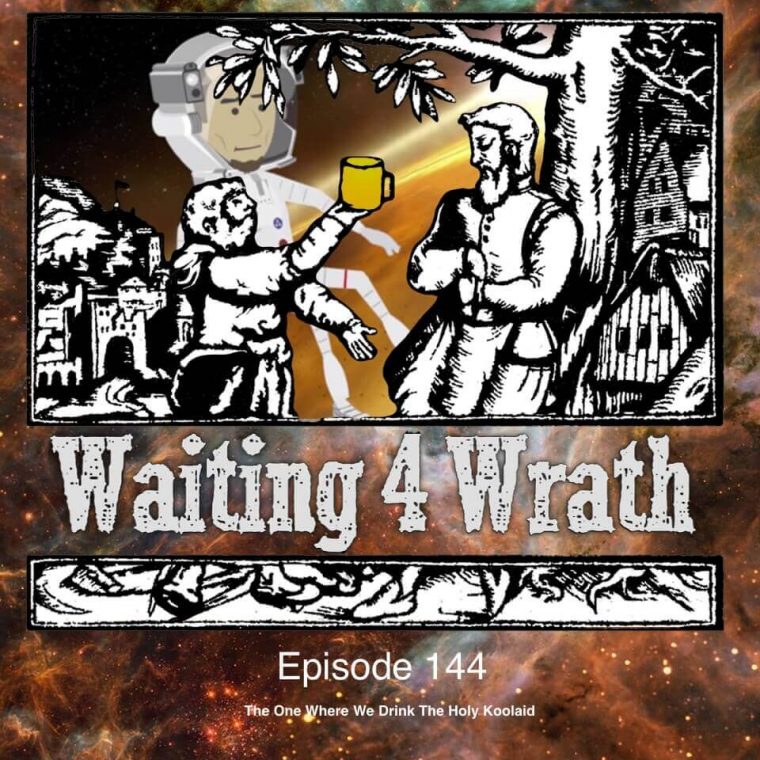 Episode 144 – The One Where We Drink The Holy Koolaid

In this week’s show, episode 144, the Catholic church blames a bipolar woman’s drinking the Holy Koolaid, then orating for Satan, on her poverty.

Now, grab a beer and help us test the god hypothesis — because, while Senx (the creator and spirit of the sun of the Bella Coola tribe)hasn’t struck us down yet, we are trying his patience!

Did you know that the Bella Coola tribe is a First Nations indigenous people from the province of British Columbia? Their home in the afterlife is called the Home of the Sun and is the gateway to ‘Afraid of Nothing’, their Mother Goddess.

Funny podcast that talks about my two favorite things, beer, and atheism. The crew is funny and it feels like hanging out with your friends at a local pub. Look forward to it every week.

Joey contacted the show with some good news! Turns out the “Don’t Be Mean To People Ale” is going to be made again this year and, perhaps, years to come!

Next week Jenn will be the first guest on the new show, Problem Addict, brought to you by Daniel Duncan and Big Bang Betty McGee! Find out more about that at

A quick note from Daniel.

The first 2 pre-recorded episodes are available to the public, for free, at Patreon.com/ProblemAddict

They’ll be launching on iTunes and Speaker after the live show next week.

Find out what Jenn left behind at Patreon.com/W4W right now!

A Wisconsin company (Three Squares Market—a fiendish name if there ever was one) has developed a tiny microchip to be implanted in the wrists of its employees, acting both as an entry key, computer login and vending payment, is frightening credulous Evangelicals with thoughts of Marks of the Beast and Antichrists.

Many of us who were force fed a hysterical diet of end times claptrap have heard of The Mark. Per Left Behind, etc. it’s a Mark employed by the Antichrist (on either the back of the hand or forehead) that is required as a show of loyalty during the years of Tribulation. Not surprisingly, however, generations of feverishly proselytizing Baptists have misinterpreted the Biblical verses they cite and are getting most of their ideas from books and movies.

“Reading the Book of Revelation is complex, said Vlachos, who teaches a class on it. “The first chapter points out that some of it is meant to be taken symbolically.”

But even if a believer interprets the entire text literally, Vlachos said the “mark of the beast” verses specifically mentions two key details.

“Taking the mark goes hand in hand with the conscious decision of publicly pledging one’s allegiance or loyalty to the beast and worshiping his image,” Vlachos said.

The mark is not a random number either. It always names the Antichrist, either numerically or alphabetically.

I’d also like to add that the Book of Revelation has an unknown author who basically spent a lot of time hallucinating on an island. So there’s that.

This isn’t the first time a kerfuffle has started because of Apocalyptic fears in the workplace. A court case out of West Virginia (whose governor proved this week that it may be currently our stupidest state) saw a coal miner win over half a million dollars in a religious discrimination lawsuit.

Beverly R. Butcher Jr., an evangelical Christian and minister, worked for decades in a mine owned by Consol Energy but was forced to retire when the company refused to accommodate his religious objection to its newly implemented biometric hand scanner, court documents say.

The scanner tracked employee attendance and hours worked by assigning a number to an image of a worker’s hand. Citing the Book of Revelation, Butcher feared the could link him to the Antichrist.

As of now, forty employees in Wisconsin have allowed a tattoo artist to embed the rice-sized chip. No word yet on what compensation they will receive for DAMNING THEIR IMMORTAL SOULS.

You can find Thomas and literally fucking everything everywhere! Seriously, I didn’t even have to look for this list…

Thomas mentions another show called “Podunk Polymath,” if you’re curious you can find it here: https://thepodunkpolymath.com

Five Kenyan teens who call themselves “The Restorers” are taking a stand to end female genital mutilation (FGM) with their innovative cell phone app.

The app, known as i-Cut, is a program that allows girls to call for help, seek assistance, and report abuse to reputable law enforcement organizations. When utilized by a user, the app connects her with the legal, medical, and therapeutic counseling and resources required—all at the touch of a button.

For their ingenuity, the Restorers were invited, and became, the only African participants to attend the Technovation Challenge in Silicon Valley, California – a competition for women who are using technology to address problems in their community.

If i-Cut wins the challenge, Technovation—which is sponsored by Google and the UN—will award the team $15,000.

The girls’ own community has denounced the practice of FGM, but since the tradition is deeply embedded in the social structure of many African villages, some Kenyan women are still subjected to the “rite of passage”.

“FGM is a big problem affecting girls worldwide and it is a problem we want to solve,” team member Stacy Owino told the Thomson Reuters Foundation. “This whole experience will change our lives. Whether we win or not, our perspective of the world and the possibilities it has will change for the better.”