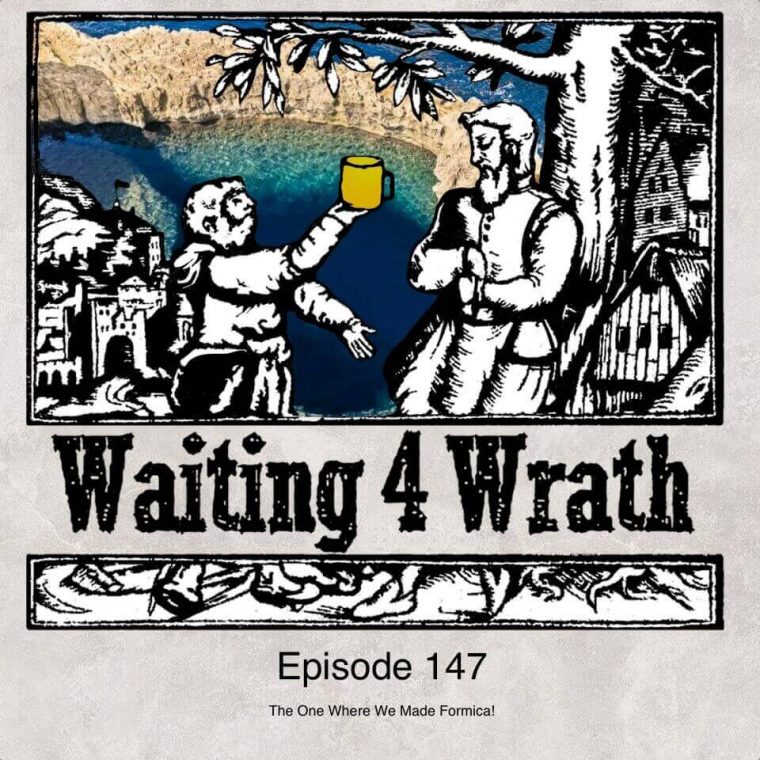 Now, grab a beer and help us test the god hypothesis — because, while Chac (the Mayan god of thunder, lightning and rain ) hasn’t struck us down yet, he has been busy in Texas!

This week I learned that if the human population held hands around the equator a significant portion of them would drown.

Did you know that Chac, the Mayan storm god, is supposedly depicted as a reptile with a scaled body. He also has matted hair, curled fangs, a turned-up nose, and large eyes shedding tears, a symbol of rain.

However, if you look at artistic portrayals, he’s more of an anthropomorphic elephant with tusk issues and dreadlocks.

Great show full of beer knowledge, and humorous views on the news. Give a listen, you’ll like it.

Happy Birthday to Jenn and Big Gay Jim! This remains my favorite podcast. Thanks for everything

E-LEES-abet is the ElizaBEST. Winner of the most awesome patron of the week has sent a big ole parcel of fine beers, straight to us from Ft. Worth, TX.

Speaking of Beers beers you may have noticed some extra ones!

We have the most generous listeners in the entire damn world and you’ve out done yourself. Thank you E-LEE’s-e-Bet (whose name I got right!)! You’ve earned yourself an entire corner of our fridge!

Thanks again
to everyone who goes out of their way to collect unique, favorite or comically chelata’ded…ed beers for us to try! You’re all amazing and we’re forever in your debt!

Finally, we have some housekeeping to take care of.

Podbean is a giant asshole so we’re moving away from them. We’re going to be doing what I should have done from the get-go and host everything myself. I’m going to be doing the transfer a few days as of this episode’s release.

Ideally, no one will notice anything change… well, you’ll get fewer random downloads of old episodes, so that’s nice. I’ll continue to post the show in the old feed for a week or two just in case, those episodes will contain a small preamble letting you know you’re getting the Podbean episode.

But again, if everything goes as planned you’ll not see anything strange or different.

Quick preface, listeners: While we at W4W pride ourselves on not devoting air time to the White House-residing travesty that doesn’t have the self-awareness nature gave a yam, this story does reference him and refers to him tangentially. Because as much as it pains me, like cancer, ignoring him will not make him go away, and the subject of this story is literally one fork-in-a-plugged-in-toaster away from being president (because who knows WHAT THE ACTUAL FUCK is going to happen when/if El Presidente Loco encounters a kitchen appliance…)

So while we are all being distracted by legitimately awful things like white supremacists & Nazi’s being normalized, the recent pardoning of racist-level-15 Sheriff Arpaio, and ridiculousness such as Loser in Chief staring atan eclipse without appropriate eyewear and Tweeting “Good luck” to Texas as Hurricane Harvey was bearing down, Mike Pence has been quietly moving a terrifying agenda forward.

The points I discuss are from upworthy.com

Things Mike Pence has been up to and why it matters:

1. In January, Pence and others lobbied Trump to take hard-line positions on abortion, making good on some of his anti-choice campaign pledges. This has included the reinstatement of the ‘Mexico Policy’ which forbids the US from giving foreign aid to groups that offer abortion services. He also spoke at this year’s annual March For Life in DC.

This is should come as no surprise to anyone following Pence’s career. Remember Periods for Pence? When he tried to criminalize miscarriages?

2. He’s been very vocal about supporting the use of tax dollars to fund religious schools.

Pence happened to the first VP to cast a tie-breaker to confirm the appointment of Betsy DeVos. Remember her? The billionaireheiress who had zero education-related qualifications to run the department, but she did have a history of donating to far-right causes and championing the use of public money to fund schools that would “advance God’s Kingdom”

Pence himself has long vocalized support for tax supported charter and religious schools. In fact, under his time as gov. Indiana saw quite the uptick in the number of public schools teaching creationism.

And since POTUS has absolutely no fucking clue about anything pertaining to education, we just need to come to terms that Pence is the engineer of this train.

3. Pence actually has been the deciding factor several times so far, including casting the tie-breaking vote to nullify an Obama-era rule allowing that Title X funds be used for family planning services.

(In case you are curious, Joe Biden never cast a single tie-breaking vote his entire 8yrs as VP.) Considering how he was championing the dissolution of Planned Parenthood, no one should be surprised. And obviously gutting the Title X rule is bad news, especially for low- and middle-income women across the country.

4. Did I mention poor people? Well, fuck them because Pence has championed efforts to roll back Dodd-Frank consumer protections.

What exactly does this mean? Remember when we had a financial collapse resulting in billions in bailouts and the loss of EVERYTHING for millions of workers? The legislation that went into effect to help prevent that sort economic devastation again is exactly what Pence swore to overturn at GOP retreat (vomit) this year, due to “overbearing mandates”. In May, he spoke out in favor of Republican Rep. Hensarling’s (Texas) CHOICE Act, which would deregulate the financial markets once again.

5. Adding to number 2, lest we forget he is a theocrat and zealot, here are few more items demonstrating his evangelical tendencies. He was an outspoken proponent of the “religious liberty” executive order and POTUS VOMITUS creating a National Day of Prayer.

Also, Pence addressed the first-ever World Summit in Defense of Persecuted Christians on May 11. This humiliating performance attempted to make the case that Christians are the true victims of terrorism in the Middle East. Much like Fox News spends the holiday season every year declaring a WAR ON CHRISTMAS.

Finally, on June 23rd he spoke to (anti-LGBTQ mega-churchy shit-show) Focus on the Family to reaffirm the administration’s commitment to helping “persecuted people of faith” and protecting their right to discriminate against LGBTQ people under the guise of “religious liberty”. Per Pence: “This president believesthat no American, no American should have to violate their conscience to fully participate in American life, and he has taken action to protect the expressions of faith by men and women across this nation.”

6. Did you know that in June he was put in charge of the nation’s space program? For a man who pushed for creationism in school and once claimed that “smoking doesn’t kill,” this is an odd choice. At least he has accepted that humans do have an effect on climate. That’s a win, right?

7. Finally, something that we are watching develop right now: Pence has been pressuring Congress for some time to implement anti-transgender policies in the military.

As I’m sure most of us have seen, Trump is banning transgender soldiers from all aspects of the military. It was his VP who started this ball rolling, and has been lobbying hard for months to fight back against trans inclusion in the military. Pence was reportedly putting pressure on members of Congress to hold the 2018 defense authorization bill hostage unless it included a rider barring funds being used for transition-related health care.

One bright note, the Department of Defense is holding off on implementing the tweeted policy until his Grand Orangeness formally submits a plan. However, considering this a pet project from the much more task-oriented and actually literate VP, it’s being considered nearly a done deal.

Fuck you, bigots… in Danish… or Denmarkian… or whatever T’Boogs is gonna give me shit for not saying… http://bit.ly/2etvqju

Anyway, they’re having a bit of a party up there in Gesten, a small city of 900 in the Vejen municipality of South Jutland.

Apparently, a local city councilor and member of the Danish People’s Party ( which is a right-wing shit box of people, largely evangelical Lutheran the group is anti-immigration, monarchists, work against multiculturalism but oddly, approve of social welfare nets and education… even Scandinavia’s alt-right is more progressive than our mainstream GOP… ugh), one Annie Grimm, wrote a letter that said, among other things said:

“Devil’s be homosexuals, lesbians and other minorities”

I assume the obligatory “ARRRRRRR Matey” was left out for editorial reasons.

And, like the locals, we’ll just cut her off there and continue the conversation on the main street, where, inspired by Copenhagen’s pride festival the locals tossed together Gesten Pride.

Nick Højgaard, chairman of the organizational group, says that Gesten Pride is being held as a reaction

Blade of the Immortal – http://bit.ly/2etsJ1k