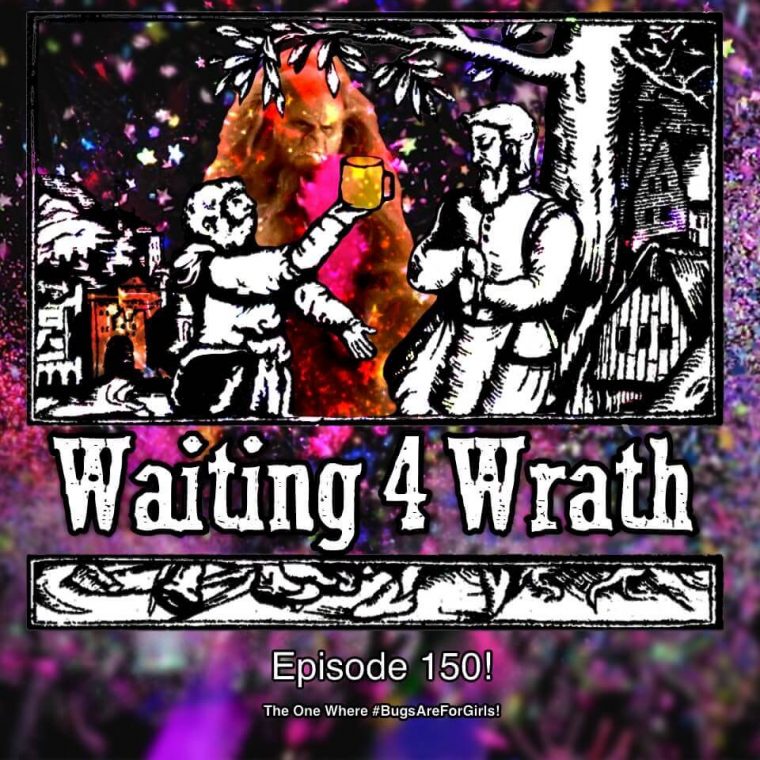 Episode 150 – The One Where #BugsAreForGirls!

Now, grab a beer and help us test the god hypothesis — because, while Sekhmet, the Egyptian Goddess of divine retribution, vengeance, conquest and menstruation hasn’t struck us down, we are trying her patience.

This week I met a girl with one leg who works at a brewery, she was in charge of the hops.

I’m Jenn and if anyone was curious, we are celebrating our Sesquicentennial episode! Also, I’ve decided goddess Sekhmet is my girl.

A group of good friends reveling in their digressions. Love the Good Gay News, The Goddamn Headlines and the beer reviews. Can Big Gay Jim be my spirit animal? I’d like that.

Thanks to Heeby-Jeebus for our newest delivered 6-er!

150 Is Our Last Show If This Headline Is Right…

W4W’s Current Adventures in the PAST!

Alright kids, 150 is the number of today’s show, AND it’s apparently magic so let’s get together and explore what that may mean by…TRAVELING 150 YRS INTO THE PAAAAAST!

That’s right! We’re hitting the road through space and time. Please don’t ask questions or think about this too hard.

So welcome aboard the VW4W Magically Wrathful Bus. We’re like Cheech & Chong but with beer! We didn’t ask your parents for permission and we make no promises that this shit is at all historically accurate.

Or that you will survive.

NOW, with that out of the way, let’s set our sights and instruments to 1867…

Well, shit, this was a bumpy, angry ride and almost immediately we lost air conditioning. I am suddenly wearing a dress with stockings and fucking petticoats. I immediately hate this…but in the interest of historicity and episode length, we must carry on. Also thank Athena, prohibition hasn’t happened yet.

Alright fellas, here we are, watching 1867 flying past us in a collage of backwards beliefs, glimmers of hope and a TOTAL lack of antiperspirant.

So guys, any idea of what we may be seeing on this journey through 1867?

Oh shit, and here we are right out of the gate, in the midst of some shit. According to our instruments it’s January 8th

Standing in muddy roads of our national capital we see African American men gathered, as they are the first to be granted the right to vote in D.C. This is happening despite the veto of the current president

Andrew Johnson – Andy Penis Face for those in the know.

Don’t get comfy, the VW4W magic alarm is going off!

Teenagers in our 21st century days feel they have a helluva time, but Prince Mutsuhito, 14, has just become the Emperor Meiji of Japan. No word on his sense of existential angst. However Westerners have only recently been allowed extremely limited access to Japan thanks to Bakmatsu, the final years of the Edo period when the Tokugawa Shogunate ended. Between 1853 and 1867 Japan ended its isolationist foreign policy… However things are still very feudal, so someone get Shea and Steve to the bus without comment. NOW.

And now, back to ‘Merica.

Oh ok, cool, this actually works out. We’re in the final frontier, the land of the midnight sun, and nearly 100 years before the most attractive Captain Planet villain Sarah Palin is born.

Ok, that’s great and all but I’m aggressively steering this vehicle more southward because these fucking stockings are NOT insulated … and …. now … we find ourselves in…goddamnit, Alabama.

Who do I need to blow for motherfuckin’ Google Maps???!!!

Steve and Shea were quick to offer, but if you really need those sweet, sweet directions right now it’s Danish brothers Lars and Jens Rasmussen who’ll really need the attention. The brothers created the software that would be acquired and rebranded as Maps by Google in 2004.

Oh wait, this is actually pretty amazing. Did you guys know that this date is the first time African-Americans were allowed to vote in a municipal election?

I guess that’s why we are in Tuscumbia, AL.

Also, dear goddess I would murder for bar a of Secret.

Ok, all back aboard the Wrathful VW4W Bus for our next adventure…in jolly ole England!

Eh, that was a shit-lump of a stop, however, I did get to spin some sweet donuts in the lawn of the British Parliament as they had just dismissed John Stuart Mills’ proposal to grant women’s suffrage in Britain.

Let’s flash some skin!! Because those living corpses in Parliament need it!

Ok, see the young dude though the windows?

Smug and arrogant looking? Just watch…for a just bit….YES!! Did you see that??

Mr. Imma-Steal-Tesla’s-Ideas was working with a lead-acid battery when he spilled sulfuric acid onto the floor. It ran between the floorboards and onto his boss’s desk below.

And that is how 19-year old Thomas Edison was fired… out of a canon… into the sun.

Back in the bus, I think the fumes are getting to us!

Ok, Aaron, what are you doing? WHY ARE YOU PUSH…..well, dammit?

Oh for the love of the fuck, where are we?

Toronto becomes the capital of the Ontario. And the boys eat fried potatoes and gravy. Everyone is polite and hurray. Trudeau isn’t even close to being born.

AND I’m still in fucking stockings.

Gosh, you guys, Sweden is really lovely. Even the sheep seem to shit out of the way of our path.

But…. Does anybody smell something…weird? Like burning… bad stuff?

Alfred Nobel is experimenting with his soon to be patented Dynamite! Get to the bus!

The holidays should be making things more joyful…and can I GET THE FUCK out of these inhuman stockings?!!

Anybody know where we are or what day it is?

Steve: It seems to be Dec 18th

Shea: Wicked! We can get home by Santy Clausy time!! My wife make me cookies and snuggles!

Well…I hate to tell you guys but we’re currently awaiting what will be known as the ‘Angola Horror’. It’s a train consisting of four baggage cars, one-second class car and three first-class cars that ran into poorly designed railway structure at dangerously high speeds and cost 50 fifty people their lives. The people in the last car…well, they plunged 40 feet into an icy gorge, landing at a 45-degree angle, with the passengers all thrown together at the bottom. The stove from the other end of the car fell upon them and released hot coals. The carriage immediately caught fire, the fuel from the kerosene lamps fueling the flames, so… yeah, rough night.

Anyway, I vote we turned this Magic Wrathful VW4W around and enjoy our 150th episode in our relatively safe and kinda gross studio. Plus I’m wearing shorts there.

Patreons With A Eh

For this 150th episode special, I’m going to try to go full Skeptics with a K, for a segment I’m calling Skeptics with an “eh” … because I don’t have a real name for it yet, I’m Canadian, I’m not where near an expert at this or anything else so take it all with a health “eh” … and that rhymes.

Check it out now at http://patreon.com/w4w

Let’s do another beer!

8-Year-Old Bullied For Her Love of Bugs Just Got Her First Scientific Publication – http://bit.ly/2ygSuWS