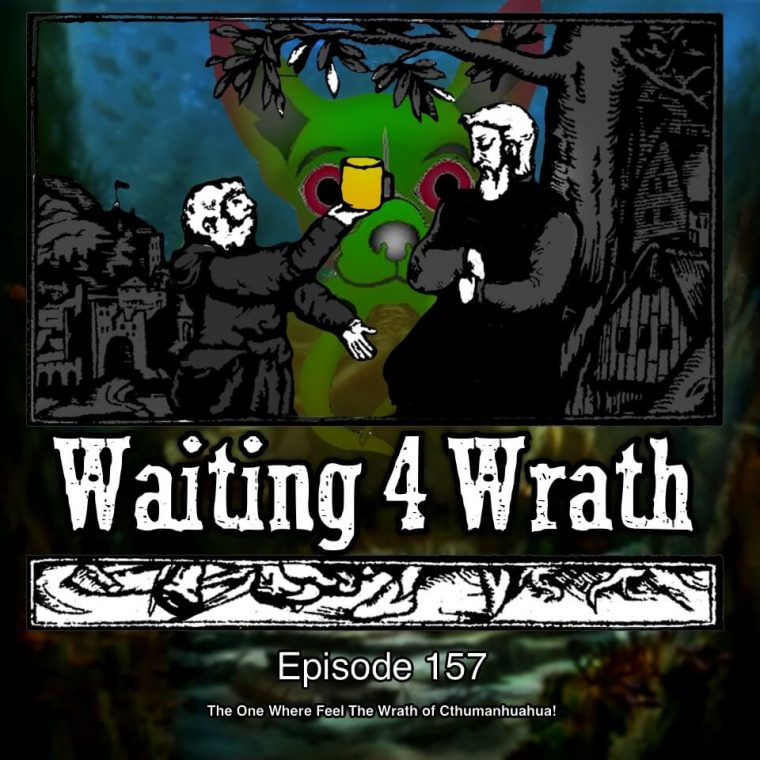 Episode 157 – The One Where Feel The Wrath of Cthumanhuahua!

In This Week’s Show, episode 157, we flashback to yester… month… for the Texas vs. Kenya: Lost Time Challenge!

Now, grab a beer and help us test the god hypothesis — because, while your own personal Nksis eN-key-sis (Santerian elemental spirit) hasn’t struck us down yet, we are trying its patience!

Nothing makes you feel like a bigger alcoholic than taking out the recycling.

Did you know that Palo Monte and Mayombe are earth-centered and element-centered religions that recognize a Supreme Being? Palo in Spanish means ‘stick’ or ‘wood’, and Palo is said to connect the healing properties of woods, trees, and plants. Ideally, it connects one to the reverence for trees and plants.

Yes, we did make a “santeria” vs. “sangria” joke.
I do actually know the difference.
It was a joke.
That’s what we do here.
Jokes.
~ A

We got a package!

This show combines four wonderful hosts with beer and skepticism, and despite the fact that I myself don’t drink, still manages to be one of my absolute favorite podcasts. I spend every week waiting for Friday so that I can listen to the new episode. Also, Shea is most definitely my spirit animal.

Get buzzed and talk about religion and not-religion. What could be better?

Thanks to Morton on Twitter for helping us to create and put a face on a new god, Cthumanhuahua, patron of god of evil scientific progress.

HL3 – Canadian Gov. General of Sit Your Ass Down – http://bit.ly/2jfJOxT

The Augsburg-based company employs 6,400 people, has an annual turnover of 1.7 billion euros, and an online business in Germany second only to Amazon.

Weltbild is also Germany’s leading bookseller, controlling 20% of the domestic bookstore market. Profits are regularly reinvested in the company with an eye to rapidly increase the market share – an increase that is only possible if Weltbild continues to sell materials that are not compatible with the teachings of the Church.

The Church also owns a 50% share in publishing company Droemer Knaur which produces pornographic books, and so indirectly is also a publisher of pornographic material, titles including:

Because the world of real news is terrible and full of misery, I’m going back to Halloween and the Christian Broadcasting Network’s website for this week’s story. So be aware, click the link at your own intellectual peril.

CBN held a Facebook poll that showed only 13% of believers feel that Christians should/can celebrate Halloween. (They have 811K followers on FB, I tried to scroll far enough to find the poll, but my brain started to bleed, so I’m not sure of the participation numbers.) So there’s not a clear consensus, but for the most part Fundies are lame on this, too.

But for the poor misled 13%, here enters John Ramirez. He is a former Satanist and is making the talk show rounds, ala 1989 Sally Jesse Raphael at the height of the Satanic Panic. He showed up on Prayer Link to spread the terrifying news with CBN viewers.

John Ramirez tells his true life story of how he was trained to be a satanic cult (Santeria and Spiritualist) high ranking priest in New York City—casting powerful witchcraft spells and controlling entire regions. Raised in an impoverished ghetto neighborhood, he grew up despising his father for his careless disregard of his family. John learned to survive the cold, harsh streets of the South Bronx. Looking for love and validation, he eventually found it in a new “family” of witches and warlocks who groomed him to become a high priest in their occult religion. His plunge into the dark side reached a boiling point on the night he sold his soul to the devil in a diabolical, blood-soaked ritual. With renewed fervor—and the mark of the beast now cut into his right arm—he actively recruited souls into this “unholy kingdom,” haunting the bars and clubs of NYC by night to find his next victims. John’s life continued on this dark path until God intervened through a miraculous, larger-than-life dream, revealing Himself for who He really is and literally snatching John back from the grips of hell.

(Side note: Were I in such a ‘coffee talk’ style of relationship with Satan, I would find some way to get the Amazing Randi’s $1 million.)

Well, shit. That Fall festival may have felt like fun when you were 8, but now you’re Great-great-great nephew and his family will be cursed. what are you to do? I mean, since you are happy with the Trump Administration and don’t believe in Global Warming, you obviously believe society is still going to continue. Well, John has the answer:

Just when you thought you had escaped your high school gym, the devil comes back for you….

So let’s hear from Mr. John Ramirez as he explains the evil ‘ASSES’ that the river demon goddess uses ‘punkins’ for. Or something. And satan is still present in the popping of his ‘Ps’. – Don’t watch this video: http://bit.ly/2hY4kzD

Now this man has 3 published books, (Armed & Dangerous, Out of the Calderon, & Unmasking the Devil) with HUNDREDS of positive reviews on Amazon. And he thinks Santoria is linked to anything involving pumpkins. AND LOOK AT THAT FUCKING COVER!!!!