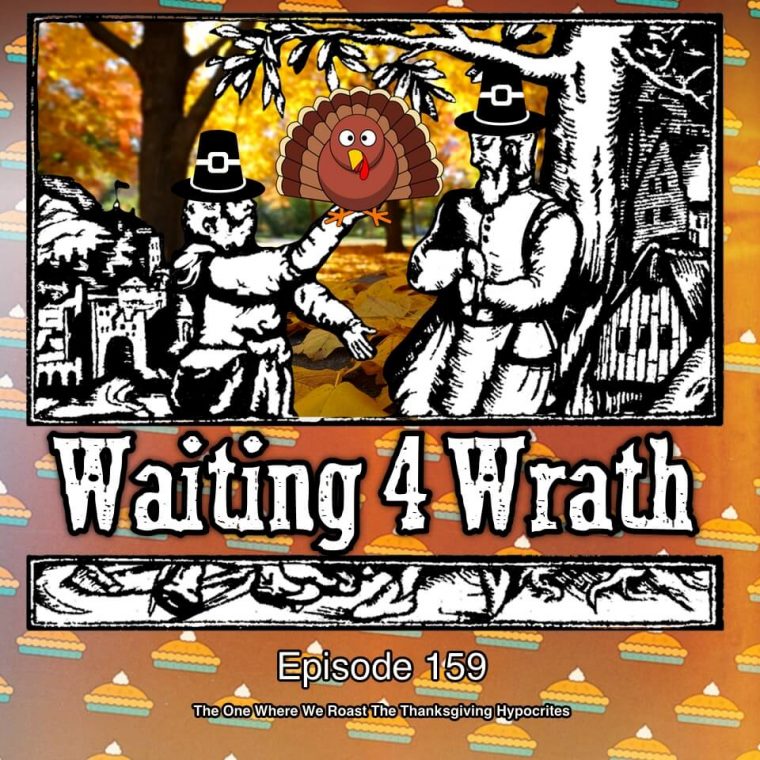 Episode 159 – The One Where We Roast The Thanksgiving Hypocrites

In This Week’s Show, episode 159, Aaron is not here so the crew runs wild!

Now, grab a beer and help us test the god hypothesis — because, while Mbere (creator god of the Bantu people) hasn’t struck us down yet, we are trying his patience!

This week I learned that I’m not a racist. I love all races, except marathons, fuck them!

Did you know that the very first creation of Mbere was a lizard? According to some tellings, he put it in the ocean and after eight days it emerged as a man. So…they sorta got evolution, right?

Australia got almost 80% of their citizens to the Post Office to vote, and 62% said let the gays marry. So the Aussies are having a g’day mate. Who’s surprised? Then you haven’t been paying attention.

Michael… I assume, Bolton. You know, from Office Space… just became a patron!

Heebie Jebus sends a correction to the Beer Review

Love the show!!! One of the top podcasts out there! Great chemistry! Although when Jenn isn’t there, it’s not as good!

Between the beers, the headlines, and the witty banter. Waiting 4 Wrath is an amazing listen

Big Gay Thanks!
– Patron & OG Steve fan Tara needs a thanks for donating to WyoAIDS.org

Make sure you visit WyoAIDS.org to find out how you can help people living with HIV/AIDS in Wyoming. We’re a large state with a small population, so covering things that insurance doesn’t, like travel costs, can make a huge difference in someone’s life. Please, give if you can, and if you like, mention the show in the donation notes and we’ll send you patreon content as a thank you!

Ohio lawmaker Wes Goodman snicker routinely touted his Christian faith and anti-LGBT views has resigned after being caught having sex with a man in his office.

Goodman is married to the woman who is the assistant director of the annual anti-abortion March For Life.

The layers of this delicious irony cake are many and varied:

The 33-year-old had been branded the “conscience of the conservative movement”.

His Twitter biography describes him as “Christian. American. Conservative. Republican. Husband to @Beth1027”, has regularly claimed, “natural marriage” occurs between a man and a woman.

“Healthy, vibrant, thriving, values-driven families are the source of Ohio’s proud history and the key to Ohio’s future greatness,” reads his campaign website which has now been taken offline.

On the flip-side: He exchanged salacious texts and emails with gay men he met on Capitol Hill, and sent sexually suggestive messages to young men he met through conservative circles who were too intimidated to publicly complain, according to three people who knew him when he worked in Washington.

A conservative mole? Operative? said he’d target college kids who wanted to have him as a mentor and were scared to report his sexual advances because they didn’t want to damage their own careers. A former co-worker shared screenshots of messages Goodman sent him that the operative likened to the lewd texts that derailed the congressional career of New York’s Anthony Weiner.

Final note: I would pay real money for those two scandals to crossover for a few salacious Goodman-Weiner headlines.

Praise The Lord And Pass The Ammo – http://wapo.st/2hRpena

In a show of terrified evangelical old white man karma, an 81-yr old Tennessee man brought a gun with him to his First United Methodist Church luncheon for elderly parishioners. During their meal, they decided to discuss gun safety in light of recent mass shootings — an idea that came to them after a neighboring county’s sheriff’s department chose to hold similar seminars at its local churches.

“Well, I’ve got my gun on me,” the unnamed (at the request of his family) man said. He pulled out his holster, which held a .38-caliber Ruger handgun. He removed the magazine, cleared the chamber and showed the gun to the other parishioners. They talked about how to safely bring guns to church — and how sad it was that so many people nationwide had been killed in recent mass shootings.

He then put the magazine back into the gun and put the gun back in the holster, Parks said. Later, while people were cleaning up, a church member who had missed the demonstration asked to see the weapon. (cue suspenseful music)

Just as he was about to show it to the church member, the man accidentally pulled the trigger without realizing the gun was loaded.

A bullet fired across the palm of the 81-year-old’s hand and toward his 80-year-old wife, who was sitting in a wheelchair next to him. It ripped through her lower left abdomen, out the right side of her abdomen, into her right forearm and out the backside of her forearm. The bullet then struck the wall and ricocheted, landing under the wife’s wheelchair.

Panic swept the church. Most people weren’t aware of the second demonstration and — having just discussed mass shootings — assumed an active gunman entered the church.

What came next was a muddle of misinformation. The dispatcher answering the call shortly after 1 p.m. assumed someone had entered the church and was shooting. As a result, the local hospital and several local schools were put on lockdown. It took about 45 minutes for the police and other responders to determine it was all a goofy accident.

Stuart Russell, a leading AI scientist at the University of California in Berkeley, and others will show a film during an event at the United Nations Convention on Conventional Weapons (the what what??) hosted by the Campaign to Stop Killer Robots. (Totally a thing: stopkillerrobots.org What a time to be alive.)

What film is he showing? Terminator? Not quite, but close. A description from the Guardian:

The movie portrays a brutal future. A military firm unveils a tiny drone that hunts and kills with ruthless efficiency. But when the technology falls into the wrong hands, no one is safe. Politicians are cut down in broad daylight. The machines descend on a lecture hall and spot activists, who are swiftly dispatched with an explosive to the head.

The manufacture and use of autonomous weapons, such as drones, tanks, and automated machine guns, would be devastating for human security and freedom, and the window to halt their development is closing fast, Russell warned.

“The technology illustrated in the film is simply an integration of existing capabilities. It is not science fiction. In fact, it is easier to achieve than self-driving cars, which require far higher standards of performance,” Russell said.

The UN shot down a similar bill in 2015 that sought to ban killer robots. Now they are hoping to rectify this situation: according to the Campaign to Stop Killer Robots, a number of nations, including the US, China, Russia, Israel, South Korea, and the United Kingdom are moving toward systems that would give “greater combat autonomy” to machines.

“The UN moves at iceberg pace and actors with vested interests put obstacles in the path at every turn,” Sharkey said. “But the campaign continues to move forward with massive support from the scientific community. We must succeed because the alternatives are too horrifying.”

This past week Kayla Moore posted support from over 50 pastors for he pederast husband.

Pastor Thad Endicott of Heritage Baptist Church in Opelika was angry that his endorsement from before the child-molestation accusations was being recycled to suggest he was standing by Moore after those allegations surfaced:

The Gays Are Possessed! – http://bit.ly/2AkadSm

A gaggle of paranormal researchers says they’ve discovered the root cause of homosexuality. It’s not genetic. It’s not the result of childhood trauma, either. It’s ghosted.

“The main reason behind the gay orientation of some men is that they are possessed by female ghosts,” the article claims. “It is the female ghost in them that is attracted to other men.”

Conversely, the article continues, lesbianism is the result of women who suffer “the presence of male ghosts in them.”

“The ghost’s consciousness overpowers the person’s normal behavior to produce the homosexual attraction,” the article explains. “Spiritual research has shown that the cause for homosexual preferences lie predominantly in the spiritual realm.”

“Due to being possessed by ghosts,” the article says, “the majority of the LGBT population is more susceptible to being influenced by negative energies who give them thoughts to encourage them to display their homosexuality in a shameless and even aggressive manner.”

“Just as we teach children not to play in dirty water or eat mud, we need to educate society what is correct from a spiritual perspective,” researchers conclude. “By failing to do so, we run the risk of a further decline in Righteousness and consequently people in society will become more unhappy.”

Denver has just become the first city outside of California to pass legislation banning the practice of declawing cats.

The bill, which was passed unanimously by the city council on Monday, only applies to elective declawing – conducting the surgery for medical reasons is still legal.

Animal welfare organizations oppose the surgery because it’s a painful procedure that is typically done to save furniture despite many cats displaying physical and mental complications in the years following the operation. Over 20 other countries in the world have already adopted declawing bans because it’s considered animal cruelty.

Some pet owners and projects opposed the bill because they believe that the reasons behind such an act is between an animal caregiver and their veterinarian.

However, studies show that declawed cats have increased chances of being relinquished to shelters – and thus euthanasia – because of behavioral tendencies that follow declawing, such as soiling the carpet and increased aggression. In contrast, some organizations have worried that pet owners would be more likely to relinquish their cats if they were unable to remove the claws for whatever reason.