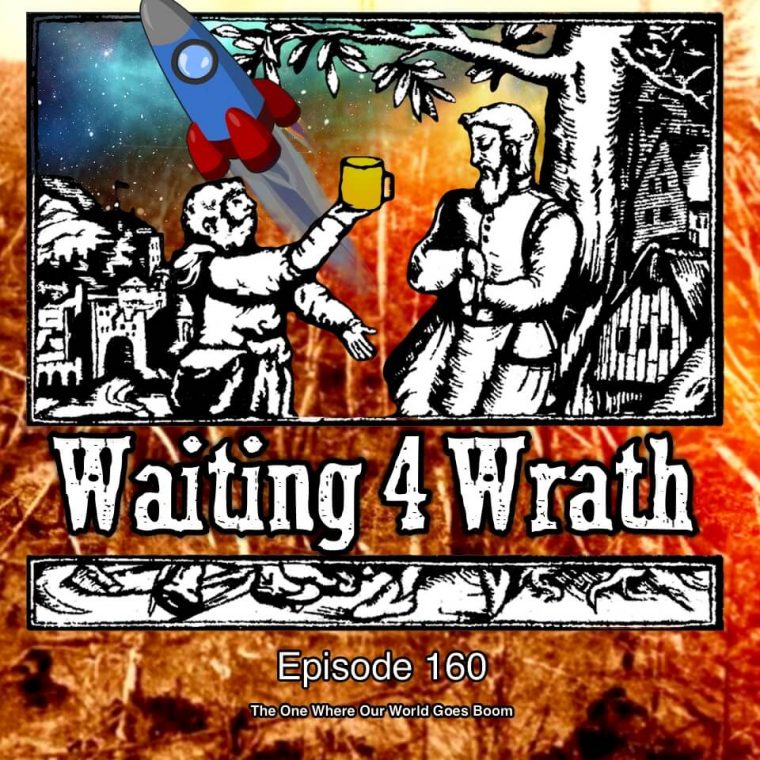 Episode 160 – The One Where Our World Goes Boom

In This Week’s Show, episode 160, we finished our turkey and moved on to the hard stuff, Wild Turkey!

Now, grab a beer and help us test the god hypothesis — because, while Skan (the sky and creator god of the Dakota Native Americans)  hasn’t struck us down yet, we are trying his patience!

Did you know that the Sioux tribe believed humans were formed in the womb of Mother Earth? Well, humans AND buffalo. No word on the other millions of species and where they incubated.

But before we get to all that, let’s have a beer! Turdrunken!

The guys (and the girl) are great, they make me laugh and forget about my mortality and impending death, there’s news, jokes and beer, what else can you ask for?

New Patron – Heeby Jeebus – The one, the only, the awesome

Follow up from 124, Shortey shortens his sentence by pleading guilty. – http://bit.ly/2AeDUDN

We’d previously talked about a hehe ridesharing service in episode 151 that let’s you ride the finest pieces of plastic ass. Unfortunately, the People’s Republic of No Plasti-pussy for you had other ideas. Ther service was cancelled just four days after it’s launch.

Mother Earth is done with our shit – http://bit.ly/2Ae02xW

I think our planet is plotting our destruction. Mysterious loud booms of unknown origins have been recorded in at least 64 locations around the world over the past year. Most recently was this past week, just south of us in Brighton, CO (where Mrs. Yeti hales from) the boom was so loud it shook houses and rattled windows. While some people decided to report their experience on social network sites, particularly Facebook, a few residents decided to call Denver7, the local news to report this strange noise.

“It was just like boom and the trailer shook, and I thought, ‘what the heck was that?’” Ray Armijo, a resident who has also served in the military told Denver7. “It kind of scared me a bit.”

On Nov. 20 a boom in Alabama (now called the ‘Bama Boom’) had panicked locals calling nearby military bases for answers. The Birmingham National Weather Service originally hypothesized that the sound could have come from a supersonic aircraft or a meteor breaking the sound barrier, possibly from the Leonid meteor shower that peaks on November 17 and 18. The U.S. Geological Survey’s Lakeview Retreat near Centreville, Alabama had also picked up a boom sound. Though, seismic data showed that the boom was not the result of an earthquake-related event. Bill Cooke, head of NASA’s Meteoroid Environment Office said that NASA’s meteor scientists would continue to analyse the new data in hopes of discovering the reason for the boom.

But the noises are not solely here in the US. In a report, NASA said that the agency is clueless about the frightening noise sheard from the Middle East, which covers countries like Syria, Egypt, and the State of Palestine to East Midlands. It also involves areas of Australia. Locals in Cairns, Australia, were shaken by a loud rumble on Oct. 10. Then two weeks later, another boom was heard over the Eyre Peninsula in South Australia.

Suggested causes of the noise ranged from supersonic aircrafts to meteors exploding in the atmosphere, whereas some conspiracy theorists even tried to claim it could be the beginning of the end as doomsday approaches. Anytime booming sounds are heard from the sky, it’s worth ruling out a sonic boom caused by aircraft breaking the sound barrier. This might explain a few of the events — for instance, there are reports of a FA-18 Hornet plane flying nearby when the sound was heard in Cairns, Australia — but it’s not a viable theme across all of the events.

Another possibility is that the booms are caused by meteors exploding in the sky. The Leonid Meteor Shower has coincided with the hysteria. This theory would certainly explain why the phenomenon is global, though astronomers have insisted that meteors produced by the Leonids are way too small for this to happen.

Ground explosions also make for a prime suspect, but it’s unclear how a ground disruption could explain the worldwide distribution of the sounds. Many officials now believe that the Colorado clamor was unrelated to the worldwide phenomenon, likely caused by oil and gas extraction.

Indian health minister claims cancer is caused by sins from a past life – https://ind.pn/2A7jvAF
Yeah, this goes about as well for him as it sounds like it should. Listen now at http://patreon.com/w4w

Insook Baik knows what it’s like to go to bed hungry.

She grew up in South Korea during the Korean War, she said, and her family didn’t always have enough to eat.

But things for her are different now.

For about eight years, Baik has bought enough food to serve hundreds of free meals at the store each Thanksgiving Day.

“She’s fallen in love with the community here. It’s one of the few places where people will give their last dollar to each other,” said Baik’s son, Peter, who is visiting from California. “I think that pulls at her heartstrings.”

Baik expected they would serve at least 600 people at the convenience store Thursday afternoon. Last year, she said, they gave out about 620 meals.

The day before, she had picked up turkey for the Thanksgiving Day meals and as she drove with her car full of food, she said, “I cried, ‘Thank you God.’ I was hungry all the time and now I can serve.”