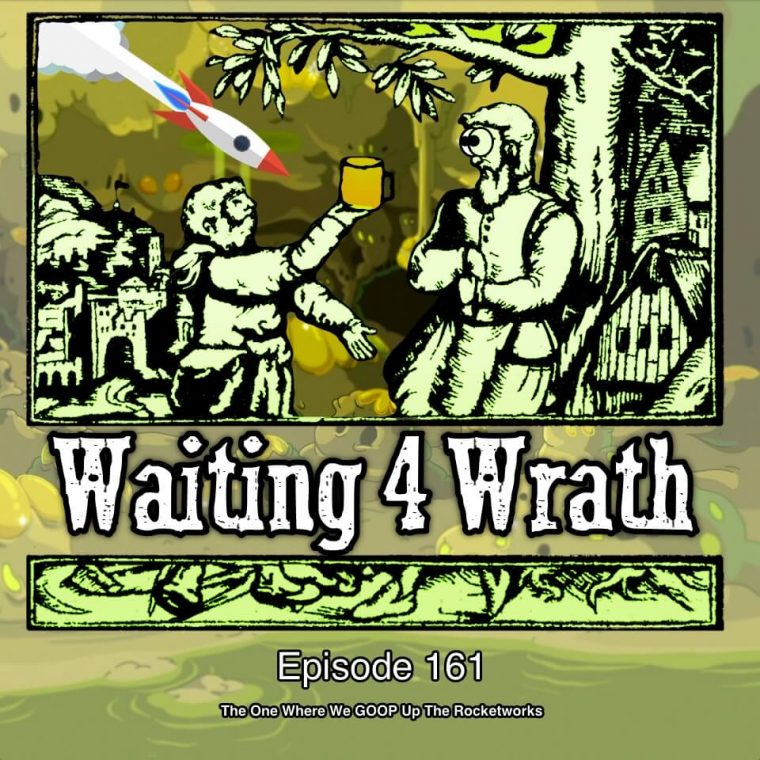 Episode 161 – The One Where Jesus GOOPs Up The Rocketworks

In This Week’s Show, episode 161, we do a lil’dance, make a lil’goop, and get down on a rocket tonight!

Now, grab a beer and help us test the god hypothesis — because, while Frigg (Norse goddess of marriage, motherhood, love and fertility) hasn’t struck us down yet, we are trying her patience!

Today I realized that I hope Elon musk never gets in a scandal because elon-gate would be really drawn out.

Did you know that Frigg, wife of Odin, was thought to know the destiny of all mortals and immortals? But just like a spiteful woman, she refused to share the details until it was too late.

Thanks for the text with the link about the Tunguskan incident…mystery texter.

Big congratulations to listener Leighanne for being the 500th ‘like’ on our FB page! You’re Jenn’s hero.

Some of you may be aware of the recent tragedy in our podcasting community, you’ll find a link in our show notes to the GoFundMe for Scott and Jennifer Smith’s children. If you have a buck to make a donation, send it their way.

Jenn’s Story: Let’s have a get together with all of our stupidest friends!

The GOOP continues its good work by liberating wealthy Stepford wives of their excess finances, all the while shaving off some of that pesky life expectancy.

Next month GOOP will hold its first summit ‘In GOOP Health’ in NYC. Ticket prices range from $650 for ‘Tumeric’ level up to $2,000/ticket for ‘Ginger’, which is tragically sold out. For these low, low prices you’ll be treated to “cutting-edge panels of health-defining doctors and experts, along with a hall of experiential activations, ranging from binaural beats meditation to acupressure and tarot card readings.” Which literally makes no goddamn sense.

One much-promoted guest speaker is “Dr.” Kelly Brogan. Her title is a “holistic health psychiatrist”, which is an alphabet soup amalgam that basically means it’s all in your head. Thankfully, hero of the show Real-Dr. Jen Gunther slaps downs some facts, outlining some of the most egregious beliefs of ding-dong Kelly. Dr. Jen posted a blog this month detailing an essay that “Dr.” Brogan wrote in 2014. She claimed that the notion that HIV causes AIDS is a “meme” brought upon us by the “medical-scientific-industrial marriage,” and that “drug toxicity associated with AIDS treatment may very well be what accounts for the majority of deaths.”

Per Jezebel, and I’m going to quote a full paragraph here of some good writing:

“While I recognize the hypocrisy in using my mind to help unearth truths while proclaiming our fundamental limitations as thinkers, there is an abuse of ideas, and the people who accept them that is resulting in harm and suffering where there might have been something entirely more benign if we just gathered more information,” she writes, failing to mention that the disease was spread (obviously) not because people with HIV are over-treated, but because they are overlooked or shunned, and medically neglected. Dr. Brogan also fails to reckon with the reality that today, Americans who suffer from HIV and AIDS are largely from poor, rural, black Southern communities that need access to antiretroviral therapy to avoid passing HIV to newborns. And, lastly, she fails to acknowledge her precarious, if indefensible position as a white woman suggesting that maybe these vulnerable populations have the luxury to question the doctor offering them life-saving treatment.

In fact, Fake-Dr. Brogan is adamantly opposed to ALL medications. Despite having sorta Dr. training (she cites “training” at NYU Medical Center and Cornell University Medical College and is board certified in psychiatry, psychosomatic medicine, and integrative holistic medicine. Uh huh) she feels any and all ailments (both physical and mental) can be cured by appropriate food and lifestyle. After being diagnosed with postpartum thyroiditis she decided “the medical industry, government, food companies, and the pharmaceutical industry do not have your best health interests at heart.” “So, I searched for an alternative—and I found the gentle, hopeful world of natural self-repair. Two-and-a-half years and one pregnancy later, I was symptom free—and prescription free.”

She also advocates sufferers from mental illness/depression immediately cease all antidepressant medication. Which is never a good idea unless you’re looking for full blown psychosis. She believes that 5 foods are actually the cause of depression. Any guesses as to what they might be? gluten, dairy, GMOs, sugar, artificial sugar, and vegetable oils.

On her website, she offers one-on-one counseling services, in addition to selling her book, A Mind of Your Own, which presents a long form version of the no-medication argument, and an accompanying course called “Vital Mind Reset,” a 44-day distillation of her one-on-one coaching that claims to provide individuals with a “path to drug-free health and happiness.” The complete course costs $997 and comes with, among other things, something called a “Detox Your Mood Coffee Enema.”

Save yourself the pain and don’t go to her blog. It’s stupid and so full of crazy white lady it hurt my soul.

Let’s hear from “Dr.” Brogan directly, from a testimonial post on her blog: “Regarding a trip to India, she writes of a woman who became “immobilized by nausea, diarrhea, and pain,” and her traveling companions insisted she visit the doctor. But Dr. Brogan, per her account, “demanded an opportunity to support her without medication intervention.”

“I knew, in my heart, that if she aligned with her body, she could move through this.”

Eventually, the woman emerges from her sickness. Dr. Brogan writes:

She moaned and cried, vomited, and lost control of her bowels. But within 12 hours, she emerged. We joked that it felt like she had birthed the most beautiful baby and we were all here to ooh and ahh over it.

She demonstrated a woman’s fearless capacity to surrender to a process, and because she did that, it is now easier for every woman on the planet to meet that challenge in the future. This is the morphic resonance of fearlessness.

Contrarily, if she had taken antibiotics, she would have, in my estimation, prolonged and complexified (WHAT?) her illness because the body will never be suppressed. Then when she finally recovered, she would have credited the antibiotics–the emblematic sacrament of the patriarchy–with her life and stability. What a loss therein.”

Finally, what does GOOP have to say about of their most…controversial speaker? In a statement, a Goop representative told Jezebel, “Dr. Brogan is a board-certified psychiatrist, NY Times bestselling author, and has trained at NYU, Cornell, and MIT. She will be speaking about mental health at our summit. We strive to give a platform to doctors who have interesting, varied, and sometimes unconventional perspectives, and Dr. Brogan is just one of more than 20 individuals that will share their ideas with attendees in January.”

I’m sure we’re all familiar with tag?

Running after your friends. Trying to catch them so they can be it…

“It” being an occupant of a Nazi gas chamber of course.

No? That’s not how that’s played?

I think we all know art can play an important role in commemorating atrocities. Visit a holocaust museum or exhibit and you’ll see what I mean. Unfortunately, sometimes artists are assholes — see ¼ of this show, for example. But there’s a fucking limit!

And that limit is playing a game of naked grab-ass inside a Nazi gas chamber at the Stutthof concentration camp.

As marriage equality moves closer to becoming the law of the land in Australia, one speech from Tim Wilson, a 37-year-old lawmaker in the Conservative Coalition Gov. party add his own, very special, two cents.

To comment on a show or suggest a brew visit our web, Twitter or Facebook pages. As always, we’d love to get a good rating on iTunes, Google Play, or Stitcher!