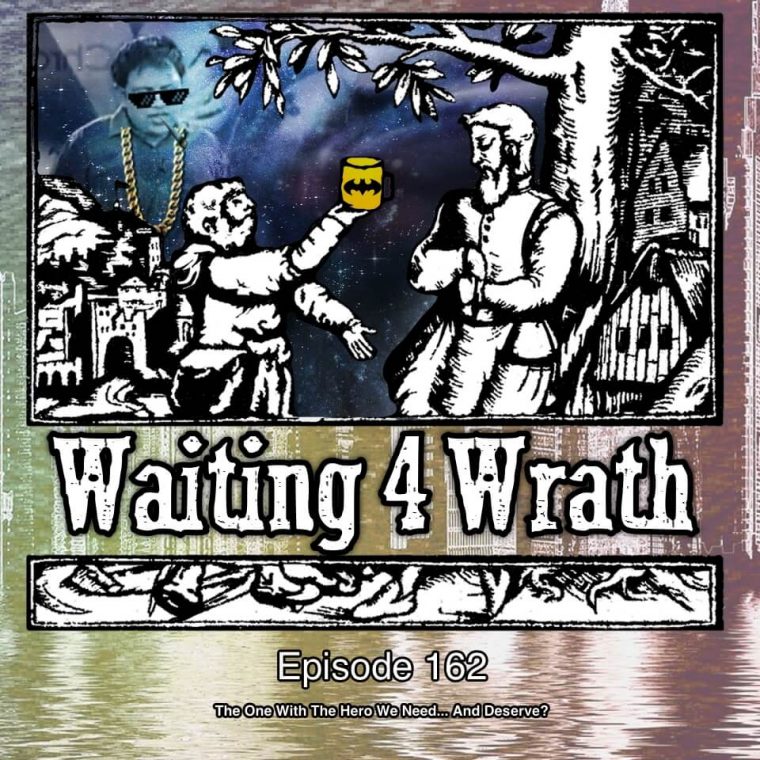 Episode 162 – The One With The Hero We Need… And Deserve?

In This Week’s Show, episode 162, a six-year-old deity calls 1-800-Batman to stop Patty praying for him!

Now, grab a beer and help us test the god hypothesis — because, while Pilumnus (Roman Nature Deity)  hasn’t struck us down yet, we are trying his patience!

This week I have a question… What are the proper seasons greeting for a car salesman? Will I offend anyone if I wish them a Happy Honda Days, or should I go with a Merry Toyotathon? I guess I could just say Happy winter car sale season…

In Roman mythology, Pilumnus (“staker”) was a nature deity. He ensured children grew properly and stayed healthy. Ancient Romans made an extra bed after the birth of a child in order to ensure the help of Pilumnus. He also taught humanity how to grind grain.

A ceremony to honor the deity involved driving a stake into the ground.

“Born of a flood and centuries-old Belgian text, 1554 Black Lager beer uses a lager yeast strain and dark chocolaty malts to redefine what dark beer can be. In 1997, a Fort Collins flood destroyed the original recipe our researcher, Phil Benstein, found in the library. So Phil and brewmaster, Peter Bouckaert, traveled to Belgium to retrieve this unique style lost to the ages. Their first challenge was deciphering antiquated script and outdated units of measurement, but trial and error (and many months of in-house sampling) culminated in 1554, a highly quaffable dark beer with a moderate body and mouthfeel.”

A possible follow-up, but really just because these people suck and we think it’s funny, the Australian couple that said they’d divorced if the gays could marry (Nick and Sarah Jensen)… didn’t. Apparently, these hateful assholes really were meant to be together… http://bit.ly/2j2rZ1S

“My previous public comments regarding civil divorce never envisaged me separating from my wife, but rather our marriage from the state,” he said in a text message.

“The legislation currently makes it untenable for us to do this under the law. The point we were highlighting and that still stands, however, is the fact that a redefinition of marriage changes the agreement under which we were originally married.

We have new patrons!

And special thanks to patrons Jaded Zappa and Robert and Amy of Secular Yakking!

This Show Is My Spirit Animal
By: Vxexec350 (Australia)

As an interstate truck driver in Australia, I spend a lot of time alone. It’s great to spend time with friends with common interests. If you like beer, ridiculing the ridiculous and laughing with or at your mates, this show could be your spirit animal too.

I have been lost. Going through life without purpose. This awesome podcast saved me. They discuss all important topics of the day, pointing out hypocrisy restoring our faith in humanity. I have listened to the entire backlog and it has lifted my spirits. Recommend to everyone looking for their spirits to get lifted. And Steve is my spirit animal. :)

She is quite spirited in the bedroom by the sounds of it… (Thanks, Tara!)

This week I learned that God has a paywall too, at least according to Ol Patty

But that’s not really how terrorism works, because… the story:

Just enjoy it.
~A

Remember to Be Yourself – http://bit.ly/2jmvc01

Unless you can be Batman.

Then you should be Batman.

Want to make your young child have the gumption to work on a boring task? Dress it up as Batman!

Bob the Builder, Rapunzel and Dora the Explorer work too, apparently. But who wants to pretend to be to be a professional chore do-er, a hostage, or an illegal immigrant in this climate?

“Taking a mental step back from one’s own situation could help children persevere in the face of distraction,” the study said.

In the study, 180 4- and 6-year-old children were asked to complete a repetitive task for 10 minutes.

Children were put to work on repetitive tasks that they were told very important. But they could take breaks by “playing an extremely attractive video game” on an iPad.

No surprise: The kids spent 37 percent of their time on the task and 63 percent on the iPad, the World Economic Forum reported in an article published in coordination with Quartz.

Naturally, 6-year-olds stayed on task longer than 4-year-olds. However, children across both age groups who impersonated a superhero or other character fared the best at staying on task.

“Perseverance is necessary throughout our lives, from children struggling to sound out each letter on the page as they learn to read, to college students studying organic chemistry late into the night,” the study said. “Whether due to the tedium of the task at hand or the pull of the many more immediate gratifications that abound in our environments, success often requires persisting through some ‘unpleasure.'”

Just like we are!
Not gonna lie, by the time we got to this one we were half in the bag.

Well, it’s not a feature. Each week I’ve been writing up, formatting, copying to Patreon and reformatting the notes each week.
A lot of sites, like Patreon and a few similar sites we’re looking at, don’t allow pasting of formatted text and reformatting the notes on each site eats up a lot of time. So, if the following story looks like something you want to hear us drink out way through… go send us a buck at Patreon. If it was someting worth listening to, thanks for supporting the show! If neither … blame Shea, it’s been working pretty well for me.
~ A

Also – fun fact – 150 Yen is $1.32 USD, so yes, I was wrong… but I feel like that’s still in the same ballpark. I mean, it’s not the Canadian Dollar or two years ago’s British Pound… It could be two years from now’s British Pound – boom!
Brexit joke in the show notes, take that Britain!

Also, go you! Think of all the silly people who are going to waste their time letting me know wrong and I am when they could have had the gratification of me knowing I’m wrong, but also telling bad dad jokes!
~ A