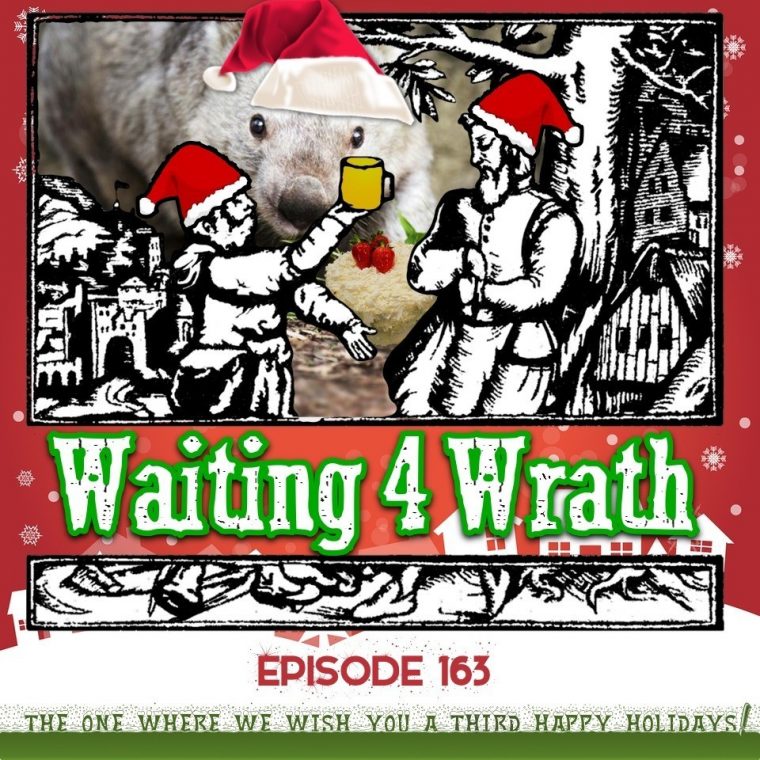 Episode 163 – The One Where We Wish You A Third Happy Holidays!

‘Tis the season for another blasphemous episode of Waiting for Wrath;
where we fill festive socks with treats and oranges;
when making the jolly is basically the point;
where we ho, ho, ho – except Jenn – I’m not brave enough to rhyme that out,
We’re not experts and we make no apologies for our presents — so — let’s have a candy-cane, revel in the gingerbread cookies and, some god forbid, turn on a heater or three.

In This Week’s Show, episode 163 we deck the halls and paint our balls in the hopes that Saint Beermas will soon be here!

Now, grab a beer and help us test the god hypothesis — because, while Father Christmas hasn’t struck us down yet, we are on his naughty list!

Did you know that, instead of silly milk and cookies, the traditional gift for the British Isles’ Father Christmas is mince pies and whiskey?

Russel from Adelaide wants us to let Shea know he is his spirit animal. So, Happy Hanukkah, Shea.

Favorite German listener Dennis wrote in with an interesting note re: a discussion from 2 episodes ago where we talked about humans consuming milk from other animals. Certain types of ants herd other insects, like mites and aphids, and “milk” them for their excretions. Yummy sweet aphid juice! So yeah, you’ve never met a vegan ant HAVE YOU? (Also, Dennis, we’re very sorry for your loss and hope your holiday season improves. But your grandmother sounded like a helluva woman.)

I say it frequently and gratefully — you are the best people on the internet!

Patreon’s poor choices sent our pod-community into a tizzy. We chose to wait it out and see what happened. We couldn’t have done that without the incredible confidence we have in you! Few creators enjoy that sense of community. We are fortunate and humbled, thank you all

Cause we’ve got fuck all else.

To set the tone will start with an oldie but a goodie – everyone’s favorite child-sack-beater … Krampus!

Or, Frau Pancetta as she’s known in American…

We talked about the Jólakötturinn, how could we forget the Jólasveinar?

8. Grýla
We’re really gonna have to call this 7.5 though…

Other than the good news that Roy Moore did not appeal to African American voters in Alabama, most current news items are pretty shitty. The FCC is run by a man who thinks it’s funny to troll the American people after voting to disrupt their internet freedom (pls don’t watch the video he released where he is dressed as Santa, for rage reasons), the Trump administration has decided neither science nor evidence should factor into health research (also the word ‘fetus’ is banned? are we going to call them undercooked babies now?), Matt Damon can literally never just shut up about anything and etc… So, finding a story with actual holiday cheer was daunting:

Patreon Story – Bye-Bye to lamest of the Ghostbusters – http://bit.ly/2CWe2KL

This week’s patreon story is available to everyone, because holidays!
So if you like what you’re having, go ahead and gift us a buck and you’ll get more just like it every week.
~ Aaron

I’m still trying to glean the smallest of drops of goodness and joy in our current times. Hence, I am bringing you some information about one of SCROTUS’ highly unqualified appointees for a federal judge. Brett Talley, a 36-year-old lawyer, has been nominated by the Trump administration despite having never tried a case. This position is a lifetime appointment, and it seems all Dumpster is looking for in regards to qualifications is ultra-conservative beliefs and a relatively long expected lifespan. Oh, also, he was unanimously deemed as “unqualified” by the ‘American Bar Association’. (Don’t be too excited for him for this distinction, he’s only the FOURTH of this Administration’s nominations so far to be labeled this. Look up Michael Spencer Petersen for a video of a staggering display of incompetence.)

So he’s not the only TERRIFYINGLY out of his league appointee, but happily, he has bowed out of consideration. So that’s the good news portion of this story. However, he is too full of wackiness for me to just let him go without comment.

In one of his author bio he describes himself as working as a lawyer “to put food on the table,” a phrase that truly signals a real passion for the law. A 2014 Washington Post article notes that he once named an Antichrist character after one of his woman coworkers, which we are assured she was totally cool with. Caitlin Conant was then Sen. Rob Portman’s communications manager while Talley was also working as Portman’s speechwriter.

In addition to novellas with Lovecraftian flare, Talley also explained that his favorite way to spend a Friday night was to check out old, abandoned buildings.

“Factories, insane asylums, that sort of thing,” he said. “I am always trying to get people to go with me, but no one ever does. You have to watch out or you’ll get arrested for trespassing.”

Hilariously, on his questionnaire for the Senate Judiciary Committee Talley says that he was part of The Tuscaloosa Paranormal Research Group from 2009-2010. The group, according to its website, searches for the truth “of the paranormal existence” in addition to helping “those who may be living with paranormal activity that can be disruptive and/or traumatic.”

The group’s founder David Higdon, who later co-authored a book with Talley (Haunted Tuscaloosa), told the Daily Beast he doesn’t recall any specific cases the two worked on together. Those would be ghost-hunting cases, not “trying in court” cases, because, again, Talley has never done one of those.

When not hunting for ghosts or writing about them, or blogging about racism and horror, he creates homemade trailers for his books and features them on his YouTube channel. Please to enjoy: https://www.youtube.com/watch?v=zOMDyWV8jho

A Birthday That Actually Matters!

As of this recording, we will be celebrating the best seasonal birthday, the one, the only, Winnie the wombat!

What, who did you think I was talking about?

Winnie’s 31st birthday makes her the oldest wombat in Australia and probably the world.

“Common wombats generally live in captivity for between 25 and 26 years, so it’s actually quite rare and unusual to have a wombat live over the age of 30,” Renee Osterloh from the National Zoo and Aquarium said.

Winnie was orphaned as a joey and hand raised at Birdland Animal Park at Bateman’s Bay before moving to Canberra’s National Zoo in 1992.

Winnie is also known for curling up into blankets in the middle part of the day.

“It’s quite difficult to then see her, but you see this movement under the blankets when you walk past and you know that she’s snuggling in deeper into that sleep,” Ms. Osterloh said.