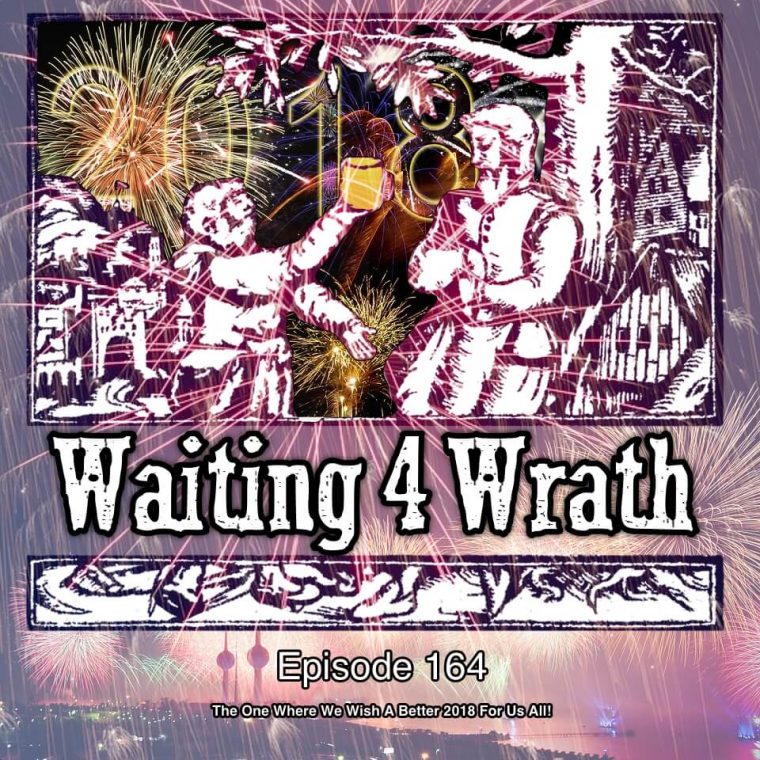 In This Week’s Show, episode 164, 2017 was a hard year to swallow, so we move forward and onward to Egyptian glory.

Now, grab a beer and help us test the god hypothesis — because, while Illujanka (snake-demon of Hittite myth) hasn’t struck us down yet, we are trying its patience!

Did you know that in Hittite myth, Illujanka was crushed to death by Teshub, the weather god? This symbolized the beginning of a new era and was read on their New Year’s Day.

New patron BBQattheLaserFactory – you might want to turn those lasers down eh?

Heartfelt thanks to Louise in Scotland for the one-time donation and very kind words.

Felicia with Utah Outcasts would like to join forces with The Yeti if he pursues twerking for Patrons.

in the UK, where nearly a dozen companies have admitted to using divining (or dowsing) rods to detect leaks or figure out where to dig for water.

While there are variations on how these rods work, the version we’re talking about here involves holding two sticks out in front of you, parallel to each other. You walk around the area, and if the rods “detect” water, they’ll pull themselves toward each other and cross. If that sounds ridiculous, that’s because it is.

Overall, Le Page says, 10 of the 12 companies she contacted use or allow divination as a way to detect… something. Even though there is literally zero evidence that they work. It’s a waste of time, money, and resources.

In a statement to the Guardian, the company added: “Using dowsing rods to find leaks is an old-fashioned method. We don’t spend money on it, or issue rods to our engineers.”

Severn Trent told the Mirror: “We don’t issue divining rods to our engineers but we believe some of our engineers use them. As long as the leak is found and repaired quickly, by whatever means, we’re happy and so are our customers.”

The industry’s trade body, Water UK, also blamed individual engineers. It said: “The reality is that water companies are spending millions of pounds each year on innovative leakage detection schemes such as thermal imaging drones, sonic listening devices and other high-tech electronic mapping equipment, which has helped reduce leakages by a third since the 1990s, and it’s unlikely that a few individuals doing some unofficial divining has had much impact.”

Christopher Hassall, a specialist in water management at the Leeds University school of biology, expressed alarm at the continuing use of what he dismissed as witchcraft.“If they are going to be passing the charges on to us for using dubious practices, then that’s something everyone in the UK should be concerned about,” he told the Guardian.

Good To The Last Drop – http://bit.ly/undefined

Continuing the skeptical bent from the last story I forgot we evergreened for this show… swallowing for science!

Good news ladies, “Semen is ‘good for women’s health and helps fight depression’” according to the Daily Mail.

Michael Castleman of Psychology Today of all fucking places went with “Attention, Ladies: Semen Is An Antidepressant”.

And Toni at Her Campus — apparently a lax blogging or writing system somehow associated with the University of Ottawa that prepares students for exciting careers with journalistic megaliths like Buzzfeed, Glamour, and MTV — went with “Swallowing the Truth: The Many Benefits of Semen for Women”

So, clearly you should all be blowing everyone all the time and you’ll never be depressed… or as Her Campus puts it “This scientific breakthrough raises the age-old question women and gays all around the world have been pondering: is it better to spit or swallow?”

From the Daily Mail article — the original insofar as it was all over my feeds and the one I saw first — Oral sex is good for women’s health and makes you feel happier, according to a study which studied the effects of semen’s ‘mood-altering chemicals’.

The State University of New York study – which scientists carried out via survey rather than through practical experiment – compared the sex lives of 293 females to their mental health.

Semen contains another of chemicals along with spermatozoa, including cortisol, which is known to increase affection, estrone, which elevates mood and oxytocin, which also elevates mood. It also contains thyrotropin-releasing hormone (another antidepressant), melatonin (a sleep-inducing agent), and even serotonin (perhaps the best-known antidepressant neurotransmitter).

Clearly, we should all be swallowing … this story! aaah, see what I did there?

And the supportive partner should be doing his part as well, again from Her Campus “sexperts suggest men eat more fruits with natural sugar, like apples and mangoes, to enhance the sweetness of their ejaculate. They also encourage them to drink plenty of water to flush out the toxins that could be contributing to the bitter and extra salty taste.”

They continue on like that for another 5 paragraphs before finally suggesting you just go buy a book called Natural Harvest – it’s a spunk cookbook. Finally, they conclude with ‘it’s so good for you should even pay for it on your face’ by telling us about Spunky-Spas, whose treatments range from a 55 pound, 45-minute “hair conditioning” to the 250 pound, 10-minute facial rub… out.

The research suggests it is not just that women who are having sex are simply happier, but that happiness levels might be related to the quantity of semen within their body.

So there ya go – straight from the mouths of sciencers into… well… your mouth. Unless you want to die of vitamin D deficiency…

From the NHS review of the paper: http://bit.ly/2BMLaVu

“The “news” is based on research that is more than 10 years old.
The facts used to support the lascivious claims come from a small study looking at depression scores of women students who used condoms during sexual activity compared with those who did not. It found that sexually active women who did not use condoms reported fewer depressive symptoms than those who did. From this the researchers seem to assume that semen may have antidepressant qualities.”

This study is full of holes – and extreme caution should be used when interpreting anything from it. Researchers only gleaned information about depression symptoms (not a diagnosis of depression), how often the women had sex, and whether they used condoms, via an anonymous questionnaire. All of these facts greatly limit the reliability of the results.”

It is also worth noting that the study has also not assessed diagnoses of depression, only depression scores.”

The journal is paywalled, because fuck science, but thanks to the power of an edu email address, I got a copy and read it.

The four-page paper, to summarize, goes a little like this:

“A sample of 293 college females agreed to fill out an anonymous, written questionnaire designed to measure various aspects of their sexual behavior, including frequency of sexual intercourse, number of days since their last sexual encounter, and types of contraceptives used.?

They were also asked to answer the Beck Depression Inventory – a simple but commonly used test updated in 1996 with the DSM v4. So meh.

So, the Results then:

“Most of the respondents answered most of the questions, but in a few instances items were left blank.”

So… fuck those answers I guess.

“Significant correlations were found between DBI scores and the length of time (in days) since engaging in sexual intercourse.”

And
“The only correlate of the relationship that approached significance was the frequency of sexual intercourse, which was inversely proportional the to the length of relationship”

The study, in air quotes “found” that women who weren’t getting laid and women who were but used condoms had basically the same scores on depression, thoughts of suicide and other bad shit. Whereas the ladies getting on the reg without the love glove showed signs of improved mental state.

However, as the study itself says

“Another competing account of the proposition that same functions as an antidepressant might be that sexually active females who never use condoms were less depressed simply because they were having sex more often.”

But weren’t we talking about swallowing?
Yes, we were. But after reading the paper “oral” only comes up twice… hehe.

The first is distinguishing between condoms and oral birth control, which oddly showed that a woman on oral contraceptives has the same reaction to semen as one using condoms … a problem in the study? Yep.

So there ya go – is swallowing well for you? Who the fuck knows, these people didn’t even a little bit look at that question in this entirely fucked study.

They took self-reported data from college women, who presumably don’t want to be thought of as sluts. Correlated it with self reported protected or unprotected sex, and then disregard the need for follow up data, ignore of the women are in relationships (though they did divide the women into two groups accordingly no consideration was given to either group when considering how a long-term relationship might affect both general happiness (or sadness) or the likelihood of feeling the need to use protection), and then injected their own ideal conclusion absent any reliable metrics – which the news picked up as “swallowing is good for you”.

A story that could have been very tragic turns out to be really sweet and heartwarming: the root – http://bit.ly/2CjBghu

Single mom Sophia Reed from Oklahoma City had spent all her spare money (including for Christmas) to move herself and her children to a nicer new apartment. For Christmas, they were just planning on celebrating the new home.

Her children decided to hatch a plan to surprise their mom with a Christmas present. Her oldest son, 13yr old Diarus, began sneaking out to collect cans to in order to buy a gift for their mother.

One evening she notices he was gone and had been for some time. Like any Mom she became worried, and after a while called the police. His sisters were afraid he was going to get into trouble but didn’t want to ruin the surprise.

Happily, he was just searching the neighborhood and saw the police cars arrive at his house. He explained to his mom and the officers what he had been doing. It so touched the responding officers so much that they took the story back to the station.

Soon the area under the family’s Christmas tree started to be loaded with gifts. Officers had banded together and raised some $800 and also bought the family Christmas and housewarming gifts.

“Most of the time when I see the police, it’s, like, bad stuff,” Diauris said. “Up here I guess it’s changed, good.”

“They caught us at the right time, and we are so grateful,” his mom added.

Exploding Elephants and the Science of Size | Uncrate

The Floor is Lava | Uncrate

Spider-Man: Into the Spider-Verse | Uncrate

The Theory of the Universal Basic Income | Uncrate