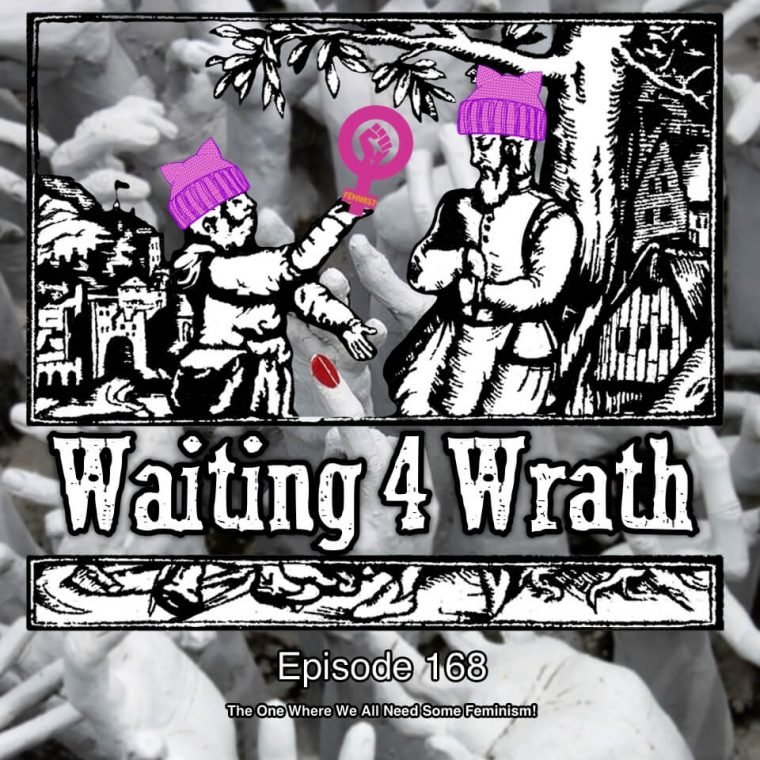 Episode 168 – The One Where We All Need Some Feminism!

In This Week’s Show, episode 168, we put our brain-smarteners on and have an Olympic-level laugh at the ghost of Captain Jack doing shots off Opera’s ass.

Now, grab a beer and help us test the god hypothesis — because, while Morpheus (the Greek god of dreams, and god of teaching you Kung-foo)  hasn’t struck us down yet, we are trying his patience!

This week I learned that when people tell me i’m going to regret that in the morning I sleep till noon, because i’m a problem solver.

Did you know that Morpheus is often depicted as lying on a bed made of ebony, in a dim cave, surrounded by poppies?

You need to listen to this now!

Amazing Podcast. Its so hilarious without being pretentious. Always makes me laugh.

Follow-up from Jenn’s story from a year ago: In episode 114 we talked about Jeanette Epps, a female astronaut who was slated to be the first African American crew member aboard the International Space Station. Unfortunately, it was announced this week she has been removed from the mission. So far it has not been revealed why she was pulled.

Missing this segment, listen to it now at http://patreon.com/w4w

Enormous athletic sex scandal in the final stages of the trial. US Gymnastics, Michigan university seen to be complicit with revolting sports medicine doctor.

If you’ve somehow missed this story, here’s a quick summary. Larry Nassar was the USA Olympic national-team sports medicine doctor from 1996-2014. He had been working with the teams in some capacity since 1986. He also ran a clinic and gymnastics club at Michigan State University. He was fired in 2015 for “athletic concerns”.

Well, “athletic concerns” must be pithy code for being a terrible sexual child predator. The first public accusations of sexual abuse came out in September 2016. He was then arrested by the FBI in Dec of 2016 after more than 37,000 images of child pornography were found on his computer, which included videos of him molesting underage girls. (side note: He received 60 yrs for the computer findings)

Golly gosh, who could have seen this coming? Surely this just came flying out of the void and took everyone unawares. Right? Yeah, no… this is basically the Olympic version of the Penn State sex abuse scandal, complete with complicit adults and institutions, money and prestige gave more importance than children’s lives, you know the drill.

Since the first public accusations, over 150 people have accused him of abusing them. Almost all the abuse was perpetrated under the guise of a medical exam. It’s also been shown that USA Gymnastics, Michigan State and a variety personal of coaches and trainers continued to dismiss or ignore complaints from the victims FOR YEARS.

Anyway, that’s the basics of the story. But I’m over talking about the multitudes of terrible people in this story, I want to talk about the survivors. Because they are NOT allowing themselves to be just victims and took their anger and hurt directly to Nassar. During his sentencing (which he pled guilty and is receiving a minimum of 25yrs) Mr. Nassar had to listen to dozens (144 signed up to make statements) of the young women he traumatized give ‘victim impact statements’…for four days. And these ladies came out swinging:

Kyle Stephens was abused by Nassar from when she was 6 years old until she was 12. “Little girls don’t stay little forever. They grow into strong women that return to destroy your world.”

Marta Stern: “Your monstrous acts have taken away so much from so many. My silence ends today.”

Jessica Thomashow is only 17yrs old and was abused starting at age 10. Her emotional statements were followed by a direct statement from Judge Aquilina: “Nassar is going to break while you’re healing.”

Olivia Cowan directly addresses leaders at Michigan State: “I’d like to take a moment to comment to MSU’s board of trustees and President Simon….it sickens me that for 16 months, you allowed children to see Larry Nassar under your guidance, while he was under criminal investigation.Where were you when we needed you?”

Mother of Victim 105: “I hate you. I wish our daughter’s pain on you…I’m sure the inmates in prison will take care of that. They don’t care much for pedophiles, from what I hear. Good luck with that.”

Stephanie Robinson, who only last week decided to not remain anonymous: “I came to the stand as a victim and I leave as a victor.”

Lindsey Lemke, a former Michigan State gymnast, lashed out at the university and specifically its (as of today, recently resigned) President Lou Anna Simon: “To Lou Anna Simon: You are no president of mine as a student and former athlete of MSU. Guess what? You’re a coward too.”

Simon had reportedly told a woman she was “too busy” to return to the courtroom and listen to the hearing after being in attendance on Wednesday. “None of us had time in our schedule for Nassar to abuse us, but we had no choice.”

Lemke also accused two different coaches of covering up abuse. “Larry, I hope you, John Geddert, Kathie Klages, USAG and all others realize you’ve pissed off the wrong army of women.”

Gold medal gymnast Aly Raisman is a fucking force of nature. She had a 13-minute statement that not only raged at Nassman but members of USA Gymnastics and the USA Olympic committee. “You do realize now the women you so heartlessly abused over such a long period of time are now a force, and you are nothing.”

She also made clear her disgust in Nassar’s pathetic attempt to get out of hearing the statements. After one day of testimony, he sent a letter to the judge saying (in regards to days of the testimony) “I’m very concerned about my ability to be able to face witnesses this next four days mentally.

Raisman told her abuser that he is “pathetic to think that anyone would have sympathy for you.” She told Nassar that she and the other athletes he abused “will use our voices to make sure you get what you deserve: A life of suffering spent replaying the words delivered by this powerful army of survivors.”

She also told Nassar that she “will not rest until every last trace of your influence on this sport has been destroyed like the cancer it is.”

Nassar made a short statement that is supposedly an apology, saying he was hopeful the community could move forward: “For all those involved, I’m so horribly sorry that this was like a match that turned into a forest fire out of control. I have no animosity toward anyone. I just want healing. … We need to move forward in a sense of growth and healing and I pray (for) that”.

Patreon Stories can be downloaded right now at http://patreon.com/w4w

Justice Ruth Bader Ginsburg said she plans to remain at the Supreme Court as long as she is able.

Ginsburg, who’s 84, said during a Sundance “Cinema Talks” conversation on Sunday that her health is “very good,” the Los Angeles Times reported.

“As long as I can do the job full steam, I will be here,” she said.

On Sunday, Ginsburg also weighed in on the “Me Too” movement, saying: “I think it’s about time.”

She said women were silent for so long. She added that the movement has “been great” so far.