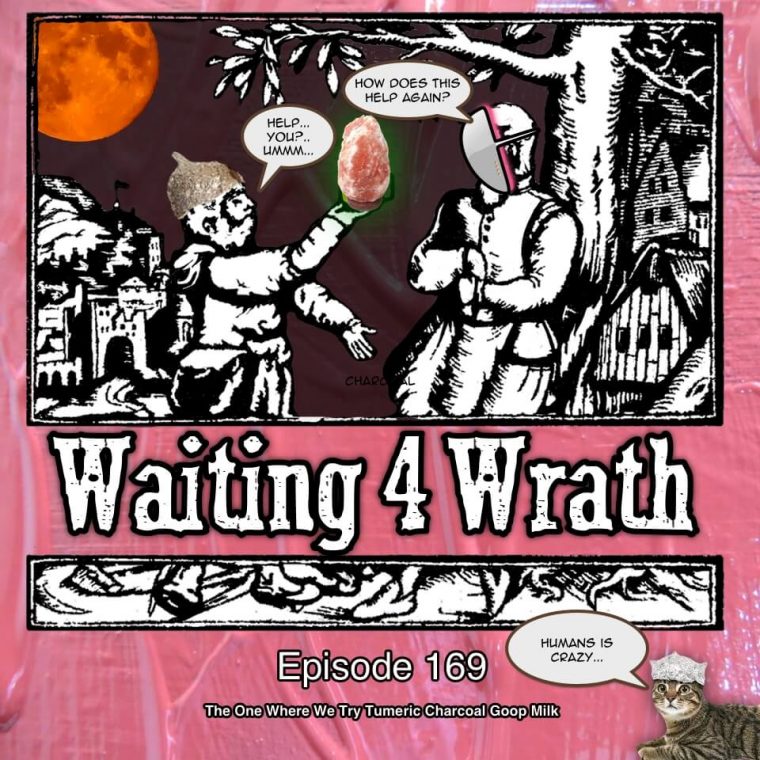 Episode 169 – The One Where We Try Turmeric Charcoal Milk

In This Week’s Show, episode 169, Big Gay Jim joins us to tell us all about the HIV, the AIDS, and what you can do for them…. I mean, for people with them.

Now, grab a beer and help us test the god hypothesis — because, while the Venti (Roman gods of the winds) hasn’t struck us down yet, we are trying their patience!

This week I learned that the safest music to air drum too while driving is Def Leppard, you can keep one hand on the wheel. (Rick Allen)

Did you know that, other than being a drinking measurement, the Venti were also known as the Tempests? Because of their connection with storms at sea, Roman naval generals often sacrificed all-white animals to keep them placated before a voyage.

As Steve says it’s a good show! I’ve listened to a few now too and I suggest you give them a go eh!
~ A

Follow up: In case you missed it, Honorable Judge Bad Ass Rosemarie Aquilina sentenced epic piece of shit Nassar to up to 175 years for his pervasive abuse of young female gymnasts. “I just signed your death warrant.”

Speaking of judges, the less honorable soon-to-be ex-Judge Assface McFuckwhistle who barely sentenced convicted rapest Brock “the rapist” Turner to almost jail is up for retirement on the June ballot, find out more at www.recallaaronpersky.com

We’d like to say goodbye to Rob and Amy of Secular Yakking Podcast, who are calling it. wrapping up their show after several years of good work. All the best. Robert and Amy are amazing people and fast friends. We can’t wait to see what happens next with the Original Motto Project (link soon). Hit them up on twitter and thank them for years of great shows and give’m a send off deserving of the great people they are!

Finally, before we dive into the headlines I’d like to encourage you all to check out WyoAIDS.org — and not just to tell me how great the redesign is ;) Jim?

“The money we raise stays here in Wyoming and is used to support those living with HIV/AIDS. WyoAIDS pays the costs that insurance, government assistance, and other programs don’t including dental and travel help.”

The GOOP invades the Big Apple, disappointed apple not organic.

If this past weekend you sensed a disturbance in the force of bored wealthy, white women, you were not wrong. The first East Coast summit of Gwyneth Paltrow’s tragically popular pseudo-health, not-even-close-to-science line of branding, GOOP, held its first summit (In Goop Health) in NYC January 27th. (This follows the inaugural summit in LA last June.) And it was pretty much as weird, useless and privileged as you would imagine.

In case you missed it, I discussed some of the plans as well as a hyped-speaker in episode 161. This is sort of a follow-up with testimony.

Proving once again that just because you are rich does not mean you deserve to be, the event was entirely sold out (tickets for the one-day event ranged from $650 – $2000). It also featured a few big-name lady celebrities that I can no longer have any respect for including Drew Berrymore, Bryce Dallas Howard and Chelsea Handler. Of course, Saint Gwyneth was also in attendance.

So what exciting activities were packed into the GOOPy 8hrs? From Rana Rafael writing for Fast Company:

It began with a group sound meditation of “binaural beats” and “sacred acoustics.”

“A…healer by the name of Karen Newell instructed 600 attendees to close their eyes and “follow their heart’s center. …As you breathe in, silently say ‘let,’” Newell commanded. “As you breathe out, silently say ‘go. Let go. How many of us actually live our lives very consciously, with love at the center?”

Throughout the day there was a variety of high-end “wellness activities” and spa treatments for participants to choose from. These included LED light mask treatments (see pic above), aromatherapy oil massages, manicures from a toxin-free nail salon and facials. The longest lines were reserved for IV drips. “I’ll get this instead of coffee,” says a 50yr old attendant getting a needle shoved in her hip.

Of course, before anyone asks, the Jade vagina eggs were in attendance. They started at $55 and “help cultivate sexual energy, clear chi pathways in the body, intensify femininity, and invigorate our life force.”

There was a wide selection of overly priced barely-foods including: turmeric chia seed pudding, vegan charcoal ice cream, gluten-free tamales, avocado toast, and Moon Juice (It’s actually a line of food with too much blah blah for a simple description. It’s into is “Becoming The Alchemist And Thriving Cosmically” and past the beginner’s guide to “adaptogenic herbs,” “raw foods,” and other “alkalizing ingredients,”. Some recipes include ‘Hot Sex Milk’ and expound the healing power of the full moon. It’s also written, incongruously, by a woman with last name of Bacon.)

Quick side trip with Bacon: when a large Rose Quartz Crystal was stolen from her shop she had a delightful online meltdown. The warning issued, straight from her Instagram:

This loving rock has given so much to an entire community and has much more to share. To whomever took her out the door, you do not want the energy of a stolen crystal, please trust me!

This leads right into the spiritual items available to the GOOPies (yeah, that’s what they call themselves). These ranged from psychic mediums communicating with dead relatives to Tarot card readings and 10 hours of meditation. One medium that Paltrow introduced herself, Laura Lynne Jackson, even informed the crowd that “death did not exist”. (Good news: Paltrow’s deceased dog will supposedly be waiting for her at the pearly gates.) She doesn’t clarify exactly what it is that causes people to go to the “other side”, but did have some messages. Again from Rana in Fast Company:

The medium proceeded to present herself as a conduit from the great beyond with a mix of success and failure inspiring as many tears as moments of nerve-inducing cringe. “Is there a John, a Julian, or a name with a J in your family?” Jackson asked one middle-aged mom. No, the woman replied.

But for all the attendees who questioned the authenticity of psychics–and a few who even felt the session was a bit predatory–there were just as many who hungrily ate it up. When Jackson asked who in the audience had experienced connections with the dead, a majority of the room sheepishly raised their freshly manicured hands.

Not surprisingly, not much science was discussed. As Goop chief content editor Elise Loehnen says, “I think it’s easier to metabolize mental and spiritual-enhancing techniques than really heavy science, particularly in a panel format.” So yeah.

Paltrow slightly touched upon her exploratory approach to her own wellness during a talk with the audience. The CEO lauded her brand for being “open-minded” and a “thought leader” within the booming health and wellness industry–with a mild acknowledgment of Goop’s woo-woo roots.

“I think we’re brave, and we’re unafraid to ask questions,” Paltrow declared. “We like to shine light on things and we do that with our insatiable sense of curiosity.”

“We love science and data and we make a lot of our decisions based [on that],” she continued, a nod to rampant criticism of her site’s many unscientifically verified clams, “but we also like the unexplained and unexplored. The sweet spot is somewhere in the middle. There’s not always a double-blind study.”

Statistics released verifying that progress for LGBTQ+ people has been reversed since Trump has taken office.

Happily, we have Jim with us this week for his Good Gay News to balance out me with my news of unsurprising news of the shitty.

Since we all lived through 2017, many of us in the US, it should come as no surprise that anti-LGBTQ+ sentiment rose for the first time in years.

The Harris Poll is a survey that has been active in the US since 1963 and tracks social views and public opinions. GLAAD has been utilizing the Harris Poll since 2014 to track opinions on LGBTQ+ acceptance and opinions.

For the 1st time since tracking began a decline has been noted:

The survey’s results indicated a significant decrease in comfort among heterosexual people in personal situations relating to LGBTQ identity. These situations included “learning a family member is LGBTQ,” “learning my child’s teacher is LGBTQ” and “learning my doctor is LGBTQ.”

GLAAD President and CEO Sarah Kate Ellis said in a statement sent to NBC News. “This report puts numbers to the bias that too many LGBTQ Americans have recently experienced.”

In a statement included within the report, Ellis said the decline in LGBTQ support “can be seen as a dangerous repercussion in the tenor of discourse and experience over the last year.”

“2017 brought heightened rhetoric toward marginalized communities to the forefront of American culture. Policies and headlines ran that were anti-LGBTQ including the President’s proposed ban on transgender people entering the U.S. military, confirmation of a Supreme Court justice opposed to marriage equality, and the passage of a state law in Mississippi which allows businesses to legally deny service to LGBTQ families.”

Granted, anytime a movement attempts to change societal ‘norms’ there will be some edd and flow. But unfortunately other negative numbers have been growing as well. There was a dramatic uptick in the number of reports of discrimination based on gender identity or sexual orientation. In this latest survey, the number jumped to 55 percent — an 11-point jump from last year.

Finally, and most disturbingly, the National Coalition of Anti-Violence Programs released a report this month tracking lesbian, gay, transgender and queer hate violence homicides for 2017. It indicates the number of related homicides rose 86 percent in 2017 with 52 people dying as a result of hate-based violence. Of these deaths, 71% are people of color.

To end on a not-entirely negative note, it was found in the Harris poll that acceptance for equal rights by non-LGBTQ+ respondents has remained steady at 79%.

Why Alien Life Would be our Doom – The Great Filter – YouTube

4-2: The History of Super Mario Bros.’ Most Infamous Level – YouTube