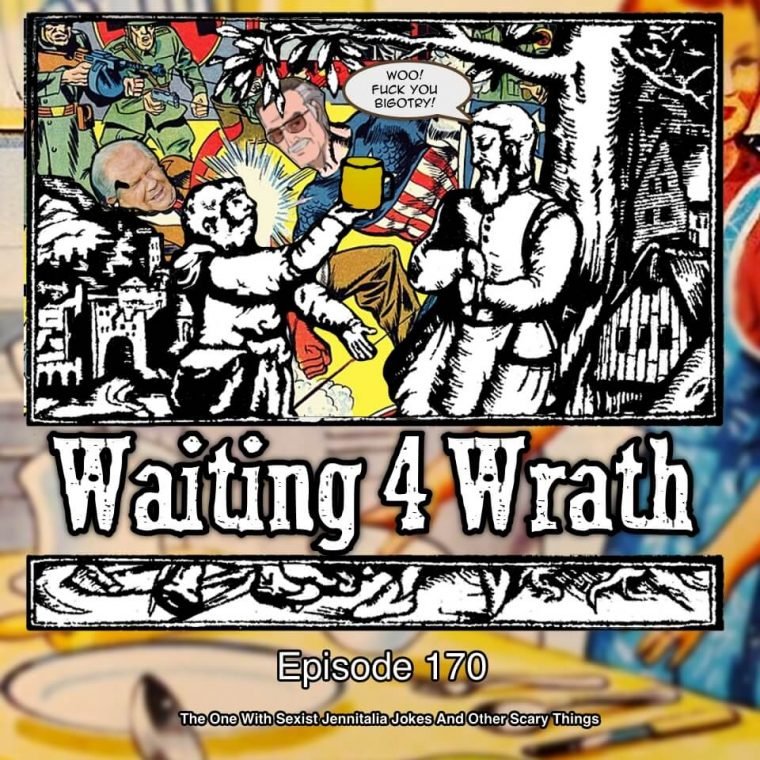 In This Week’s Episode of WrathfoWars, episode 170, we visit Pepsi’s new anti-Nazi Goose-spider factory and talk to their Gay Feminist Bartender.

Now, grab a beer and help us test the god hypothesis — because, while Lunang (the Hindu Kush river goddess) hasn’t struck us down yet, we are trying her patience!

This week I learned you can’t trust anyone named Natasha, because her name spelled backward is “Ah, Satan!”

Did you know that the people of the Hindu Kush mountains in Afghanistan pictured Lunang as a capricious young girl, personifying the turbulent nature of rivers?

No new Patrons or iTunes reviews.

Special prayers for the undisputed ruler of stupid, Patty Cakes Robertson who suffered a stroke, but apparently, thanks to the good lord above, is still alive (no word on whether the Stroke Center where he was sent played a role).

Special actual support for a ruler of the MCU, Stan The Man, who was also in the hospital this week. He’s fine now. Which is good, because I’m not ready for this…

Apparently proving that prayer works, the Napkin Pope heard our pleas and left a voicemail literally as we were wrapping up Round Table, and so, for fear of incurring his might wrath, let’s go to the phones!

HL1 – Farther From The Light Of God…

Haha, just kidding!! Welcome to your new nightmare, some prehistoric spiders came with scorpion tails. AND researchers say it’s possible, though unlikely, the creatures could still exist in the jungles of SE Asia.

The creature’s remote habitat and small size make it possible that tailed descendants could still be living in Myanmar, where the fossils were found, said Dr Paul Selden of the University of Kansas.

“We haven’t found them, but some of these forests aren’t that well-studied, and it’s only a tiny creature,” he said

Amber mined for centuries in Myanmar for jewelry is a treasure trove for understanding the evolution of spiders and their other arachnid relatives. This week, two independent teams describe four 100-million-year-old specimens encased in amber that look like a cross between a spider and a scorpion.

Scientists have named it Chimerarachne yingi, after the Greek mythological Chimera, a hybrid creature composed of the parts of more than one animal.

“We have known for a decade or so that spiders evolved from arachnids that had tails, more than 315 million years ago,” said Dr Russell Garwood of The University of Manchester, a co-researcher on the study.

“We’ve not found fossils before that showed this, and so finding this now was a huge (but really fantastic) surprise.”

It was capable of producing silk using its spinnerets, but was unlikely to have woven webs. And it’s not known what the tail would have been used for or if the spider was venomous.

Commenting on the research, Dr. Ricardo Perez-De-La Fuente, of the Oxford Museum of Natural History, said the “amazing fossils” will be important in deciphering the puzzle of the evolution of spiders and allied groups.

“Chimerarachne fills the gap between Palaeozoic arachnids with tails known from rocks (uraraneids) and true spiders, and the fact the new fossils have been wonderfully preserved in Burmese amber has allowed an unmatched detail of study,” he said.

“There are many surprises still waiting to be unearthed in the fossil record. Like most unexpected findings in palaeontology, it probably brings more questions than answers, but questions are what keep things exciting and push the boundaries of science.”

The research is published in Nature Ecology and Evolution as two separate papers. One paper, led by Bo Wang from the Chinese Academy of Sciences, described two specimens. The other, led by Gonzalo Giribet of Harvard University, presents two more fossil arachnids.

Statistics released verifying that progress for LGBTQ+ people has been reversed since Trump has taken office.

Happily, we have Jim with us this week for his Good Gay News to balance out me with my news of unsurprising news of the shitty.

Since we all lived through 2017, many of us in the US, it should come as no surprise that anti-LGBTQ+ sentiment rose for the first time in years.

The Harris Poll is a survey that has been active in the US since 1963 and tracks social views and public opinions. GLAAD has been utilizing the Harris Poll since 2014 to track opinions on LGBTQ+ acceptance and opinions.

For the 1st time since tracking began a decline has been noted:

The survey’s results indicated a significant decrease in comfort among heterosexual people in personal situations relating to LGBTQ identity. These situations included “learning a family member is LGBTQ,” “learning my child’s teacher is LGBTQ” and “learning my doctor is LGBTQ.”

GLAAD President and CEO Sarah Kate Ellis said in a statement sent to NBC News. “This report puts numbers to the bias that too many LGBTQ Americans have recently experienced.”

In a statement included in the report, Ellis said the decline in LGBTQ support “can be seen as a dangerous repercussion in the tenor of discourse and experience over the last year.”

“2017 brought heightened rhetoric toward marginalized communities to the forefront of American culture. Policies and headlines ran that were anti-LGBTQ including the President’s proposed ban on transgender people entering the U.S. military, confirmation of a Supreme Court justice opposed to marriage equality, and the passage of a state law in Mississippi which allows businesses to legally deny service to LGBTQ families.”

Granted, anytime a movement attempts to change societal ‘norms’ there will be some ebb and flow. But unfortunately, other negative numbers have been growing as well. There was a dramatic uptick in the number of reports of discrimination based on gender identity or sexual orientation. In this latest survey, the number jumped to 55 percent — an 11-point jump from last year.

Finally, and most disturbingly, the National Coalition of Anti-Violence Programs released a report this month tracking lesbian, gay, transgender and queer hate violence homicides for 2017. It indicates the number of related homicides rose 86 percent in 2017 with 52 people dying as a result of hate-based violence. Of these deaths, 71% are people of color.

To end on a not-entirely negative note, it was found in the Harris poll that acceptance for equal rights by non-LGBTQ+ respondents has remained steady at 79%.

Kara Coley, a bartender at Sipps in Gulfport, Mississippi, got an unusual phone call on the job last week.

A woman on the other end of the line asked, “Is this a gay bar?”

Sipps welcomes everyone, Coley explained to her, but indeed attracts a mostly LGBTQ crowd.

“Can I ask you a question?” the caller followed up. “Are you gay?”

“My son just came out to me,” the woman continued on the other end of the line. “And I don’t want to say anything that may mess him up in the head.”

Coley thought for a moment. Then she asked the woman if she accepted her son for who he is.

“You should definitely let him know that you love and accept him!” Coley said. “I think everything will be OK from there!”

The woman thanked Coley for her input and they parted ways.

“My heart is truly touched by this,” one Facebook user wrote. “A parent wanting to support correctly, and a beautiful response. This is progress. This is love and acceptance in the rawest form.”

“Kara, this old granny lesbian is so grateful for you, and for a parent that thought outside the box to get advice!” another user chimed in. “Keep being you!”

Ideally, parents should have access to better resources than their local gay bar when it comes to getting help with LGBTQ parenting. At the end of the day, though, the best thing you can do as a parent is make sure your kid understands you’re there through thick and thin.