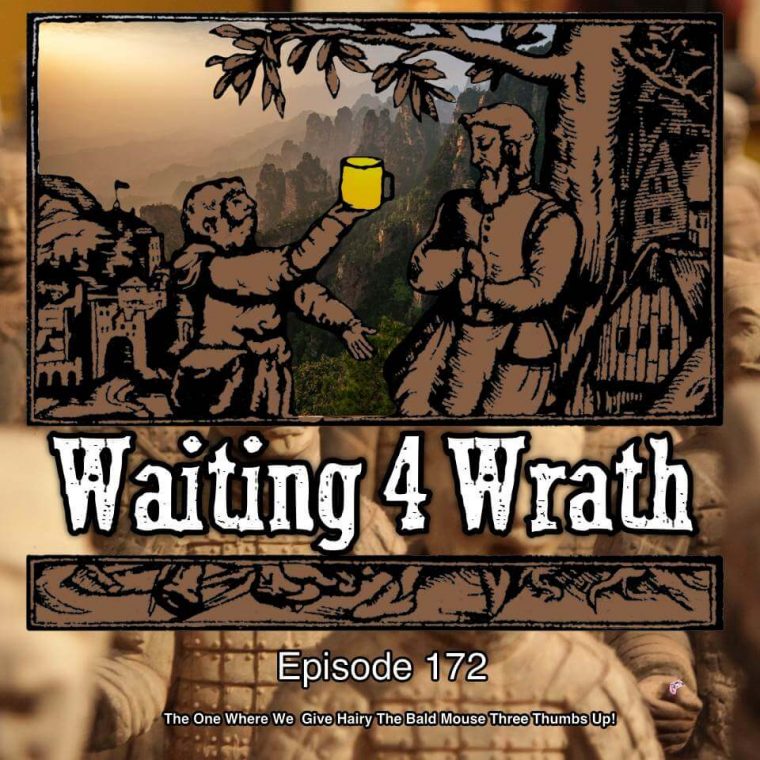 Episode 172 – The One We Give Hairy The Bald Mouse Three Thumbs Up!

In This Week’s Show, episode 172, We beat the lizard aliens at their own fried conspiracy game by smashing the board. Take that lizard people.

Now, grab a beer and help us test the god hypothesis — because, while Asclepius (the Greek god of the medicinal arts) hasn’t struck us down yet, we are trying his patience!

This week I learned that if you’re being chased by an animal just lay on the ground for five seconds. After 5 seconds the “5-second” rule takes effect and the animals won’t eat you.

Did you know that in the Homeric poems Asclepius in not referred to as a god? He’s merely a mortal. However, scholars think Homer’s getting the deity confused with a human doctor who is thought to also descend from Apollo.

First we need to start off with a quick announcement!

We’re happy to encourage donations to WyoAIDS.org by hawking our extra content. Specifically, if you mention us or the show in the donation notes / comment area, we’ll send you Patreon shows as a thank you.

So far that’s gone really well and thanking people has been pretty straight forward. But remember to fill in that comment box for goodies! If you’ve donated and didn’t get goodies — actually, patreons too as I think about it — get in contact and let us know. We need to make sure we’re saying thank you / rewarding you properly.

And John, just in case you forgot and you’re a listener, shoot us a message. If not, thanks anyway ;)

Speaking of patreon, Louise had a question and let’s address it on the show in case others have the same question. Re: charges for the month v/s charges per show.

HL:1 – Everything is bad for you

‘The West used lizards to spy on Iran’: Head of country’s armed forces claims reptiles that can ‘attract atomic waves’ were used by spies to locate nuclear facilities

Yet again, this is why we can’t have nice things. China is furious at the US after historic artifact damaged while on loan to Philadelphia museum.

From Sept of 2017 through March 4, 2018, The Franklin Institute of Philadelphia is hosting a traveling exhibit on the Terracotta Warriors of China’s First Emperor, Qin Shihuang. (A total of ten, valued at $4.2mil each, are on loan for the traveling event.) The discovery of these statues is one of the greatest archaeological finds in human history. They were re-discovered in 1974 when a Chinese farmer digging a well on his land unearthed bits of terracotta. Turns out there were thousands of life-sized warrior statues buried here, about 8,000 soldiers, charioteers, and horses unearthed in Xian, capital of northwestern China’s Shaanxi province, dating back from around 200 BCE.

These statues have survived over 2,000 years, but at least one will not be surviving Philadelphia unscathed.

Please to meet Michael Rohana, 24 yrs old, and an exceptionally important human being. I know this bc he decided he should be allowed to break into the exhibit (he was at the Franklin Institute attending an Ugly Christmas Sweater party when he wandered off to explore and enter the closed exhibit) and deface, or de-thumb, a statue.

On the night of December 21st, he used his cell phone as a flashlight to find and then take a selfie of himself and the statue. (Embracing the statue in a side-arm hug, bc of course.) Not content to slither away back to the party empty handed, he then snapped off one of its thumbs, put it in his pocket and left.

The theft went unnoticed until January 8, at which time the museum sought help from the FBI’s art crime team, who traced Rohana to his home on January 13.

He was subsequently charged with the theft and concealment of a major artwork, and released on bail.

The cultural centre said it had loaned its exhibits more than 260 times to 60 different countries over the past 40 years but had never before experienced “such a noxious incident”, according to the newspaper report.

Some of you have probably heard to the good news about McDonald’s freedom fries and regrowing your exceptional man-pelt!

If not, here are a few headlines…

According to the reporting on the study, Dimethylpolysiloxane is in everything and will make you grow a mullet of power – almost like Sampson hizself…

According to the study, released in the Biomaterials journal the breakthrough came after the scientists successfully mass-produced “hair follicle germs” (HFG) which were created for the first time ever in this way.

According to the Daily Mail, they are the ‘Holy Grail’ of hair loss research, as HFGs have never been regenerated before – which already poses a problem because HFGs have been around for the better part of 30 years, they’re just a giant pain in the ass… or head… or asshead, depending on where they got the samples they put in your head.

From the study by way of reporting:

“The key for the mass production of HFGs was a choice of substrate materials for the culture vessel,” Professor Junji Fukuda, of Yokohama National University, said in the study. “We used oxygen-permeable dimethylpolysiloxane (PDMS) at the bottom of culture vessel, and it worked very well.”

The technique created 5,000 HFGs simultaneously – which is awesome, because before you had to do it one at time… The research team then seeded the prepared HFGs from an HFG chip, a fabricated, approximately 300-microwell array, onto the mouse’s body.

“These self-sorted hair follicle germs were shown to be capable of efficient hair-follicle and shaft generation upon injection into the backs of nude mice,” Fukuda said.

And it’s all thanks to the dish of oxygen-permeable dimethylpolysiloxane (PDMS).

Yeah… I just said all that. Mind blown!

But What Does It All Mean?

Dimethylpolysiloxane, also bearing the name polydimethylsiloxane (PDMS), is a type of silicone. It is a non-biodegradable synthetic substance.

It’s commonly in used in items such as contact lenses, or medical devices. Even shampoos and conditioners use it (properties in PDMS give the hair a shiny and slippery feel). It’s also used in: caulk, lubricants, adhesives, mold release agents, polishes, heat transfer fluids, aquarium sealant, kinetic sand, silly putty, cosmetics and even breast implants.

In food, PDMS acts as an anti-foaming and anti-caking agent. Its presence changes the surface tension in many liquids – including frier oil – allowing for a more uniform appearance. It’s also used as a preservative, because it’s non-biodegradable, but mostly to stop fries from foaming over by places you might have heard of like:

Basically, if it’s American and fast food, it’s got this in it. And some in the UK.. for your “chips” but all in all, it’s harmless.

Show How Much Is In Fries Anyway?

None. There is none in the fries. Eating “Chips” as the mirror suggests won’t grow a goddamned thing except for your midriff.

It’s In the oil. And you should probably not just drink fryer oil.

A number of health agencies have reviewed the use dimethylpolysiloxane as a food additive over the years, and those studies haven’t linked it to any harmful side effects.

The European Centre for Ecotoxicology and Toxicology of Chemicals carried out a review in 2011 that found it had no adverse effects on the immune system and was “rapidly excreted unchanged in the feces” when ingested by humans.

So it’s not even in the fries, it’s in the oil, as a cooking agent. And there are less than 10 parts per million. The lab mice, their hair was grown literally in a petri dish of this shit. So know this won’t help you grow your hair. This really only works inside the lab, and the version of the chemicals are using his oxygen permeable, entirely different product then what is used to keep fryers from forming over.

Or we could just quote their conclusion:

In the present study, we demonstrated the fabrication of a culture array chip for the large-scale preparation of ssHFGs via a two-step molding process. Seeding a mixture of dissociated epithelial and mesenchymal cells on this chip resulted in their self- organization to form aggregates and subsequent ssHFGs. The supply of adequate oxygen through the gas-permeable substrate used to fabricate the chip was demonstrated to be essential for the spontaneous self-organization of HFGs capable of generating hair shafts after transplantation into the back or scalp skin of nude mice.

Regularly aligned hair follicles were generated by transferring ssHFGs from the chip via a collagen gel that enabled direct intracutaneous transplantation. Notably, the experiments conducted in the present study utilized murine cells, and thus, further studies of human trichogenic cells are required to assess the feasibility of this novel method for use in human hair-regenerative medicine.

Or, to sum it all up – we spent a fucking ton of money making a new petri dish to grow eyelashes on the backs of mice as a proof of concept and in no way do McDonald’s fries affect anything hair growth in a human. But you could grow yourself heart disease.

Sting the dog loves helping children with their reading skills. So when no one showed up to his library session earlier this month, his owner posted some lonesome looking photos of the canine to Facebook to encourage participation.

The 10-year-old hound is a retired race dog who now works as a certified therapy dog in White Bear Lake, MN. Once a week at the city library, Sting lets kids read to him for the Paws to Read program – an initiative that lets kids practice their reading skills by reading to complacent pups. He usually spends an hour at the library so at least three kids can get 20 minutes of reading time; but this week, no one showed up.

But that all changed once the pics of his little face and lonely reading nook went viral.

“People are asking if we could hold the phone to Sting’s ear so they could read to him,” librarian Ann Wahlstrom told TODAY. “The whole staff of a Petco in California called to say they love Sting. It’s just amazing, the outpouring.”

Much to the delight of the librarians, Sting’s schedule is now booked solidly until April, as is the other resident reading dogs of Paws to Read.