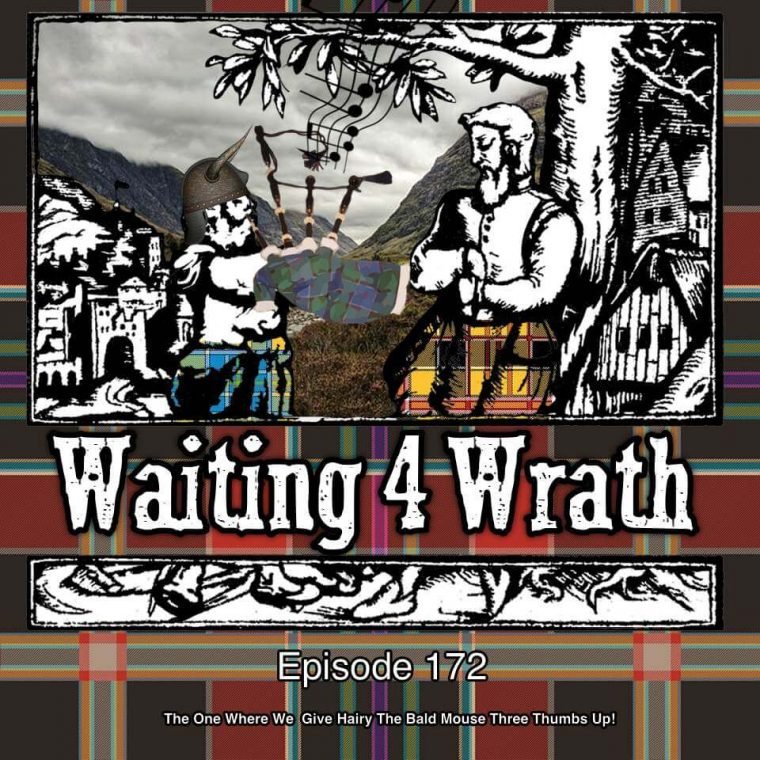 Episode 174 – The One With Scottish Beer Ballads!

In This Week’s Show, episode 174, Jenn and I are back and we’re ready to laugh at the news… if we could just find some that don’t make us want to cry…

Now, grab a beer and help us test the god hypothesis — because, while Pani (the Maori goddess known as ‘the mother of sweet potatoes’) hasn’t struck us down yet, we are trying her patience!

This week I learned that if a homeschooling mom is talking to herself you can just consider it a parent-teacher conference.

Did you know that Pani means ‘besmeared’ in the Maori language? She taught the humans the sacred incantations regarding kumara (or sweet potato). Plantations of sweet potatoes were called “The Stomach of Pani.” There’s a theme here.

Here is my drunk message and vocal stylings. Kinda long, sorry about that. And I had to split it into multiple acts cuz I kept having to do retakes when I drunkenly forgot the lyrics. Also please ask Aaron what part of Canada I sound like I’m from, everyone always tells me my Michigan accent turns Canadian when I’m drinking.

You sound like you’re from the best pubs in town mate!
~ Aaron

Infowars has two strikes on YouTube. One more within three months and it’s off the service forever. Here’s to hoping the moron can’t keep his mouth shut. Jones said on March 3 that he’s already been banned, but YouTube said that isn’t true. In the meantime advertisers flee…http://bit.ly/2Dalthp

Headlines ran uber long this week because we were uber silly. The third made the public show but if you want to find out about Southern Marriage and Aborting Legislators you should visit http://patreon.com/w4w and give us a buck! Or head over to https://WyoAIDS.org and make a donation mentioning the show and we’ll send you this and a few other patron editions of the show. Maybe not the best door-prize, but you’ll be helping people in need, which is, according to 13 out of 10 Doctors, it’s own reward!

Let’s not forget that, with all the attention on Florida Man, Florida Woman is also insane.

Huffington Post apparently broke this story, with an exclusive write-up that was posted on Saturday. Apparently, Dayanna has been secretly hosting the white nationalist podcast “Unapologetic” under the pseudonym “Tiana Dalichov” and bragging about teaching her views in a public school. Because every moron was an internet connection hosts a podcast these days. I mean…

In a podcast from Feb. 26, she interviewed a guest who complained about diversity in schools and dismissed the idea that a “kid from Nigeria and a kid who came from Sweden are supposed to learn exactly the same” and have the “same IQ.” Volitich agreed and argued that “science” has proven some races are more intelligent than others.

In that same podcast, Volitich, who AGAIN teaches social studies to middle schoolers, bragged about spouting her racist beliefs at the school and hiding her repugnant views from other teachers, administration, and parents. But not the students.

Possibly the most disturbing part of the HuffPost’s revelations is that Volitch was consciously indoctrinating her students. As the article notes, the middle school social studies teacher say her students knew her political beliefs and even helped “play along” with administrators to help hide them. From another of her podcasts:

“I told the kids that. I said guys when they are in here I’m going to be different than I usually am. I just don’t want you to be shocked, I want you to play along and they’re like OK. OK.”

Later in the podcast, after Volitich’s guest asks her if the kids ever told their parents what they learn in class, she confirms that the principal once followed up with her over an e-mail a parent had sent. “I had one at the beginning of this year who emailed the principal over my head and basically told her I’m worried that your teacher is injecting political bias into her teaching. And the principal came to me and she was like I’m not worried, should I be worried? And I was like no. And she believed me and she backed off.” The principal is now being investigated to see if appropriate measures were taken to actually follow up with the complaint. (Side note of interest: the school she teaches at, hopefully not for any longer, is 90% white.)

In addition to the podcast, her alter ego Tiana Dalichov, also has quite the online presence. She is an avid online supporter of several anti-semitic leaders and ‘celebrities’ like Kevin McDonald and Mark Collett, and she has shared and re-tweeted gems from long-time racist melanoma David Duke. Oh, she’s also quoted everyone’s favorite Nazi punching bag, Richard Spencer.

She obviously is/was not too worried about being exposed as she uses her own picture as the avatar for Tiana. Or she’s stupid.

Striking teachers go out of their way to make sure students have food – http://on.today.com/2H3pvum

When teachers at Beckley Elementary in West Virginia considered going on strike, they worried their students would go to bed hungry. About 300 of the school’s 430 students rely on the free breakfast and lunch programs and a closed school meant many would have rumbling bellies.

“One of our biggest worries … was our kids getting fed,” Patrick Williams, a social worker at Beckley Elementary, told TODAY. “We truly honestly care about our kids.”

Before the statewide teacher strike in West Virginia, Williams and his colleagues brainstormed about how to feed their students during it. In a faculty meeting, they pooled money to purchase pizzas, fruit, and water. They set the first free lunch at a local grocery store on the second day of the strike, last Friday. When the local Sam’s Club and Little Caesar’s Pizza learned of it, they also donated items.

“A lot of our students depend on school breakfast and lunch as some of their most consistent meals,” Jennifer Wood, from the West Virginia American Federation of Teachers, told TODAY. “Our teachers wouldn’t feel comfortable if their students weren’t taken care of.”

As the strike lingered, teachers continued finding ways to feed their students. On Monday, Williams and his colleagues made snack bags, with nonperishable foods, such as ramen noodles, mac and cheese and ravioli, which they delivered to their students. Observing the children’s reaction made the effort worth it.

“It was really about seeing those kids smile,” Williams said. “It was pretty fulfilling.”

School resumes tomorrow after Gov. Jim Justice promised school employees a 5 percent raise. West Virginia teachers are some of the lowest paid, ranking at 48th in the United States.