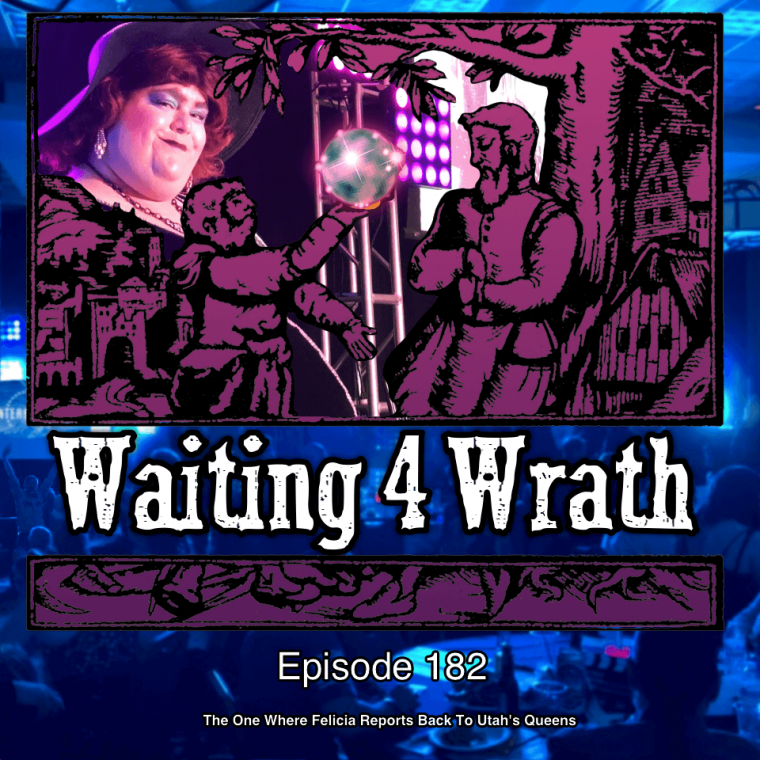 In This Week’s Show, episode 182, we’re back from drag queen bingo, it was a fantastic night and I’m pretty sure I’m dying.

May the Force Be With You!

Now, grab a beer and help us test the god hypothesis — because, while Ishikori-dome (the transgender Shinto spirit of mirrors ) hasn’t struck us down yet, we are trying her patience!

This week I learned that Wookies live to be around 400 years old so basically Han Solo is Chewies 3rd dog. On a side note, had Chewie gotten Han neutered he would have lived longer.

Did you know that, according to Japanese mythology, homosexuality was introduced to the world by Shinu No Hafuri and his lover, Ama No Hafuri? They were servants of the sun goddess, Amataseru and probably had no limit of adorable, quirky nicknames.

Felicia – Utah Outcasts!
Check out Felicia and the Utah Outcasts at http://utahoutcasts.com
They’re great folks and totally deserve a click – if only because she put with us all weekend and didn’t murder Shea!

In better news Drag Queen Bingo was a blast, we’ll have more on that later in the show.

For now, we need to move on to this week’s best people

A HUGE thanks to self-styled ‘humble patron’ Steve who sent us a variety 6-er from The great state of Michigan.

Great show, steered over from Cog Dis. Beer and thought. Much digo

I just listened to Jim and Aaron on cognitive dissonance. A great job! — Eric (stuck in Texas.)

Maple candy isn’t made from sugar sand, I don’t know why I keep saying that…
~A

Big Gay Jim sends his love. He’ll be on soon for official WyoAIDS tallies and rap-ups. For now he, like the rest of us, is mostly just focusing on not barfing all over everything… and unlike the rest of us, is desperately trying to get the glue out of his … everything. Thanks to everyone who helped by donating, sharing, and helping to spread the word! Special thanks to Jaded Zappa, listener extraordinaire and generally amazing person for their generosity!

Finally, you may have noticed a second lady voice – that’s Felicia from Utah Outcasts who came out for Bingo!

Jenn’s got beers from Colorado Springs! I got a chance to hang out with 3 of the hosts from Atheists on High at the Pike’s Peak Brewery.

No, fuck face, your dog can’t get autism from vaccines either, the British Veterinary Association has warned, after the ‘anti-vaccine’ movement spread to pets. Because of assholes in America word-shitting on about the effects of vaccines, Britain has seen upticks in anti-vax pet owners lately too. From 2017 25% of dogs, 35% of cats, and half of the rabbits aren’t vaccinated, a rise from previous years. It’s important to remember that not only are pet anti-vaxxers stupid assholes, they’re also breaking the law because unlike kids, pets legally require at least a rabies shot… because in America, we love literally everything more than our children.

Rwandan God Wants You To Fix His House – http://bit.ly/2IckTpS

The Rwandan government just closed some 6000 decrepit churches and announce it is going to require degrees for Pastors. Apparently, god doesn’t provide for upkeep as a ton of churches are about to fall down, including the 714 in the capital of Kigali. Underscoring god’s contempt for shoddy workmanship, lightning struck one of the churches recently and, as it didn’t have a lightning rod, it killed 16 and injured 140. In an effort to curb the mushrooming shitty-church full of gullible people and a charismatic preacher problem, the government is going to require some kind of licensing… so that assholes in vans with megaphones shouting “Jesus” at people can’t technically be a church anymore.

In honor of our second lady voice, I’ve got a double barrel of Utah to shoot at your ear holes.

First, because Mormons, a University of Utah student has created a space for his peers to cope with the pressures of disappointing heavenly father with shitty exam scores by building Cry Closets. The closets, built from 2×4’s, leftover drywall, and shame, are about 2-foot square rooms you can go into a weep and weep because your over-undies are chafing your sense of self-worth… https://cbsn.ws/2HU1oiE

Continuing a descent into madness so silly as to only be explicable by the Mormon leadership, sexual assault rates at Brigham Young University have traditionally been kept at a nearly national low through a strict policy of blaming the victim. In a surprising — and apparently frustrating to many mo-mo’s — turn of events, it’s walking back on it’s “you’re a whore for being raped” policies and wouldn’t ya know it, reports of sexual assault went up 400%. Seeing the effectiveness of not shit-head based campus safety policies, one can only hope they’ll actually deal with all these assaults now, instead of just tallying up the number of Bibles they need to send out.

Vaccines don’t cause autism, but you can never be too safe with your medical choices. I think without invoking woo we can all agree that a more natural, organic remedy can be favorable to harsh and potentially expensive drugs — especially if you’re in South Africa’s poorer areas. Realizing the obvie health benefits of organically grown and processed pregnant women’s heads, two enterprising men in Mapela village were arrested for harvesting herbs… and a pregnant woman’s head. THere’s no word on what conditions they were trying to treat, other than an acute case of a woman being alive, but both men are now in jail for life.

Won’t someone think of the children?
Or at least count them. Linda Mae was arrested recently in North Carolina’s New Hanover Regional Medical Center for, as she describes it, giving babies bibles! According to Linda, she was doing nothing wrong and was let into the Neonatal ward, wherein she had no babies or business, to give Bibles to infants… because they’re totes mcgoats literate. According to the Hospital staff, however, she tailgated doors opened by legitimate employees until she’d made it past all the security checkpoints, so she could baby shop. No charges were filed, because suspected attempted baby theft is no biggie compared to the awesome power of pretending to give out bibles.

In that’s not how this works news, a man is in jail for getting drunk and helping. Do what you might ask, well according to Ontario Court of Justice Ron Boivin, trying to look after his intoxicated wife… with a winch. Apparently, they’d gone drinking and she’s a might larger than he is, so when she passed out on the lawn and he couldn’t move her, he did want any good husband would do. He took her clothes off, hoping the cold would encourage her to go inside and when it didn’t, he got his ATV and tied a dog leash around her waist and winched her up the stairs. No… when one does this on a lawn, the sidewalk, then a flight of stairs, the winchee usually starts to bleed, and the neighbors usually call the cops. both those things happened.

Remember, an unconscious person doesn’t want a cup of tea… or a winch.

Drink With Us Now Available At https://Patreon.com/W4W

Plus two feel-good stories, one of which is about Jenn! Find out what she thinks about the show and how it’s affected her life at http://patreon.com/w4w!

We wrap up the Laramie Drag Queen Bingo! But that doesn’t mean you should stop donating! Visit https://WyoAIDS.org to make a donation today!

Five female student engineers from U of Florida spent their break traveling to a remote village in the central American country.

“I actually went into engineering with the hopes of helping humanity so to me it was a no-brainer that I would rather go spend my spring break helping a community,” said Kovalenko.

“To know that we made a change, and we were able to bring not just water for the community there that’s existing now, but also for the future,” said Pinto.

They took measurements, dug trenches, installed pipes among other tasks in order to the community access to clean water. Once done, they’d set up a proper drinking water delivery system.

Water was a resource that the villagers were having to hike miles for.

“They can turn on their tap and they have water in every home,” said Broussard.

The entire project cost around $95,000. The funds were raised thanks to the Ponte Vedra Rotary Club, Wisconsin Water for the World and the local village’s government.

Their trip also went beyond engineering water solutions. For many villagers, it was the first time they’d seen female engineers.

“I think we really opened their eyes to what the women in their community can do,” said Broussard.