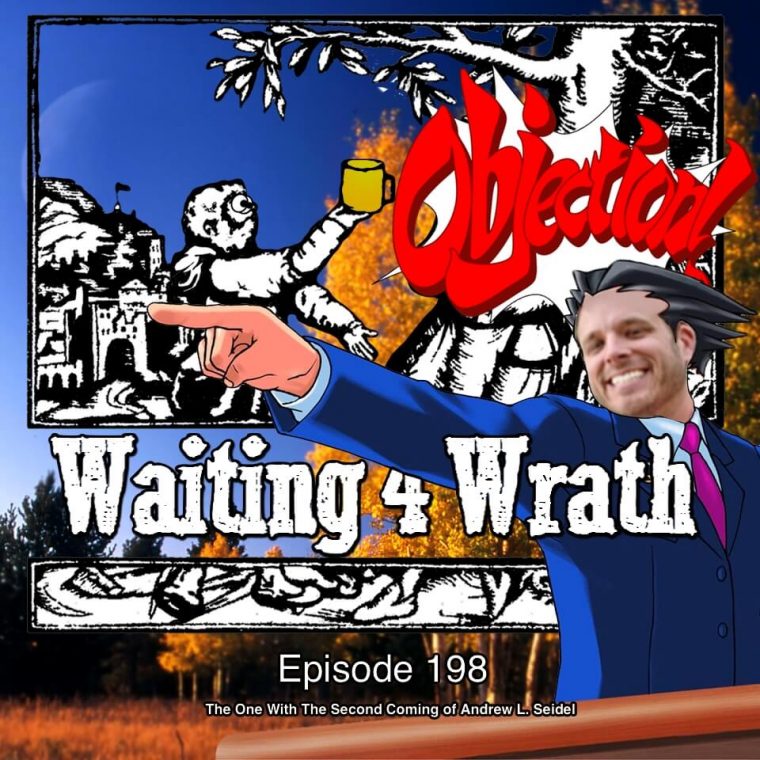 Episode 198 – The One With The Second Coming of Andrew L. Seidel

In This Week’s Show, episode 198, Andrew Seidel joins us to help vanquish nazis from Mars

Now, grab a beer and help us test the god hypothesis — because, while the FFRF hasn’t struck us down yet, we are trying Andrew’s patience!

No Jenn today, she is trying out a new technique called Nyquil and chill. According to her, her palms are sweaty, knees weak, arms are heavy so send reviews to iTunes or stitcher to help her recover.

Discord chat thing on ep 200  – let us know if this is something that you’re interested in. If so, make sure you sign up at http://patreon.com/w4w

A thank you to Timbo slice, who was a big fan of Jenn’s Jones voice, which if you missed you can catch on the EP 196 and 197.

Another big thank you to listener Ross from Hawaii who attempted to get us some island beers but was thwarted once again by the evil postal service.

Aaron – None. Nun of your damn business that’s what!

Kind of a sad story… but also, what the hell were you thinking? Denise Woodrum, 51, is a nun of the Blood of Christ – a sect of vowed Catholic women – pled guilty to hooker boots full of coke. At a difficult part of her life, some online creep called Cornelius had begun flirting with her online. After a bit of time, the e-trist turned into her visiting him in Australia… by way of Texas, South America, Trinidad, and Tobago, then it was off to the Auzie-land, where, unfortunately for her and I assume the drug runners who tricked her, she was arrested because the weird platform heels a stranger gave her were full of fucking cocaine. So, I guess, don’t take random gifts from strangers on a plane, they even have warnings about that on the PA. And, I suppose, if you’re a nun don’t try to hide drugs in stripper boots… they tend to stand out among your other … habits.

Police in Georgia are looking for some crooks who made off with nearly $100,000 worth of Ramen Noodles. My first question I how big was the fucking truck! Deputies in Fayette County say the thieves stole the 53-foot trailer packed with the noodles about two weeks ago, Fox 5 Atlanta reports. The theft is just one of a string of thefts deputies believe are related. The driver of the truck estimated there were $98,000 worth of noodles in the back; if a 48 pack of ramen costs 8 bucks at Sam’s club then the thieves made off with approximately 600,000 packets of the sodium filled noodles. No word on anyone in town is suffering from hyponatremia or salt poisoning.

Recently world-renowned runner of competitions Corey Bellemore ran a competition. He again proved himself worthy of his legendary status by shattering his own world record of a 4:33 mile by a whopping 9 seconds at this year’s event in Vancouver. Unfortunately, his new record was short-lived as officials disqualified him giving the win to British runner Dale Clutterbuck with a time of 4:50 reported Runner’s World, who first covered the “unspecified bottle violation”. “When race officials measured the remaining [beer] in the cans and bottles of the 20 competitors, they found that three runners, including Bellemore, had more than the permitted amount left over.” The penalty for alcohol abuse at the Beer Mile is an extra lap! Sadly, this year’s Beer Mile trophy – and all the glory that comes with it – was just four ounces out of reach. A heart-wrenching loss for people who drink and run, and therefore the world.

Wearing a floral dress and clutching her clipboard, 70-year-old Rosie Henderson knelt down on the asphalt, surrounded by traffic cones and barrier tape. Then, with 11 words, she brought road construction to a halt. “Haro! Haro! Haro! A l’aide mon Prince, on me fait tort.” The Clameur de Haro [klamœʁ də aʁo] is an ancient legal injunction of restraint employed by a person who believes they are being wronged by another at that moment. It survives as a fully enforceable law to this day in the legal systems of Jersey and Guernsey, and is used, albeit infrequently, for matters affecting land. Just like they did a thousand years ago, petitioners follow their call for help by reciting the Lord’s Prayer in Norman French. They then have 24 hours to formally register their concerns in court. In the meantime, the party accused of wrongdoing is barred from taking any further action.
In Henderson’s case, invoking the ancient rite was a last-ditch effort to protest the narrowing of a road, which she believes will endanger both drivers and pedestrians. Her victory was short-lived. According to the Guernsey Press, construction workers were spotted to returning to the site less than two hours after she raised the Clameur de Haro. Later that day, a judge threw out Henderson’s complaint entirely because she doesn’t own the land in question. https://wapo.st/2w9PtsR

Aaron – available now at http://patreon.com/w4w
If only he’d been riding a homeopathic bicycle.
The Queen’s quack, Dr. Fisher…
http://bit.ly/2w5KZ6u

A few weeks ago we mentioned the Unite the Right 2 rally that was “held”- in quotes- in DC August 12. A quick reminder Unite the Right 2, was a follow-up to last year’s disastrous and violent demonstrations in Charlottesville, Virginia. This year it was also a major bust with only about 25 people showing up amidst over a thousand more counter-protesters.

Jason Kessler, the white supremacist rally organizer apparently is struggling with the realization that whitesome isn’t so delightsome.

In a video which was recently thrust into the limelight after being online for a few weeks shows Patrick Little interviewing Kessler. Little is a well-known neo-Nazi who ran as a Republican for the US Senate in California this year with his political platform of the Holocaust “a lie” and claims Jews conspired to stop him from winning a U.S. Senate race.

According to the conversation with Kessler, the legal costs associated with last year’s Unite the Right rally meant that he had to move back in with his parents. We quickly see hear this as the interview progresses.

These new living arrangements seem to not be the best Kessler complains that his parents watch “constant anti-German propaganda” on the History Channel and describes them as “cucked,” a fun derogatory word used but the young far right.

Kessler can at least take some solace in the fact that he is not the only member of the right to have recently had a public dressing-down by a family member. On Monday, David Glosser, the uncle of presidential adviser Stephen Miller, published an essay in Politico calling his nephew a hypocrite.

“I have watched with dismay and increasing horror as my nephew, who is an educated man and well aware of his [Jewish] heritage, has become the architect of immigration policies that repudiate the very foundation of our family’s life in this country,”

Second Half Interview and Chat

This week’s show misses Jenn but is happy to welcome Andrew Seidel back! He joins us to have a talk about Perjury Elf’s new Shock and Awe division. Make sure you check out the FFRF.org (and sign up) and give Andrew a follow at AndrewLSeidel.com

The FFRF does super important work and while the show might be a little more casual about it these days (hey, I said “might” :P ) defending the separation of church and state helps us all, faithful and secular alike. Supporting them is as simple as clicking “Join” at FFRF.org! When Andrew writes a scary legal letter of scariness — or at least that’s what I assume he does all day — one of the things that lend it credence is being able to say that he represents X many people. Our listenership is modest, but if even half of you signed up he’d be estimating a much higher number indeed.

Of course, if we haven’t charity-driven you off a cliff yet with WyoAIDS.org requests the FFRF.org could always use a buck or two and they have membership plans with all manner of benefits starting at just $40 a year.

And no, Andrew didn’t ask us to pimp them, he’s a class act like that. But the FFRF really is a cause we believe in and it’s a fantastic thing to be able to use the platform you all so generously give us to promote good causes.

Thanks for supporting what we do and fighting the good fight!

Welcome, Andrew L. Seidel to the show. FFRF legal expert on all things Constitutional, he’s a photographer, humanist activist, and real soon to be an author!

Welcome back to the show!

When we last spoke… over email, not like, your last visit, Jenn’s not here so we have no idea what we last talked about on air… but when we last corresponded we talked briefly about the administration’s plan to create a special task force to bring Jesus to Mars. Dubbed the Religious Rockus Cocus in Space with Force if my memory serves, Attorney General Jeff Kebler-Sessions is basting off a full frontal assault on those who would see the liberties of the religious to take little green men to task diminished.

I think I’ve summed that up more or less accurately eh?

[Andrew corrects me on literally everything]

Oh, ok. I didn’t know much about this after all. So, let’s talk about the Religious Liberty Task Force and how it will, surely, help to uphold the Establishment clause of the 1st Amendment. I assume helping secular students create SSA’s and Islamic groups break ground on more community centers… that kind of thing.

The Founding Myth: Why Christian Nationalism is Unamerican

Chat for a bit about the progress of the book, where people will be able to find it. etc.

they spotted a man standing on the bridge’s ledge on the other side of the fence.

“Bro, you alright?” Gaebel, the driver of the beer truck, shouted out the window, as Anderson filmed on his phone. “Come on this side, bro.”

“I’m thinking it’s either I help this guy or he’s going to jump,” he later told KMSP. “I gotta keep this guy entertained somehow because if I wait for police, things could be over.”

The first thought that came to his mind was, of all things, Denzel Washington. He recalled the movie “Inside Man,” in which Washington plays a hostage negotiator for the New York Police Department.

“I was like, alright. I gotta be the negotiator,” Anderson told KSTP.

“Do you want to have a drink with me?” Anderson asked. The man paused.

As the officers continued distracting the man, Anderson rushed to the beer truck, grabbing a 12-pack of Coors Light.

He brought the case of beer to the bridge’s ledge, opened it, and told the man that if he climbed down from there, the 12-pack was all his.

The man agreed, slowly retreating to safety, where emergency responders placed him in an ambulance and transported him to a hospital.

“Beer has been bringing people together for a long, long time,” Ernster, the police spokesman, told the Pioneer Press. “Today, it brought people together in a life-saving way.”

Several of Anderson’s friends on Facebook agreed. “Some people just need an ear and a beer,” one person commented.