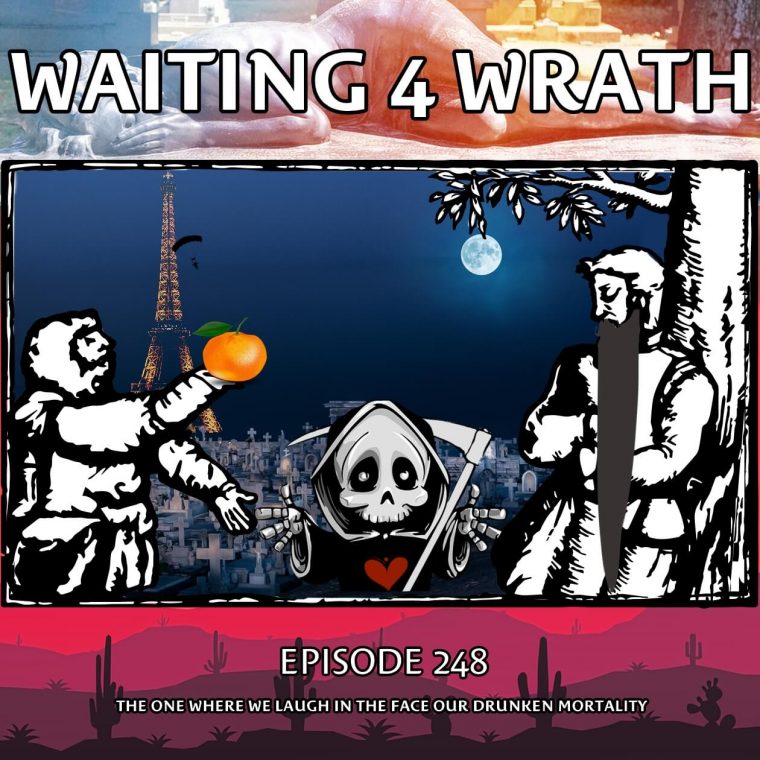 Now, grab a beer and help us test the god hypothesis — because, while Shea’s Birthday hasn’t struck us down yet, we are trying his patience!

This week I learned that if you glue a dead wasp to the back of your hand you can smack anyone as hard as possible and act like you saved them.

Died of dysentery, fording a river?

While researching people’s proof of the afterlife and delving into full on craziness (did you know Goop believes in psy powers) I realized I needed more time to pull all the parts together so prepare yourselves for that in the future. As a happy kismet I ran into quite a few people dying in incredibly strange and bizarre ways. So today I’m going to bring you through history and teach you of some strange, weird as shit deaths.

We’re gonna travel to ancient Greece to learn about the father of tragedy, Aeschylus. Way back, like 500 years before Jesus mucked around, Aeschylus was an incredibly popular playwright known for his dialog and conflict between actors. During his life it was prophesied that he would be killed by a falling object and many believe that because of that, Aeschylus made it a habit to stay out of doors. During a trip to Sicily in 458 BC he was struck on the head by a tortoise dropped by an eagle which had mistaken his bald head for a rock, as written by Valerius Maximus, a collector of historical information. Aeschylus’s work was so respected by the Athenians that after his death, his were the only tragedies allowed to be restaged in subsequent competitions.

You have probably heard of Draconian law, excessively harsh and severe punishments, but you may not know that they were originally laws created in Greece as the first constitution of Athens back around 620 BC. These laws were written by… you guessed it, Draco. Draco was the first recorded legislator of Athens in Ancient Greece. While visiting an Aeginetan theatre supporters of his, in a traditional ancient Greek show of approval,”threw so many hats and shirts and cloaks on his head that he suffocated, and was buried in that same theatre”. The truth about his death is still unclear, but I’d like to believe it’s true.

Empedocles, another Greek philosopher, also a statesman, poet, religious teacher, and physiologist. According to legend, Empedocles was a self-styled god he believed in the transmigration of souls, he declared that those who have sinned must wander for 30,000 seasons through many mortal bodies and be tossed from one of the four elements to another. Escape from such punishment requires purification, particularly abstention from the flesh of animals, whose souls may once have inhabited human bodies. To show his divinity and divine power he climbed up to the top of Mount Etna, an active volcano, and threw himself in. Miraculously living and being vwooped up to his heavenly throne… oh wait, no, he died. He was greatly morned, Aristotle reputedly hailed him as the inventor of rhetoric, and Galen regarded him as the founder of Italian medicine. Lucretius admired his hexametric poetry. Nothing remains of the various writings attributed to him other than 400 lines from his poem Peri physeōs (“On Nature”) and fewer than 100 verses from his poem Katharmoi (“Purifications”).

Let’s move forward in time a bit, it’s not just the Greeks that die in fun ways.

The little town of Braunau am Inn, Austria is most often remembered for what Steve? as the birthplace of Adolf Hitler. But for today we are going to focus on another of their notable residents, former Mayor Hans Steininger. Good ol Hans was the mayor way back in 1567, not much is known about him other than he was well liked and he had some very impressive facial hair. Hans had a four and a half foot long beard that hung like a tentacle from his face. Normally he would keep his beard rolled up and tucked in his pocket, he didn’t wanna trip on it, I mean it must have taken years to grow. Unfortunately one fateful day, Sept 28, 1567, a large fire broke out in town and in the commotion Hand’s beard slipped from his pocket, not worrying much he went to help his people escape and on the top of a flight of stairs he tripped on his great beard and fell down the stairs, breaking his neck. Upon his death, the city erected a monument to their fallen mayor on the side of St. Stephen’s Church, so that his legacy could never be forgotten. Then, because the beard must live on, the townspeople cut off Hans Steininger’s beautiful beard and locked it in a long glass case in the town’s museum, ensuring that all of the years he’d spent growing it were not in vain.

Thomas Urquhart in his own words revolutionised trigonometry, participated in a battle that started a war, traced his family history back to Adam and Eve and invented a Universal Language never dreamed of since the Tower of Babel. In real life he was a Scottish aristocrat, writer, and translator. He is best known for his translation of the works of French Renaissance writer François Rabelais to English. Always known as an eccentric he lived comfortably In a manner much like Baron munchausen I’d imagine. After hearing the news that Charles II had been returned to the throne died in a fit of laughter in 1660.

Franz Reichelt was an Austrian-born French tailor, inventor and parachuting pioneer, now sometimes referred to as the Flying Tailor. Not to be confused with the flying nun who was around much later. Reichelt had become fixated on developing a suit for aviators that would convert into a parachute and allow them to survive a fall should they be forced to leave their aircraft. Franz’s first experiments were conducted with dummies dropped from the fifth floor of his apartment building and been successful, but he was unable to replicate those early successes with any of his subsequent designs. Believing that a suitably high test platform would prove his invention’s effectiveness, Reichelt repeatedly petitioned the Parisian Police for permission to test from the Eiffel Tower. He finally received permission in 1912, but when he arrived at the tower on 4 February he made it clear that he intended to jump personally rather than conduct an experiment with dummies. Despite attempts to dissuade him, he jumped from the first platform of the tower wearing his invention. The parachute failed to deploy and he fell 187 freedom units to his death.

Bobby Leach was the ultimate daredevil. He was the second man to go over Niagara Falls in a metal barrel. He performed many other terrifying stunts such as swimming in whirlpool rapids. However his outrageous stunts would not keep him from the dangers of slipping. In 1926 while walking down the road, Bobby slipped on an orange peel. The fall caused him to injure his leg and caused it to become infected with gangrene, killing him shortly after.

2012 Wealthy businessman Uroko Onoja from Nigeria had what many might say the perfect death. Uroko was not only successful in business but also successful in love, with proof of six wives. Yeah, six. Unluckily for Uroko he was caught spending a bit more time with his youngest sixth wife. Uroko’s five other wives caught him having sex with her and decided they wanted some too, after threatening him with knives and sticks he managed to satiate 4 more of his wives before he stopped breathing as his sixth climbed into bed. No word on whether or not they were able to close the coffin.

In a true red dead redemption in 2017 a Russian welder stuffed a fire extinguisher down the barrel of a decommissioned artillery howitzer. He decided to put to use his training in the elemental powers of hot plasma, he then charged the cannon with calcium carbide and water, a reactive combination that produces acetylene welding gas… The abused fire extinguisher exploded from the howitzer cannon, and pieces of the payload brained the welder–whose head was conveniently located in the ballistic trajectory of the shrapnel. In a fight between shrapnel and an empty skull, shrapnel wins.

This year an un-named man illegally crept into a national park in South Africa with murder in mind, for there is money to be made from a rhino’s horn and therefore poachers hunt and kill these big, beautiful animals. Accomplice poachers told the victim’s family that he had been killed by an elephant. A search party struggled to find the body but eventually found a human skull and a pair of trousers, marks on the skull indicated his body had been eaten by lions. So this dumb ass poacher got wha was coming for him, trampled by elephants then eaten by lions, thats some biblical shit right there. 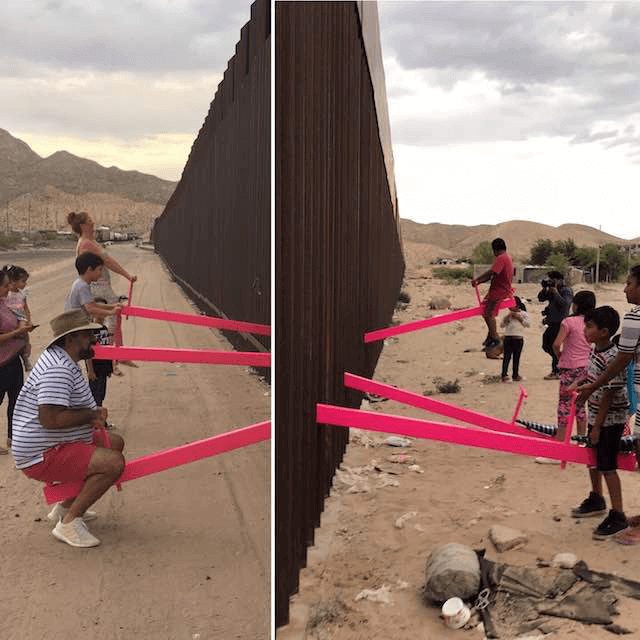