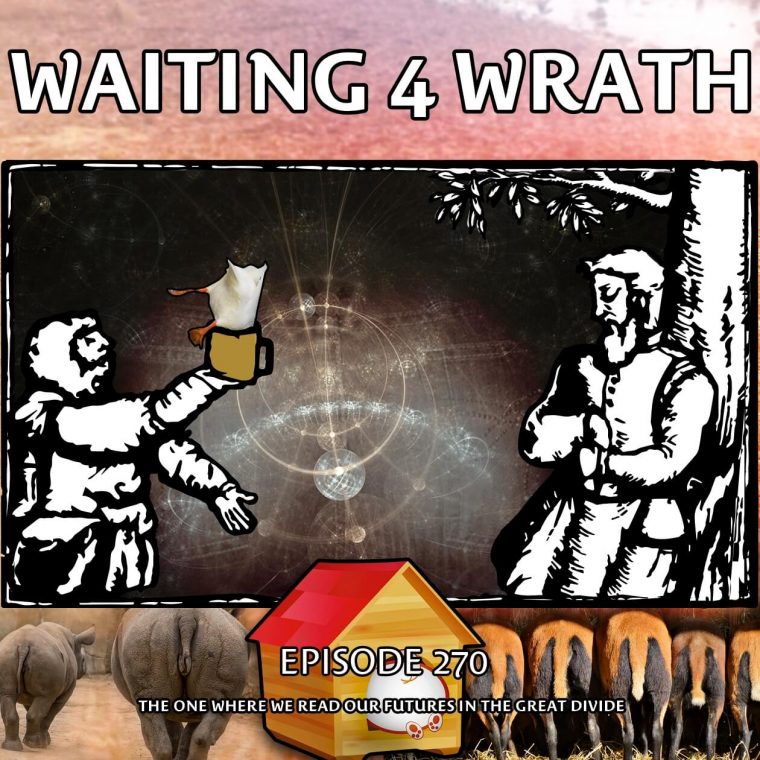 In This Week’s Show, episode 270, we sit down and hold onto our asses for king, country, and the promise of beers yet to come!

Now, grab a beer and help us test the god hypothesis — because, while Kim Kardashian’s arse hasn’t struck us down yet, we are trying its patience!

This week I learned that your customer service voice is just baby talk for boomers.

4MB recording on Sunday Jan. 12th watch the socials or your inbox for a patron link!

“We have companies with a lot of money backing us, you are nobody; we are going to fry you with legal sues”

That was the threat to sue them to oblivion that the Spanish National Homeopaths Assembly used to harass the Spanish Association to Protect the Sick against Pseudoscientific Therapies and they have now sued them for damaging their public image and APETP is asking for help with the legal costs: https://www.gofundme.com/f/defensa-contra-hostigamiento-jud…
APETP had a hand advising the Spanish health ministry in the creation of the list of techniques officially designated as pseudo-therapies: https://elpais.com/…/02/28/actualidad/1551356928_946157.html
And they are also promoting an EU manifesto agains pseudosciences https://pseudoscience-manifesto.apetp.com/
Share if you can… Lets see if we can pull it up like in Britt Marie Hermes case

Boston based psychic Tracy Milanovich didn’t see it coming when she was arrested last week. Ms. Milanovich stole $71,000 after convincing a mother that her daughter was possessed by demons, cops said. She did this by telling mom her daughter was “dead in God’s eyes” and had “something inside of her that was bad.”I feel like these are the same ways anti vaxxers tell if your kids have been inoculated. The Somerset PD said that Milanovich, 37, had been charging the woman in exchange for exorcising the demon. In addition to the cash, Milanovich is also accused of getting the victim to buy household items for her, such as bedding and towels. Because reasons, I guess.

The victim/best customer ever told police that she initially paid $1,000 cash in November for a “‘Candle Lighting’ for the past, present, and future, to keep her daughter free from demons that are in her,” according to the filing. Well I feel like that didn’t work at all.

Days later, Milanovich told the woman that the demons were worse than she originally thought and asked her to bring her nine towels, 10 rolls of paper towels, two sets of bed sheets, and one jar of water. The mother would later bring her several other items as well, including a Barbie doll that Milanovich said she would transfer the demon into. Mattel makes the best vessels. Apparently in order to save the young girls soul, the victim would have to “purchase her daughter’s soul back.” I should also probably mention that the victim was told not to tell anyone about the exorcism or else the spirits would find out and it wouldn’t work. Sounds very legit to me.

During one session Milanovich told the mother that a “previous payment of $6,058 had only cleaned half of her daughter” and that that same amount was needed to rid her of the remaining spirit. Also she wanted the towels in a different color and higher thread count sheets. Luckily after lots of perseverance and hard work/money and literally nothing else Milanovich told the victim “the demon was strong but (she) found a way to banish it.” At this point, Mom had shelled out over $60,000 to “cure” her daughter. Milanovich then looked her gift horse in the mouth and requested $14,000 to “create a block on her daughter” to protect her from spirits forever. Mom had had enough and her and her husband reported the scheme to police.

Milanovich was ultimately arrested Dec. 27 on a warrant and charged with six counts of obtaining property over $250 by trick, one count of larceny over $1,200, and one count of intimidation of a witness. In an interview with police, Milanovich said she performed five personal readings and approximately 10 telephone readings for the woman, according to the report. She said she charged the woman no more than $1,000 total.

“Milanovich said that she has been nothing but helpful for (the woman),” a police report says, adding that Milanovich said “she was in shock over the allegations, and was concerned about her business reputation.”

This weeks story I couldn’t tell if Jenn was here 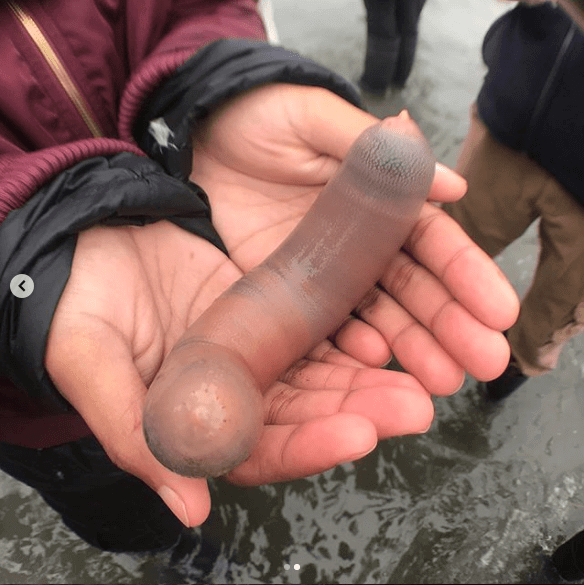 From Bay Nature Magazine’s twitter “Thousands of these marine worms—called fat innkeeper worms, or “penis fish”—were found on Drake’s Beach last week! These phallic organisms are quite common along the West coast of North America, but they spend their whole lives in U-shaped burrows under the sand, so few beachgoers are aware of their existence. A recent storm in Northern California brought strong waves that washed away several feet of sand from the intertidal zone, leaving all these fat innkeeper worms exposed on the surface. Next time you go to the beach, just think about the hundreds of 10-inch, pink sausages wiggling around just a few feet under the sand.”

So. This week we’re going to have to pull up our big-boy comedy pants and drag our asses to the finish line.

Because this one is real dumb.

Have you ever Googled something and found out that it was way more real than you wanted it to be?

What do they have in common?

The term itself, according to wikipedia — where I found this and then couldn’t escape it — is a neologism. According to site that’s totally trustworthy probably occult-world.com, it’s derived from the English rump (‘firmament’) and Greek logia (‘study’) used to describe the practice of reading butts.

The study itself allows one, with practice, to divine a butts owner’s character, fortunes, and future through careful analysis of the lines, crevices, dimples, and folds. Science!

According to Jacqueline Stallone — yep, that Stallone — Rumpology dates back to ancient Babylon, India, Greece, and Rome. In the latter two, apparently, it was believed that the butt was the key to health and fidelity.

According to the internet, she made it up.

This is serious business! And business is good. For a mere $600 and a grainy, low-res, photo of your ass (because graphology) Sylvester Stallone’s mom will tell you your future… and send you an 8 1/2 x 11″ print out of your butt.

All thanks to the wonders of modern technology don’t’cha know. Apparently, back in the day, they used to cover your ass in henna ink and have you sit on a placemat to leave a readable impression. Given that’s how it works – Jackie calls ass-pics “positive” image. Because… reasons. Also I’m sure that means something, but those details are not available to the likes of us

She’s good at it too, she has claimed to predict the outcome of Presidential elections and Oscar awards by reading the bottoms of her two pet Doberman Pinschers… according to a Salon article about Barbara Streisand overhearing her call it for ol’ G. W. Bush.

But I know what you’re thinking… what about the crack?

Well, the gluteal cleft – proper terminology, thank you – tells a story. Per Jackie the crack is “more than an advertising sign for plumbers, teens, and non-conformists. IT HAS REAL SIGNIFICANCE.

“It is a natural part of the human body and of vital importance. It represents the division between the ying/yang, good/bad, light/darkness, between your past–the left cheek and your future — the right cheek.

I have noticed in my years of rumpology reading that it often has characteristics of personality. Many bankers cleft’s are very short; while lawyers are very long. It can vary in width — with politician’s seemingly extra wide and cop’s notoriously narrow. Have you had a look in the mirror recently at yours?”

And she knows her shit y’all, she’s the Dean of the University of Astrology. The University! (Also, don’t go to that site, I’m pretty sure it has auto-playing music… Safari blocked so much stuff… so much)

Anyway, we’re not here to talk about the weird butt stuff Rambo’s mom does.

José Miranda, a student of Jackie’s who is a soothsayer in Little Havana with a few TV credits, says rumpreading is “no different than reading a palm or someone’s eyes.” Which is true I suppose… it is indeed no different than astrology, cartomancy (Terot cards etc), palm reading, or getting messages from ghosts.

Well, hopefully not too like one hopes, especially of Ulf Buck is doing the reading. Because Ulf is blind and cold hands aren’t fun. The Rumpreader from Meldorf, Germany tells peoples futures by carefully feeling their butts.

From skeptic.com by way of an interview in Tattersall, 2003, Buck says that rumps “have lines like those on the palm of the hand, which can be read to reveal much about character and destiny. An apple-shaped, muscular bottom indicates someone who is charismatic, dynamic, very confident and often creative. A person who enjoys life. A pear-shaped bottom suggests someone very steadfast, patient and down-to-earth.”

So now that we know what invaluable knowledge we’re sitting on… how does one read a butt? Perhaps more worrisome, is Karl’s rather on the nose question

“here’s the question then, who maketh the man here? Am I in charge or is my arse in charge”?

Well, if you want to know the secret truths of tushy, first of all you need to practice interpersonal communication. Specifically giving a client information that could be seen as meaningful or significant and could only be known through reading their palms… I mean stars… I mean Tarot cards… I mean… shit… Butts! 12

Skepdic.com has a complete write called Rumpology for Dummies that you should check out for a complete tutorial. But in summation:

Next Week’s Beer from travis

“It can be an utterly heartbreaking job. But I just can’t bear the thought of them spending their final moments without the love they deserve.” Coyle explained.

“We’ll also take them down to the local pub – it’s really dog-friendly, and they’ll get a steak dinner too. Many have not led a very nice life too, used for breeding or guard dogs, so when they’ve become unwell, they’re not useful anymore and left.” Coyle said about making the rest of their lives as amazing as possible.

She also accepts donations via Paypal over at the Grey Muzzle Canine Hospice Project! She hosts fundraisers on her Facebook page to help support these special dogs in their final days.

See their site for doggie pics and a donation link: https://www.facebook.com/thegreymuzzlecaninehospice/

Model raises more than $750,000 for Aussie bushfire relief by sending nudes to donors

And a quick mention of an awesome lady with awesome boobies raised an awesome amount of money (750k) for the Australian wildfires. If you want to help our upside down friends finally deal with that spider problem you can make a fire fighting donation at the link in the show notes… and/or vote democrat…