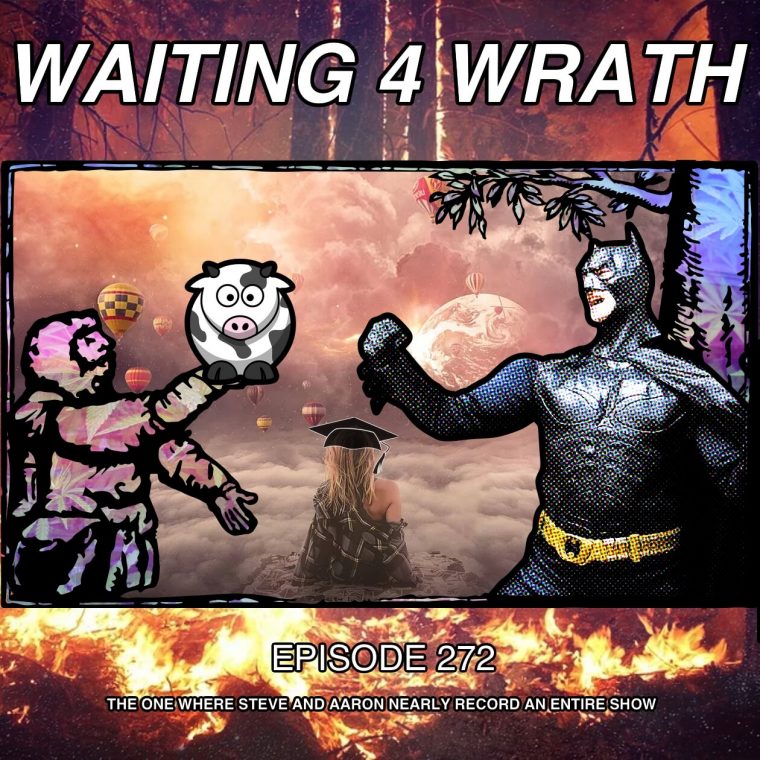 In This Week’s Show, episode 272, Steve and Aaron record a buddy-show, because our other buddies bailed on us…

Now, grab a beer and help us test the god hypothesis — because, while Haribo hasn’t struck us down yet, we are trying it’s gummy-patience!

Dance a jig for Sheaster who couldn’t be here.

Sing a song for sicky.

Quick note from Jenn: “I apologize if parts of my cavern story were unclear, but history seems to agree that Kincaid and Jordan were made up, so no one try to find Kincaid’s first white man life history in Idaho.”

Don’t be a Dick… Grayson.

Hear about it now — and get yesterday’s new 4 More Beers — right now at http://patreon.com/w4w

DC fans will know what I’m talking about. Holy massive-mullet Batman! Also he’s kind of a douche. Young Justice gave him a more worthy… until season 3 that is… demeanor but from the start Dick has been… well… a dick. Even back in the golden ear (not technically) of Batman live with Adam West, Dick had penis problems.

Burt Ward, who played Dick in 1966, was recently interviewed because of a Hollywood Walk of Fame star and of course, the subject was dick. Not the one he portrayed, the one he tried to hide. His dick. Apparently, back in the day, ABC was worried that Robin’s tighty-geeny bulge would get the show censored. Bruce’s young ward wore overly snug briefs which drew the ire of the Catholic League of Decency. I can only assume they were outraged that someone would praid so much young hero meat before them without giving them access to the millionaires cave of secrets, so to speak. “They thought that Robin had a very large bulge for television,” the actor said in an interview with Page Six. As Ward tells it, the issue became such a concern for ABC that the network had him go see a doctor, who prescribed pills “to shrink me up.”

Apparently he reluctantly took them for about 3 days before realizing they would probably sterilize him. So he stopped. “I stopped doing that and I just used my cape to cover it.” Which is why Robin is so awkwardly holding his cape in front of, what I had always just assumed was a Yavon Craig induced boner.

Following the show Burt saved us all the trauma of giving life to Dick’s angst-ridden Titan years. Because, you know, “fuck Batman” and all.

Aaron, do you have a stock portfolio and if so, do you follow professional stock “experts” for recommendations? I personally only have some indexed investments so I don’t spend a ton of time on keeping close track and this story shows that may very well be a reasonable approach.

This is a bit dated since it happened in 2016, but still germane today. A Norwegian TV program decided to do three month comparison of several different stock pickers and the shittiest results didn’t come from the actual shit. I’ll explain. They set up a little competition where they pitted a pair of professional stock pickers against an astrologist, a pair of beauty bloggers and a cow shitting in a field. That’s right a cow shitting in a field. They marked out a grid of potential stocks and followed the ones the cow shit on. They were each given 10K Kroner to invest in Olso-listed stocks.

After three months, the results were in and (drum roll please), the astrologer did the worst, underperforming the Norwegian stock market. In next place was… the professional stock pickers and the cow shit. They were all trounced by the beauty bloggers who managed a 10% return despite not knowing any of the companies involved.

The real twist though were the presenters who showed that their portfolio beat the pants off of all the rest, sort of. What they really did was assemble 20 different portfolios but only showed the results of the one that did the best. This was to illustrate survivorship bias, which wikipedia defines as: logical error of concentrating on the people or things that made it past some selection process and overlooking those that did not, typically because of their lack of visibility. This can lead to false conclusions in several different ways.

That’s all well and interesting, but the real winner is the cow named Gullros who shit herself to fame. The takeaway for most of us is simply to forget about trying to beat the market and stick to cheap, index tracking funds.

It seems that Liberty University, that stalwart of fine academic rigor, has started a new “think tank” called the Falkirk Center, which they profess is named after the battle of Falkirk where William Wallace got his ass kicked by King Edwards forces, when in reality is ego-named after Jerry Falwell Jr. and Charlie Kirk.

Okay first of all, Puke!

The web page (that’s right a single page), starts with a bunch of whining about losing the battle against “anti-christian, anti-American sentiment to basically all of the country (Hollywood, academia, corps, govt.,special interest groups, mainstream media). These poor, poor trod-upon little bitches.

“Bemoaning the rise of leftism is no longer enough. Turning the other cheek in our personal relationships with our neighbors as Jesus taught, while abdicating our responsibilities on the cultural battlefield is not sufficient. There is too much at stake in the battle for the soul of our nation. Bold, unapologetic action and initiative is needed, which is why we just launched the Falkirk Center, a think tank dedicated to restoring and defending American ideals and Judeo-Christian values in all aspects of life.”

Okay then, so they are willing to (openly) go against their lord and savior Jesus Christ’s teachings in order to be a more more forcefully against the evil, family-destroying, ooh-gross, gay people of the world. Their screed is really just a word salad of the same old, tired, ‘woe is me, the world is changing and I can’t take it’, people are abandoning their traditional christian values, secularism is killing everybody, typical sheep bleating, bullshit.

It seems that this new endeavor’s real goal is just to raise money from gullible morons.

Apparently the indigenous Australians were digging out irrigation long before Rome… or even the pyramids for that matter.

After the wildfires ravaged the state of Victoria, which they did with gusto – donations can be made in the show notes – the thick vegetation was consumed revealing an amazing irrigation system.

The Budj Bim Cultural Landscape, consisting of channels, weirs (think beaver dam) and dams built from volcanic rock is one of the world’s most extensive and oldest aquaculture systems according to UNESCO.

It seems it was built about 6,600 years ago by the Gunditjmara people.

UNESCO’s World Heritage List has known about the aquifer for a little while, it was made a heritage site in July, but the fires have revealed that the system is much, much larger than previously thought. “When we returned to the area, we found a channel hidden in the grass and other vegetation. It was about 25 meters (82 feet) in length, which was a fairly substantial size,” Denis Rose, project manager at the non-profit group Gunditj Mirring Traditional Owners Aboriginal Corporation said.

More information about the find can be found on the Aboriginal Corporation’s website. “The Budj Bim Cultural Landscape bears an exceptional testimony to the cultural traditions, knowledge, practices and ingenuity of the Gunditjmara,” it said.

The fire near the national park was caused by a lightning strike in late December, which eventually spread to some 790 hectares (3 square miles) in size, said Mark Mellington, district manager for Forest Fire Management Victoria.

The Gunditjmara were one of the indigenous groups who thrived before European criminals showed up. Apparently, the population was well into the thousands before the 1800’s which it sharply declined.

“Over the next few weeks, we are hoping to conduct a comprehensive cultural heritage survey to check areas that were not previously recorded,” he said. “It’s important because it provided a rich, sustainable life for the traditional people, and has continued to be an important part of our cultural life.”

So there ya go, there at least some silver lining.

The Oregon Office of Economic Analysis recently did an analysis (makes sense) of cannabis sales statewide. In a result that is not at all surprising, they learned that sales in dispensaries along the Idaho border are higher than sales from comparable stores farther from the Idaho border (considering that Oregon’s other bordering states of California, Nevada, and Washington also have legal cannabis markets).

This is known as the border effect, which is when two neighboring jurisdiction have different rules and residents use these differences by traveling to whichever neighbor offers them the best advantage (think buying groceries in the state with the lowest sales tax). Now, none of this is surprising in the slightest. Of course the cannabis stores near a state without legal sales will be busier than those more distant, but I was saving the best (funniest) bit for now. The sales are not only larger along the border, but the study found that they are 420 times higher (that’s right, higher). The same effect is seen in Washington regarding sales near the Idaho border too.

This shows that Idaho, like Wyoming (and 12 other states) are losing what I can only assume is a metric buttload of money to states which have legalized the use of a plant that’s never directly caused a death.

“988 has an echo of the 911 number we all know as an emergency number,” said FCC Chairman Ajit Pai during the commission’s open December meeting. “We believe that this three-digit number dedicated for this purpose will help ease access to crisis services, it will reduce the stigma surrounding suicide and mental health conditions, and ultimately it will save lives.”

The report was created in response to the National Suicide Hotline Improvement Act of 2018, which was approved in the House in a near unanimous 379-1 vote back in July 2018. It was then signed into effect by President Donald Trump the following month.

“We all know by heart to dial 911 during an emergency. We have fate and confidence that somebody who can help will be on the line. It shouldn’t be any different for someone in a mental health crisis,” said Rep. Leonard Lance (R-NJ) in support of the bill.

Until the hotline is launched, Americans suffering from suicidal impulses are encouraged to call the official suicide hotline: 1-800-273-8255