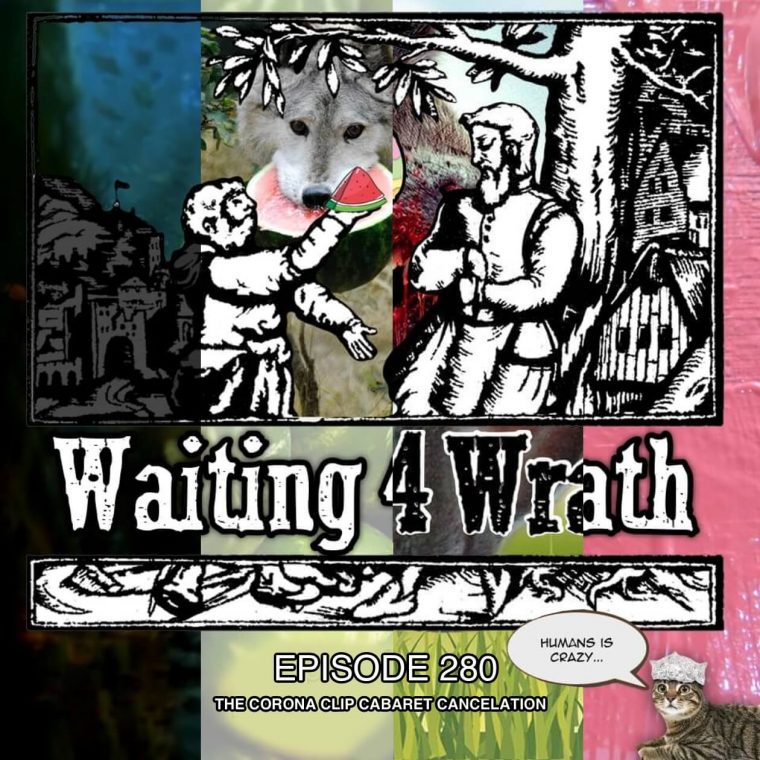 In This Week’s Show, episode 280, we’re all in hiding so today’s show is a bit of chatter and a few of our favorite clips!

Now, grab a beer and help us test the god hypothesis — because, while Shit Happens (again) we are tempting fate!

This week I learned that astronauts on the ISS are feeling pretty cocky right now.

First, a bit about today’s show. Because of the outbreak and various quarantine measures, we’re meeting only briefly to record a few introductory segments. We’ll be running some of our favorite bits from roughly, episodes 150 to 200-ish. Please enjoy!

More importantly, the round table is a bit of a different animal this week — it’s for-serious announcement time!

I’ll brief you on the details and then we’ll kind of chat about the why and our thoughts. Without further ado, it’s time to rip the band-aid off — we’re ending the show. But before anyone has time for a spit take, I want everyone to rest assured that like a bad STD, we’re not that easy to get rid of.

We’ll be back with a new show in short order and you’ll even get the first few episodes on this feed so you can have a test listen, get the pertinent info, and switch to the new feed and new patreon account – wink wink, nudge nudge.

We’re ending W4W because it doesn’t necessarily fit with what we want to do anymore. We started this as another entry into the “angry, dirty joke-telling, atheist rant” space and that was a lot of fun for a long while. I for one needed to get some stuff off my chest and this made for a great outlet. More importantly, we had a lot of fun, met a bunch of great people online and IRL, and managed to raise a not-insignificant amount of money for WyoAIDS. All of which I’m calling a fantastic success.

That said, in the last year it’s become increasingly difficult to organize recordings, finding stories and doing the “homework” of the show has felt like exactly that, homework. The switch to the new format, which if we’re honest Jenn spearheaded nearly 150 episodes ago, has been a breath of fresh air. I think we’ve all enjoyed the change from rage to whimsey. From terrible people to tantalizing trivia. And most importantly, from poop jokes to… well… less and less of that.

So with that in mind, I’m happy to announce that we’ll soon air the first episodes of Interesting, If True. This show will be a bit shorter than W4W with tighter editing, less over talk, fewer 12-year-old jokes, and a whole lot more interesting content.

Basically, think of our second halves of late as their own show and you’ve got the idea.

Those of you supporting the show will find that you still get additional content from IIT. And if you’ve sent us beer, fear not, we’ll be continuing that tradition as well, if a little less formally — the plan is to enjoy a beer during the opening, comment on it, and then move quickly onto the meat of the show rather than having a dedicated beer review segment.

The final product will be a significantly lighter-hearted show that we hope will still be as fun, humorous, and yes, occasionally irreverent. But not so-much-so that you don’t want to share it on Facebook or tell your weird aunt or co-worker about it.

And that’s really the goal: to continue to have fun, make people laugh, and this go around, hopefully increasing our listenership beyond what Religion > Other might have allowed which, we hope, will mean more listeners, more patrons, and thereby, more donations to worthwhile causes like WyoAIDS. Who knows, maybe we’ll even try to do a live show or two. Obviously, we’ve got big plans — plans far too big to fit into the mold of our current show

In addition to all the aforementioned reasoning, almost everyone on the show has had some pretty major life changes in the last year that make producing a truly rated R show less and less appealing. It’s not that we can’t, obviously, but we’re all raged out and would rather make something that better aligns with our lives as they currently are and are growing to be.

So with that, I hope you all feel some better and that we see on our new show. You’ll still get favorites like Shea’s lessons and Jenn’s real lessons, and Big Gay Jim’s Good Gay News, but now you’ll also get more thinkers from Steve and more sensical nonsense from me.