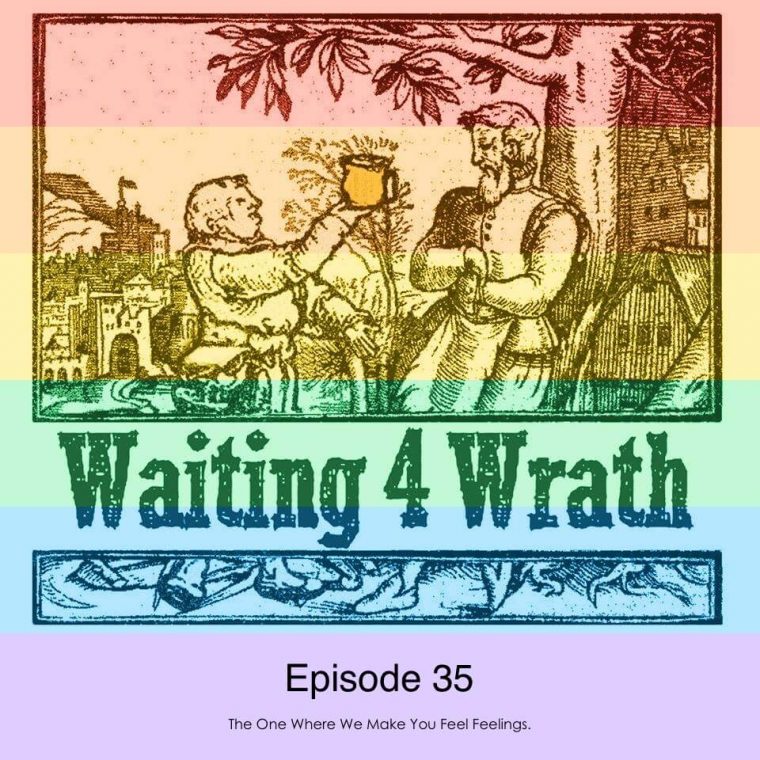 Episode 34 – The One Where Jenn Is Done With Our Shit.

where we ridicule the stupid in our world, so it doesn’t drive us insane.

Now, grab a beer and help us test the god hypothesis — because, while Freyja hasn’t struck us down yet, we are trying her patience!

Today we’re joined by good friend of the show, Vice 1331, who is sitting in for Jenn who cannot be here for the first half of the show. Even though Vice is one of our good friends, we’re not sure we can completely forgive him for all of the shitty beers he brought us to try out.

We have a guest-heavy show this week since we’re joined in the second half of the show by not only our regular beautiful host Jenn, but also the somewhat less than a beautiful friend of the show, Matthew the Apostle, who brought a bonus beer to taste, and who take part in a special quiz.

If We Take Down The Confederate Flag, We Must Also Ban the “Gay Reich” Rainbow One, Says Bryan Fischer http://bit.ly/1djwhfG

As of taping, we have officially 25 declared Republican candidates.

Starting off gently, sliding into the crazy:

This candidate was hired as CEO of Hewlett-Packard in 1999. By 2005, HP had lost over 50% of it’s share value, leading this candidate to be frequently ranked as one of the worst tech CEOs in history.

Quote: “I come from a world outside of politics where track records and accomplishments count.”

*hint: only Repub candidate with a known vagina. As of now, each party only has one vagina to speak of.

This toothy Southern bachelor seems to have less an open door and more a swinging door policy, at least as far as the ladies if he makes it to the White House:

Quote: “Well, I’ve got a sister. She could play that role if necessary. I’ve got a lot of friends. We’ll have a rotating First Lady.”

*hint: Perhaps it’s his delicate first name that has created some of the difficulties in pinning down a potential FLOTUS.

Despite parents literally allowing his hands on their children’s minds, this candidate believes that same-sex rape or intercourse in prisons prove that homosexuality is a choice:

Quote: “A lot of people who go into prison straight, and when they come out they’re gay.”

*hint: Member of a minority, still thinks being gay is a gateway drug to bestiality.

This candidate adds some much-needed gravitas to the 2016 race. He is nothing if not deserving of respect.

Quote: “I have a great relationship with the blacks.”

With his political career possibly riding on the coattails of his father’s name, this Southern candidate is now blazing his own trails and finding new and creative ways to be a sexist asshole on all the major news networks.

Quote: “I have heard of many tragic cases of walking, talking normal children who wound up with profound mental disorders after vaccines.”

*hint: He blamed being “testy” for snapping at Today host Savannah Guthrie and complaining she “talked over” him, and actually ‘shushed’ CNBC host Kelly Evans and told her to “calm down”.

Despite having been a senator of the great state of Texas for 12 years, somehow this candidate can never seem to find clothes that fit. He also keeps getting putting into positions to talk all science-y.

Quote: “One of the worst things that can happen to a species is to be listed on the Endangered Species Act. If is gets listed it’s almost certain to become endangered.”

—side note – do we actually add things to the Act itself? Isn’t it a list???

*hint: should technically be a non-issue, since he was born in Alberta, Canada (someone alert Trump!)

n 2001 this candidate introduced a provision to the No Child Left Behind initiative to allow schools to add intelligent design to their science curriculum in addition to evolution.

Quote: To Glenn Beck, “Drill everywhere, there’s no such thing as global warming.”

*hint: despite the name, he is not, in fact, built like a brick shithouse

Oldest of the current Repub candidates (not counting Jack Fellure**, who has been writing himself in since 1988) he also appears to be the least nutso: pro-choice, wishy-washy, but seems to be an advocate for gay rights, considers himself an environmentalist and has worked to fight climate change.

*hint: former Governor of New York who is not Rudy Guiliani

**Jack Fellure runs on a platform based on the 1611 Authorized King James Bible. As a candidate he calls for the elimination of the liquor industry, abortion and pornography, and advocates prayer in public schools and the criminalization of homosexuality. He has blamed the ills of society on “atheists, Marxists, liberals, queers, liars, draft dodgers, flag burners, dope addicts, sex perverts and anti-Christians”.

We have yet another Southerner, this time an ordained Southern Baptist minister who loves the limelight almost as he loves clemency pardons. I wonder if conservative voters know this former Governor commuted sentences and recommended pardons for twice as many inmates as his 3 predecessors combined.

Quote: “If the Democrats want to insult the women of America by making them believe that they are helpless without Uncle Sugar coming in and providing them a prescription for birth control because they cannot control their libido or their reproductive system without the help of the government, then so be it.”

*hint- not only has he stolen my birthday, this bulbous talking toad can’t stop mentioning how he wishes he was trans in high school

This candidate has actually 0 political experience, but has won the Presidential Medal of Freedom, so that’s pretty much the same, right?

Quote: “You know Obamacare is really, I think, the worst thing that has happened to this country since slavery.”

*hint: apparently he thought it was ok to say this since he’s black

Another former Governor, this candidate was approached in 2006 to be the next commissioner of the NFL. Just cuz, I guess.

Quote: “Immigrants are more fertile, and they love families and they have more intact families, and they bring a younger population.”

*hint: I assume he goes by the name he does because his older brother couldn’t pronounce his given name of ‘John’.

Youngest candidate and, in my humble opinion, the dumbest, this gentleman is ALSO a southerner and relies heavily on his Hispanic roots for appeal to his constituents.

Quote: “I’m not a scientist, man. (almost bonus points for an almost Ghostbuster quote) I can tell you what recorded history says, I can tell you what the bible says, but I think that’s a dispute among theologians and I think it has nothing to do with the gross domestic product or economic growth of the United States.”

*hint: loves to talk about his affinity for hip hop, but when asked to name a song or member of Wu Tang Clan, he buckled under the intense pressure.