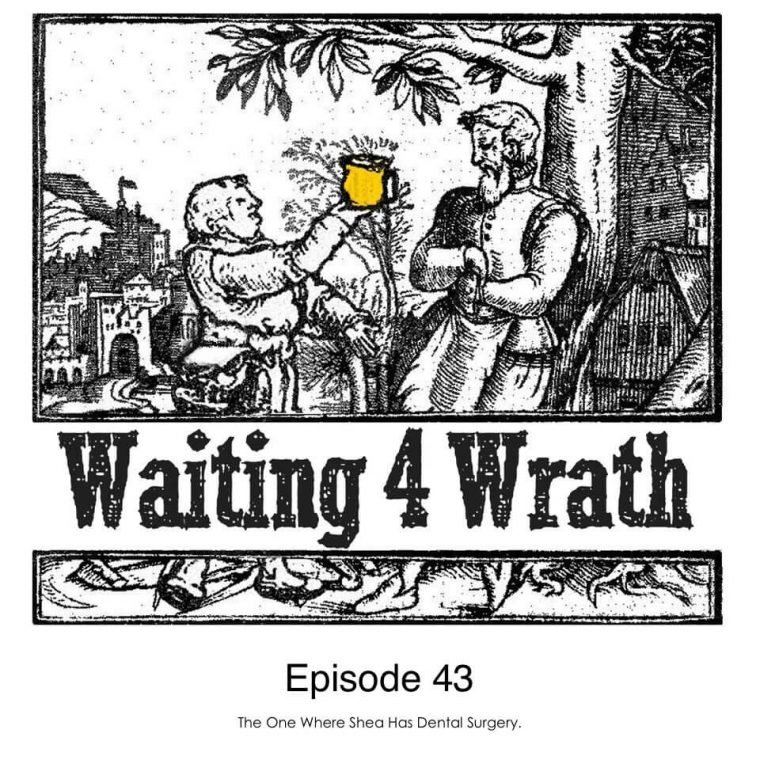 Episode 43 – The One Where Shea Has Dental Surgery

Grab a beer and help us test the god hypothesis — because, while Kapo hasn’t struck us down yet, we are trying her patience!

This week I learned that spilling a beer is the adult equivalent of letting a balloon go.

The Talmud is very strict about banning extramarital sex — but also enforcing marital sex. The Talmud even lays out a timetable for how often husbands should “rejoice” their wives.

On this weeks show, episode 43, Pat Robertson will make Siri think whoo whoo bullshit at Josh Duggar to stop him jacking it to Ellen Page.

Thanks to Utah Outcasts for reaching out to us, you guys rock. Check out Utah Outcasts on iTunes, Stitcher and wherever quality podcasts are casted.

Special thanks to the atheist podcasters that replied to our guesting request. If you’d like to have beautiful Jenn or drunk Shea on your show, drop us a line.

Ted Cruz takes some time out of his busy schedule to grill up some pork chops and ignore basic civil liberties for around 4% of Americans.

This past week harkened in the annual Iowa State Fair and Ted Cruz thought this would be the perfect place to spew his own special brand of bigotry and nonsense. In between trying really hard to be cool and kissing the public’s ass he was approached by Ellen Page in a shitty disguise asking questions about the LGBTQ community and their rights. Well, Cruz performs exactly how we expected him to, with more than a little argle-bargle and double talk. There is a lot to this short video but the audio is just awful and hard to hear so there will be a link in the show notes. After Ellen asks her first question, if Cruz thinks LGBTQ community is persecuted more than the Bible believing Christian community he cuts her off and says “I’m happy to answer your question but not to have a back-and-forth debate,” or in other words shut up Ted is talking. Ted Cruz’s answers are tone deaf, mean-spirited and downright shit. While his argle-bargle satisfies most of the GOP’s side of the argument, his comparison forcing a Rabbi to conduct a Christian wedding to a baker refusing to make a gay wedding cake, shows he doesn’t have the mental capacity to handle the presidency. They don’t compare at all, it’s like saying a Donkey is the same as ass fucking (which for Cruze are similar). One is a business that must abide by the constitution above any religious objections and the other is forced cross-denominational ceremony administration. So, Mr Cruz, if I start a “church” that thinks Black people are evil, does that then allow me to discriminate against blacks at my diner? No it does not. Why? Because constitutional rights and the law override religious rights.

Okay, rant over… I got a little passionate about how much I hate Cruz. I’m sure by now most of you have seen Ellen grill Cruz while he ais grilling. What i wanted to actually tell you is how he is trying to recover himself.

“I’m a Christian and scripture commands Christians to love everybody,” he continued. “This is about whether the government is going to persecute people of faith for standing up to their faith.” (Except if you’re gay though)

“And what we’re seeing right now is this liberal fascism and intolerance,” Cruz said. “Their object is to persecute, to punish, to fine any Bible-following Christian or believer that believes in the biblical definition of marriage as the union of one man and one woman.”

“There are some activists who, frankly, manifest a hatred and intolerance for Christians, who are persecuting Christians,” the GOP candidate said as he squinted. “That is unfortunate. As I said, I think we should love everybody.”

So he recovered by reminding us that the christians are being more and more persecuted every year and it’s just so tough on them… They just want to love. You know it’s all too often that HUGE groups, like the 77% of americans that identify as christian, get bullied into baking cakes and selling flowers for the fierce oppressive 3.4% of the US population that identifies as LGBTQ!

If this trend continues we should be on the look out for poor Christian youth that have been forced into a life of homelessness and prostitution simply for having coming out as Christian to their gay parents resulting in their immediate disownment. .

Everyone pray for those poor Christians

In closing I want to remind you that Cruz’s slogan is Reigniting the Promise of America… Ignite meant to set on fire, so i think this means let’s make America gay and he just isn’t ready to step out of that closet yet.