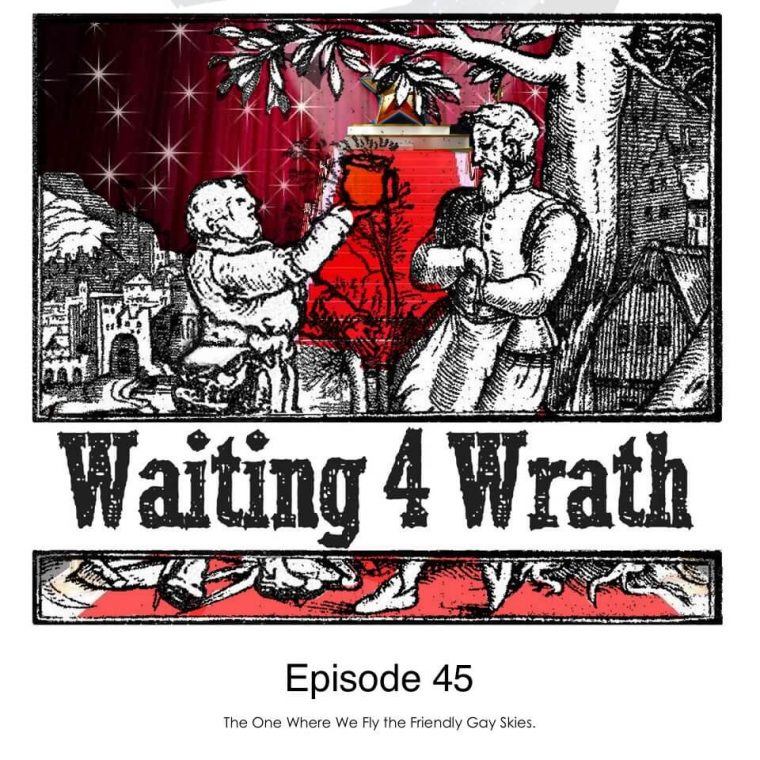 Episode 45 – The One Where We Fly the Friendly Gay Skies

Grab a beer and help us test the god hypothesis — because, while Biersal hasn’t struck us down yet, we are trying his patience!

I’m Big Gay Jim, your flight attendant and entertainment director for today’s flight. Please keep your drinks inside your hands or mouth at all times and remember that in accordance with federal regulations, you must obey all instructions from the flight crew. Namely me.

This past week was Rosh Hashanah, the first of the Jewish High Holy Days. It’s known as the Feast of Trumpets and is said to be the anniversary of the creation of Adam & Eve and their first actions toward the realization of humanity’s role in god’s world.

Congratulations to the Universal Church of … Bacon for tripling its membership. Find out more at unitedchurchofbacon.org

As you may have guessed Shea’s still on his honeymoon, but no word yet if his honey is enjoying the mooning. So welcome Big Gay Jim to the show!

Today in ‘The South continues to outdo its own idiocy’ news, an Alabama town is trying to pass a law regulating pants and skirts worn by all citizens and visitors to the city.

Kim Davis will not interfere with gay marriage licenses

Afterlife Styles of the Rich & Famous!

Some existential quotes from celebrities. Do you think they are atheists or religious? Some starts, there no doubt: the George Carlins, Bill Mahers, Ricky Gervais’, … Kirk Cameron’s? But what about the less outspoken?

Elbow Skin for a clip of The Beer Song. Find the full version and more musically comedic gold at http://elbowskin.com.au
And of course, to our patrons and listeners like you!