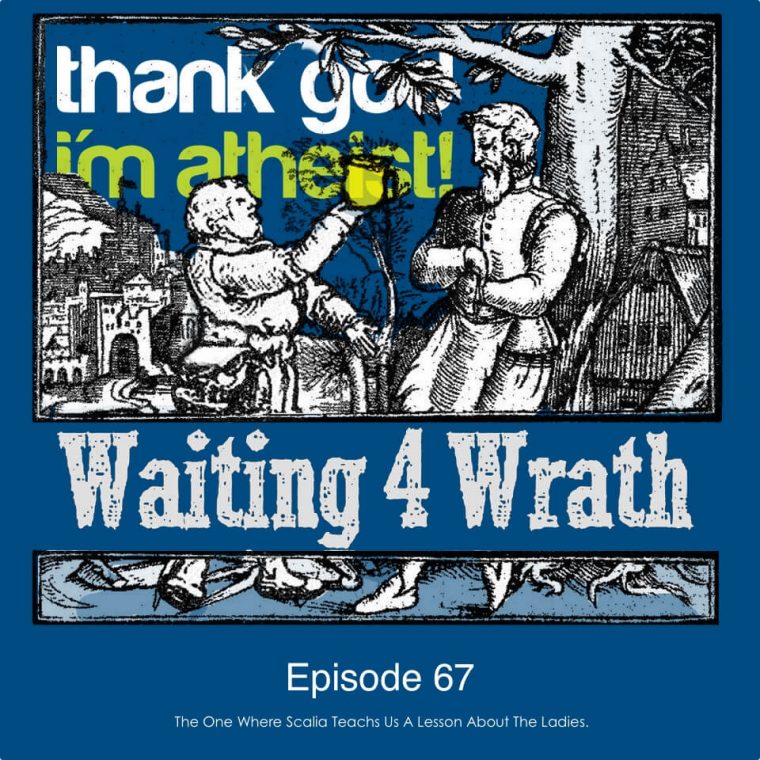 In This Week’s Show, episode 67, Dan from TGIA explains why Justice Scalia’s purity is like a ripe apple … grown from toxic mormon tampons.

Now, grab a beer and help us test the god hypothesis — because, while Elohim (Mormon’s God the father) hasn’t struck us down yet, we are trying his patience!

This week I got in touch with my inner-self… This is the last time I buy one-ply from the dollar store.

Since I was out for the Valentine’s show, here’s a fun sex fact: Did you know followers of the Western occultism use sex magic? It’s the use of the power from sexual arousal and orgasm to achieve a desired result.

Church Leader Anoints Congregation with the Hammer of Thor – http://bit.ly/1Qic5aw

Scalia, Phelps, or Limbaugh – A quiz about the late Scaily. Because fuck being polite, there are some people we’re just better off without.

“Filthy sodomites crave legitimacy as dogs eating their own vomit & sows wallowing in their own feces crave unconditional love.”

-Scalia said in December while at Princeton University

“It’s NOT OK to be gay. It will damn the soul, destroy the life, and doom any nation that tolerates such evil.”

“When a gay person turns his back on you, it is anything but an insult; it’s an invitation.”

“Homosexual sodomy? Come on. For 200 years, it was criminal in every state”

-Scalia said in October at the American Enterprise Institute, according to The Associated Press

2. Non-Whites and other minorities

“There are those who contend that it does not benefit African Americans to get them into the University of Texas, where they do not do well, as opposed to having them go to a less-advanced school, a slower-track school where they do well. One of the briefs pointed out that most of the black scientists in this country don’t come from schools like the University of Texas. They come from lesser schools where they do not feel that they’re being pushed ahead in classes that are too fast for them.”

“Have you ever noticed how all composite pictures of wanted criminals resemble Jesse Jackson?”

“Forget the American Bald Eagle. Since June 23, 1994, the only fitting emblem for the Great Seal of the United States Judiciary is this beast…Just call me: ‘Yo Honuh’!!!… Here Come De Judge!!!”

-Phelps –Text surrounding a racist caricature of an African-American female judge, “The Federal Judiciary: A Menagerie of Demonic, Libidinous, unclean Beasts: A Curse from God Upon an Apostate Nation,” WBC flier, November 28, 1996

[When a Mexican won the New York Marathon] “An immigration agent chased him the last 10 miles.”

“No one thinks your client is abstaining from tequila for fear of being deported. This is an ingenious exercise of the conceivable.”

-Scalia responded to an attorney argued that his client didn’t have to be deported because he was already on parole.

“If homosexuality being inborn is what makes it acceptable, why does racism being inborn not make racism acceptable? … We are born that way. We don’t choose it. So shouldn’t it be acceptable, excuse — this is according to the way the left thinks about things.”

Women: can’t live with em, {redacted because it’s a give away} because they’re hysterical, shrieking, fetus-viability redefining banshees.

“A feminazi is a woman to whom the most important thing in life is seeing to it that as many abortions as possible are performed. Their unspoken reasoning is quite simple. Abortion is the single greatest avenue for militant women to exercise their quest for power and advance their belief that men aren’t necessary. Nothing matter but me, says the feminazi; there is an unviable tissue mass. Feminazis have adopted abortion as a kind of sacrament for their religion/politics of alienation and bitterness.”

Scalia When a law student at the University of Wyoming asked what classes she should take.

“I’m a huge supporter of women. What I’m not is a supporter of liberalism. Feminism is what I oppose. Feminism has led women astray. I love the women’s movement — especially when walking behind it.”

Limbaugh, responding to criticism that he is sexist and defending his selection as one of the judges at the 2010 Miss America Pageant, “Fox News’ Fox & Friends,” February 3, 2010.

“Feminism was established so as to allow unattractive women access to the mainstream of society.”

“The president whose moral values would permit him to kill his unborn grandchildren if his daughters get pregnant by mistake, that same president has now issued a formal proclamation glorifying sodomite sin!”

“Obama is a clown. You don’t have to be a scientist to know that the President doesn’t know what he’s talking about when he says fossil fuels are the energy of the past. We have more oil than we need. We’ll never run out of it. It’s all we’ve got.”

-Limbaugh, saying the world has unlimited oil despite what geologists and other scientists say, March 8, 2011.