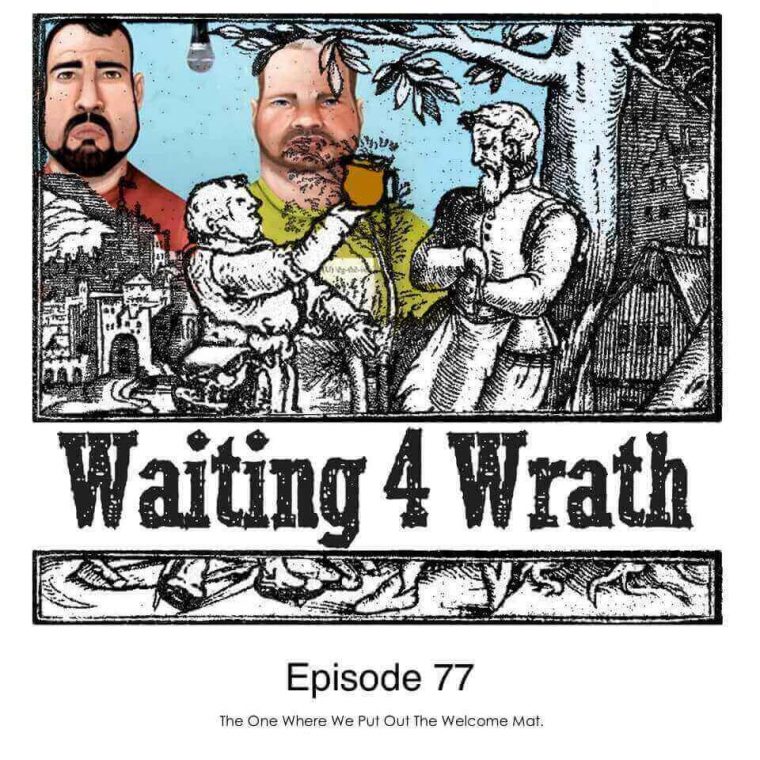 Episode 77 – The One Where We Put Out The Welcome Mat

Now, grab a beer and help us test the god hypothesis — because, while Kche Mnedo The Great Spirit of the Potawatomi, Natives of Chicago hasn’t struck us down yet, we are trying his patience!

This week I learned that dolls set an unrealistic image of women. For example, I found out Russian women do not contain many slightly smaller Russian women inside them.

Did you know Prince was raised a 7th Day Adventist, but converted and became a devout Jehovah’s Witness? In fact, he would sometimes go to fans’ doors to proselytise…so that’s annoying.

In this week’s show, episode 77, Tom and Cecil Goose a fundamentalist Puertorican Mormon with a poisonous baby snake.

I’m Steve, but before we get to all that, let’s have a beer!

Thanks to new patrons, Dana & Jeff, friends of the show and all around awesome people. Thank you so much.

We’re very close to our first goal of making Waiting4Wrath self-sustaining. Thanks for showing your love of the show and keeping Shea’s purity intact. To push us into the black visit http://patreon.com/w4w!

iTunes is fucked up. We had a listener send us a screenshot of the review he left the first of April that still isn’t on the site, so if you’ve recently left a review, please check back to see that it has posted.

We have a voice mail to share this week from Patron, The Napkin Pope, blessed be his wiping, regarding the virtues of penguin sex.

Email from Revan, a former JW:

Homosexuals- they are more accepting. Yes and no. Old guard over the age of 40 are not. They will still ridicule them and just be horrible to them, but LGBTQ can get baptized and become JWs, there is a gay man not far from where I live who was baptized last year. It is just that they can’t practice homosexuality.

Now JWs use the inter tubes but in the late ’90s it was strongly condemned because they could come into contact with apostates. They also strongly discouraged any college […]

this is a publishing company cult that in 1986 published “Evolution vs Creation”, a blue book that was filled with so many quote mines and misapplied quotes that they stopped publishing it by the 1990s.

JWs vehemently reject evolution but accept the big bang theory (god done it). As for blood transfusion, they reject whole blood and the four primary components, red cells, white cells, plasma, and platelets. They CAN accept fractions. In fact they can accept every fraction in blood which, if you would put it in a jar and shake it up you would have blood. The blood issue is only an issue because they want to keep JW’s separate from the rest of society to increase the persecution complex and to make them surrender their thinking abilities.

Re: JW’s from Aaron.

Later in the story I drunkenly call this a corrective email. It clearly isn’t. Revan is a badass and I was blitzed. Thanks again for writing.

Finally, before we get going we need to give an extra thanks to Tom and Cecil of Cognitive Dissonance for joining us today. On the off chance you’re not already listening them, you’ll find their show at http://dissonancepod.com

Special thanks to Promoting Secular Feminism for providing this weeks bonus beer!

And their sister show, Atheist Avengers

South Carolina woman rams car into Walmart because she thought the Rapture was coming – http://bit.ly/1SCyHVo

This Chiropractor Cracks a Baby’s Back in This Highly Disturbing Promotional Video – http://bit.ly/1SCyK3v

Seriously, this video is terrible in a very special way. If you have a weak stomach, you should skip this one.

On Saturday, April 16th, a 7.8 magnitude earthquake hit about 17 miles (27km) from Muisne, Ecuador at a relatively shallow depth of 11.9 miles (19.2km). Shallow earthquakes create more damage because of their proximity to the earth’s surface. On Sunday evening, the government reported that 246 people had died and 2,527 were injured. – http://bit.ly/1SCyMbn