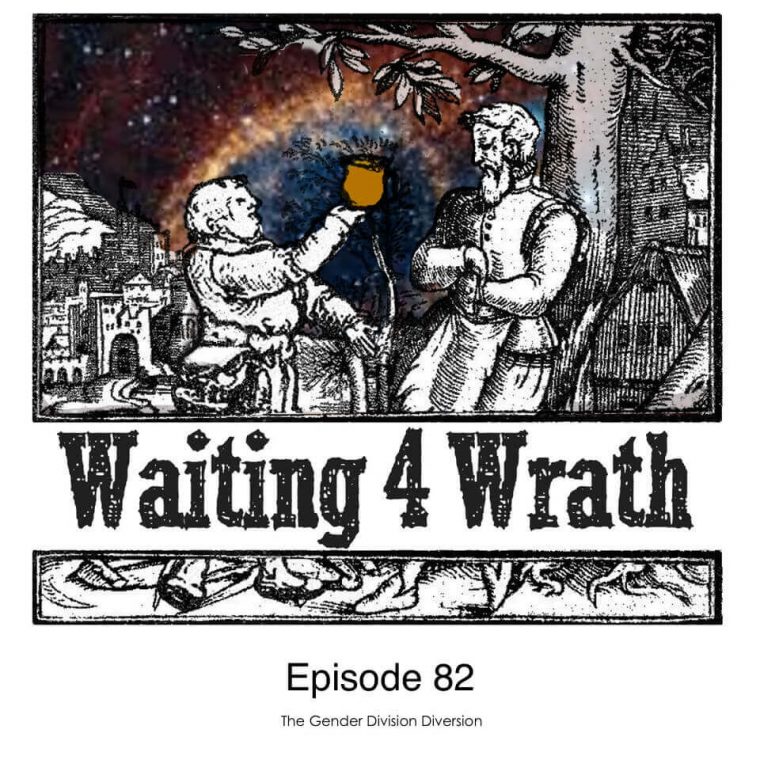 Now, grab a beer and help us test the god hypothesis — because, while Moshup, a Mohegan god who caught whales, hasn’t struck us down yet, we are trying his patience!

This week I learned that hippos are faster than humans on foot and in the water, so the only way to beat them in a triathlon is on the bicycle.

Did you know there are more than 10,000 distinct religious groups in the world? But of course only that guy’s god is real.

New patron Jason is such a badass that the Argonauts are planning an upgrade. If you want to kick that much ass visit http://patreon.com/w4w and support the quest!

If you want make happy faces, go leave a review

Don’t forget to tell us how glad you are that we’re all feeling better and totally promise not to make poo jokes next week at (513) 760–0463.

Thanks again to No Religion Required for having us on, we hope you all enjoyed a little bit of live wrath!

Followup: from Episode 71, Texas nutcase Mary Lou Bruner who was running for State Board of Education and who said that President Obama had worked as a gay prostitute, lost the primary though the crazy is still strong in Texas since she did win 40% of the votes. So, winning.

The history of the pee patrol – http://bit.ly/1WZnGUk

The first gender-segregated public restroom on record was a temporary setup at a Parisian ball in 1739. The ball’s organizers put a chamber box (essentially a chamber pot in a box with a seat) for men in one room and for women in another.

“Everyone at the ball thought this was sort of a novelty — something sort of eccentric and fun.”

Around 1887 we see the first law mandating gender-segregated toilets,in Massachusetts and many states quickly followed suit, and by the 1920’s such laws were the norm. Many of those laws have never been substantially modified, with obvious exceptions in progressive cities like D.C. and San Francisco, meaning that much of the United States’ toilet-related building codes reflect a literally Victorian prudishness that we might mock in other contexts.

The reason these laws exist in the first place.

Women’s growing presence in the factory workforce, and in public life more generally, triggered a paternalistic impulse to “protect” women from the full force of the world outside their homes, which manifested itself architecturally in a bizarro parallel world of spaces for women adjacent to but separate from men’s.

Ladies’ reading rooms at libraries, parlors at department stores, separate entrances at post offices and banks, and their own car on trains, intentionally placed at the very end so that male passengers could chivalrously bear the brunt in the event of a collision.

Other great laws from around 1887 that we totally should still have today The Daws Act of 1887. The Dawes Act of 1887 (also known as the General Allotment Act or the Dawes Severalty Act of 1887), adopted by Congress in 1887, authorized the President of the United States to survey American Indian tribal land and divide it into allotments for individual Indians.

Jim Crow laws were state and local laws enforcing racial segregation in the Southern United States. Enacted after the Reconstruction period in 1890, these laws continued in force until 1965.

The Fugitive Slave Act of 1850

The Fugitive Slave Law or Fugitive Slave Act was passed by the United States Congress on September 18, 1850, as part of the Compromise of 1850 between Southern slave-holding interests and Northern Free-Soilers.

This was one of the most controversial elements of the 1850 compromise and heightened Northern fears of a “slave power conspiracy”. It required that all escaped slaves were, upon capture, to be returned to their masters and that officials and citizens of free states had to cooperate in this law. Abolitionists nicknamed it the “Bloodhound Law” for the dogs that were used to track down runaway slaves.

The Supreme Court ruled the income tax unconstitutional. So, the progressives passed the Sixteenth Amendment legalizing the income tax. Originally, the act was aimed at the richest of the rich. Eventually, the tax trickled down to all Americans. Generally speaking, the higher the tax rate, the more it depresses the economy. To many Americans, the income tax represents the greatest threat to liberty and the economy today.

The Eighteenth Amendment necessitated the Volstead Act. This forced prohibition upon America. Many flouted the law and the government failed miserably in its attempts to enforce the act. Additionally, it created organized crime as bootleggers brought whiskey to the thirsty. In 1933, the government surrendered and passed the Twenty-First Amendment repealing prohibition.

This Victorian era, misogynistic bullshit law, still regulates most of our public toilets. This is a law that is hardly recognizable to a modern American. Also the practice of sex-segregated pooping and peeing as a matter of course is scarcely more than a century old, a tiny fraction of human history. Either way, we must ensure that our public toilets serve everyone before we can wash our hands of them—presumably under a faucet with a motion sensor.

As an aside; Jesus pooped next to women and he didn’t molest them…

Christian School That Won’t Admit You If You Have a Gay Sibling Responds After Public Outcry – http://bit.ly/1WZnTa4

Brewery solves the trans bathroom issue and its quite elequaint – http://bit.ly/25yPe4C