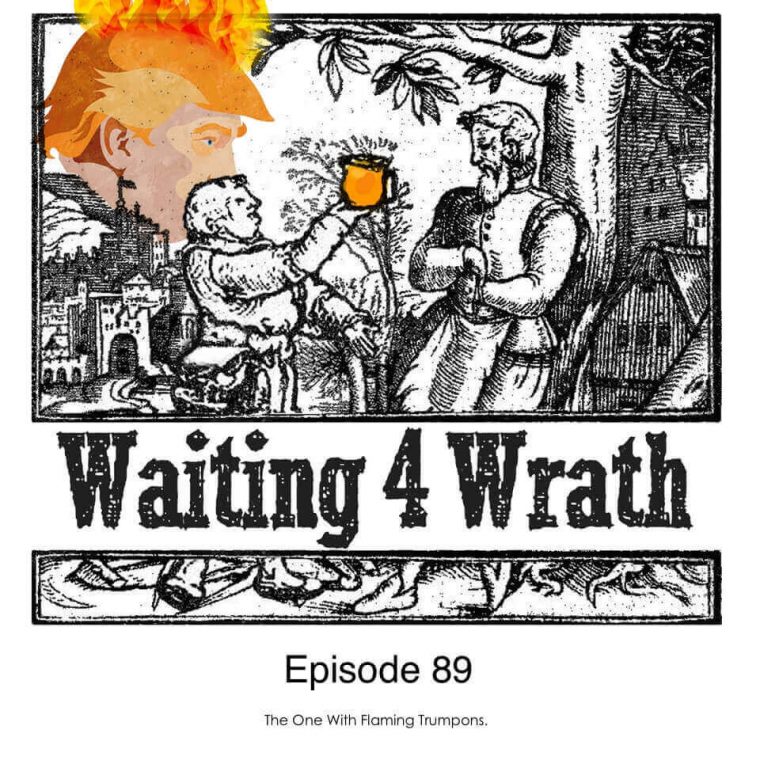 Episode 89 – The One With Flaming Trumpons

In This Week’s Show, episode 89, a trans Ghanian brewer catches a phrophetet-chu-zard…ra… with a Florida judge’s tampon-bait.

Now, grab a beer and help us test the god hypothesis — because, while Chaos (the first of the Greek gods) hasn’t struck us down yet, we are trying his patience!

This week I went into Victoria’s Secret a peasant and walked out a Knight! I shall henceforth be called Sir please leave you’re being creepy!

Did you know that according to the 2001 Christian Encylopedia there are at least 33,830 different Christian denominations?

We received our first text messages from a listener this week!

Thank you for the contact and we’re looking forward to a meeting you. Remember, listener communications that we mention on the show will receive a patreon cut of the episode wherein you’re mentioned, so use the drunk dial line to text or leave a message at (513) 760–0463 and get a free Patreon.com/w4w show!

I hope Peter can become more optimistic about Stephen, instead of being so … Jaded!

And a very special thanks to Mr. Bible Pants for his PayPal.me/4wrath donation! I hope those pants don’t itch too badly…

I have listened to these guys from the beginning. It gets better so much better as time goes by. I love the beer talk. It is to bad I can not export to you some of our local Powell River B.C. brew. We are a small town but we have a Belgium brew master who has moved to our little town and needless to say we are very fortunate. One of the best parts of your podcast it the uplifting Faith in Humanity segment. Keep up the entertainment. One cretic Shea lighten up on Steve!

Fellow podcaster Bobby Cary of No Religion Required has been recently diagnosed with cancer and could really use our help with defraying the crippling costs of dealing with this malady. Please consider visiting his go fund me page at: https://www.gofundme.com/thecaryfamily

A big thank you to Matt & Tim of Atheism 101, we really appreciate the promo they ran for us last week! Can’t wait to have a beer with you guys at ReasonCon!

Another Sanctimonious Dickhead Judge Who Refused To Do His Job – http://bit.ly/2ak6B6L

Trumps new running mate Mike Pence, now i remember talking about him and having a bad taste in my mouth afterwards but I couldn’t remember why… Now I remember, Indiana, a couple months ago Governor Mike Pence signed one of the strictest antiabortion laws to date. A law where a woman could be jailed for up to 20 years for having a miscarriage as well as if you experience difficulties in your pregnancy, you could also be risking prison, trauma or death. This obviously caused an uproar and started the Twitter movement PeriodsForPence

Well now that Trump has aligned himself with Pence the campaign has shifted to include the Cheeto-faced goon as well.

Be nice to people.

Trailer for Flesh Gordon that I mention in the show…