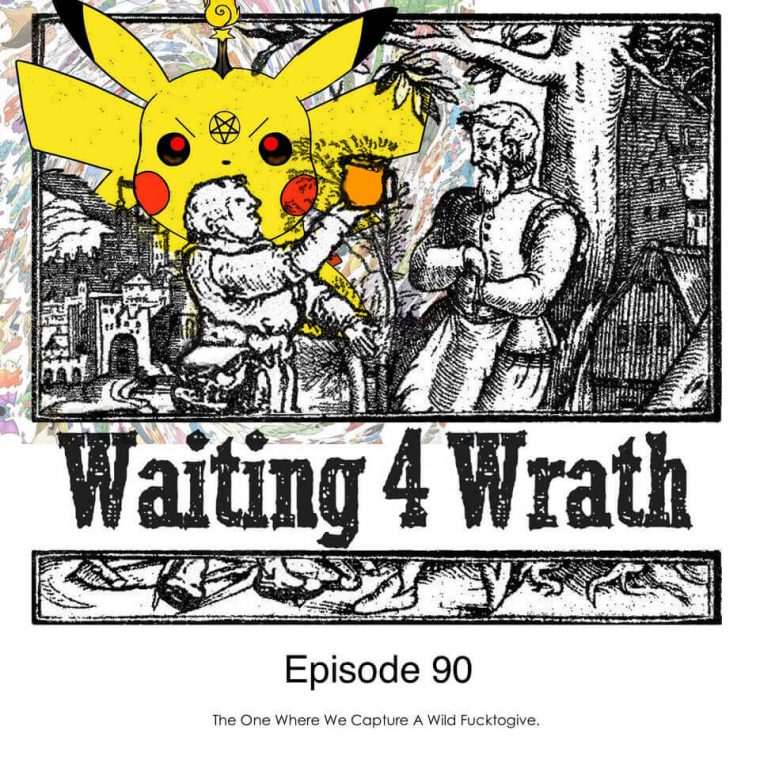 Episode 90 – The One Where We Capture A Wild Fucktogive

In this week’s show, episode 90, everyone sues the pokemon demons over satins shitty commandments…

Now, grab a beer and help us test the god hypothesis — because, while Bes: god of music, dance, and sexual pleasure; hasn’t struck us down yet, we are trying his patience!

This week I learned I can’t juggle, but it’s not that I don’t know how, its that I don’t have the balls to do it… Also I don’t trust stairs, they’re always up to something…

Didd you knowa statue of Jesus in India had water mysteriously dripping from its toes. Worshipers would collect and sometimes drink it. The source of the water was later found to be a clogged toilet near the statue

Donated By: The Yeti

New patron, Donavan. Thank you for giving us a bit of your hard earned money. We can’t adequately express how grateful we are for your generosity.

As an avid listener to Scathing Atheist and Cognitive Dissonance, I was so happy to find Waiting 4 Wrath. There is now a third insightful, skeptical thinking podcasting that makes me laugh my ass off.

Hilarious atheist/Septic podcast from some imaginary place called Wyoming. NSFW and with a healthy dose of blasphemy. And yeah, they have beer.

Thanks to all our listeners who leave a review on iTunes, remember to send us an email at [email protected] to let us know so we can send you a Patreon cut of the show!

And a real moment of silence for the victims of the shootings in Munich (where T-boogs lives).

We’re on Atheism 101 with Matt and Tim this week!

We’re gonna do a few headlines, give them a quiz, review a beer… you know, generally fuck up their show as much as they’ll let us…
Next week we’ll be having them on to talk about the actual information behind our quiz on their show.
So if you want some extra wrath this week, check out Atheism 101.
If you’re a fan of Atheism 101, first of all; welcome to our show! They’ll be on next week and setting us straight should be a real eye opener and, with a little luck, a laugh riot. Make sure you join us!

Rape Victim Who Was Locked Up For A Month Sues Prosecutor And Sheriff’s Dept – http://bit.ly/2awIXEC

So yeah… he’s a nob, but he’s right, the pokemons are all over religious places like Westborrow and the Basilica of Our Lady of San Jan del Valle:

Father Wants Pokemon Go Users To Stay Away From Basilica Of Our Lady Of San Juan del Valle – http://bit.ly/2a6QExK

Westboro Baptist Church In An Epic Battle For A Pokémon Go Gym – http://bit.ly/2a6QCpE

Unfortunately for Ricky boy, looks like Islam won’t be handling his pokeballs any time soon…

But how do the poke-hell-spawn make it into Churches and shit?

“We assign values based on whether there is a water body in an area — so a stream, a river, a pond — whether areas are designated as zoos or parks, or other kinds of mapping designations,” Hanke explained in regards to the placement of certain Pokémon. “…We utilise that [a geographic classification map] to map Pokémon species to appropriate habitats.” – http://bit.ly/2a6OYVh

So it’s completely random and Rick Whiles is a tool. Who knew. That said, there are a few places you might not want to spend your day poke-hunting:

Ghana’s First Microbrewery Is Changing the Way Beer Is Made in Africa – http://bit.ly/2a6VdIw

The Evolution Of Star Trek – http://bit.ly/2awJhmM