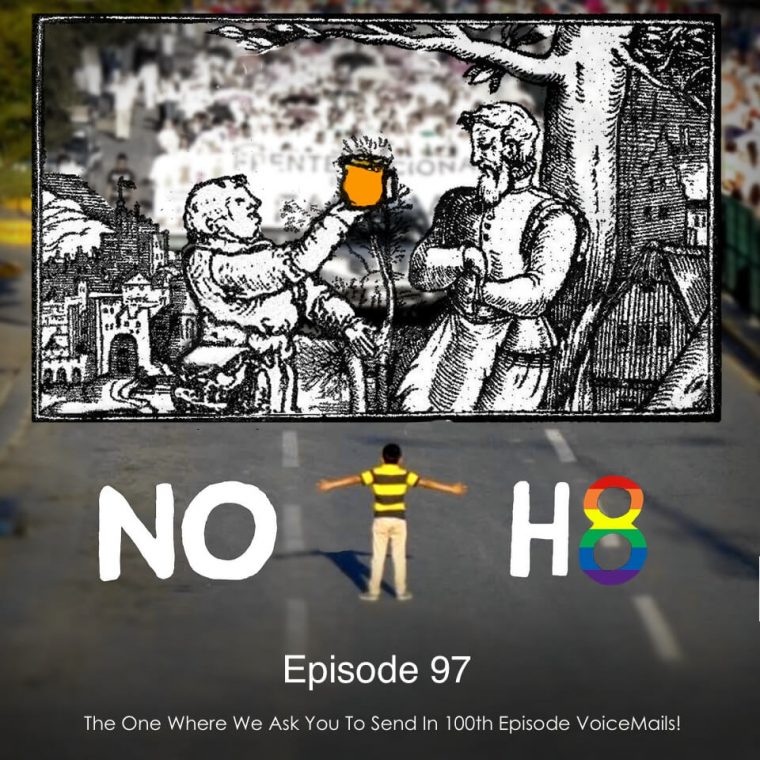 Episode 97 – The One Where We Ask You To Send In 100th Episode VoiceMails!

In This Week’s Show, episode 97 Italy’s most famous quiver-full burka designer ruins her lesbian marriage by using words and junk…

Now, grab a beer and help us test the god hypothesis — because, while Shitala Devi, goddess of smallpox and disease hasn’t struck us down yet, she is giving Hillary a helluva time and we are trying her patience!

This week I was diagnosed with a certain type of amnesia where I deny the existence of a certain 80’s band, there is no cure…

Did you know that almonds and pistachios are the only nuts mentioned in the Bible? The rest of the nuts just believe it’s true.

Jenn has great eyebrows too.

A newcomer to this podcast, I am in the process of listening to the back catalog of shows while savoring a Budweiser, since Meisterbrau isn’t available locally anymore. I love to hear witty, funny conversation, and this podcast never disappoints. BTW-Happy Birthday, Jenn!

Their taste is questionable, just like everything else about them

Of course I would stumble into this podcast during my 9 months of supportive sobriety. Their taste in beer is questionable, but that’s not unusual with this bunch of goons. W4W is a great podcast. If I ever were to create a podcast, it would probably be like this, but not good. Cheers, you weirdos.

We got some voicemails from Brewer and friend of the show Chad. Unfortunately, they’re a bit rough so we’ll just say, no worries man, you sounded great and w4w loves your input, now, go drink a glass of water cause… dayum!

(Patreon cut only due to time constraints.)

Christian Pastor: The Reason Most Marriages Go Bad Is That Women “Believe They Are Equal Partners” – http://bit.ly/2cbEzpH

“Husband does not mean the male partner in a marriage, husband means master.

“The reason for most problems in Christian marriages is the fact that women refuses God’s definition of marriage and form theirs. They believe they are equal partners.

“A wise woman will always be an influence to her husband, the foolish one will always annoy the husband, make him mad, make him angry and when you make him angry, you will be the victim. Learn to listen to your husband, practice it, tell yourself that you are going to do it because that is where your beauty is.

“Once you stop listening, your beauty evaporates. You wonder why you are dressing and he can’t see it, he doesn’t remember your last hair style. Beauty is in obedience. That’s where the Glory is.

This is a test run of a new segment. Aaron noticed that the crew was talking about stories

Black metal legend elected to Norwegian town council against his will

Pat Robertson: Non-Religious Children Should Be Beaten Until They Respect Christian Beliefs

Drop us a line!