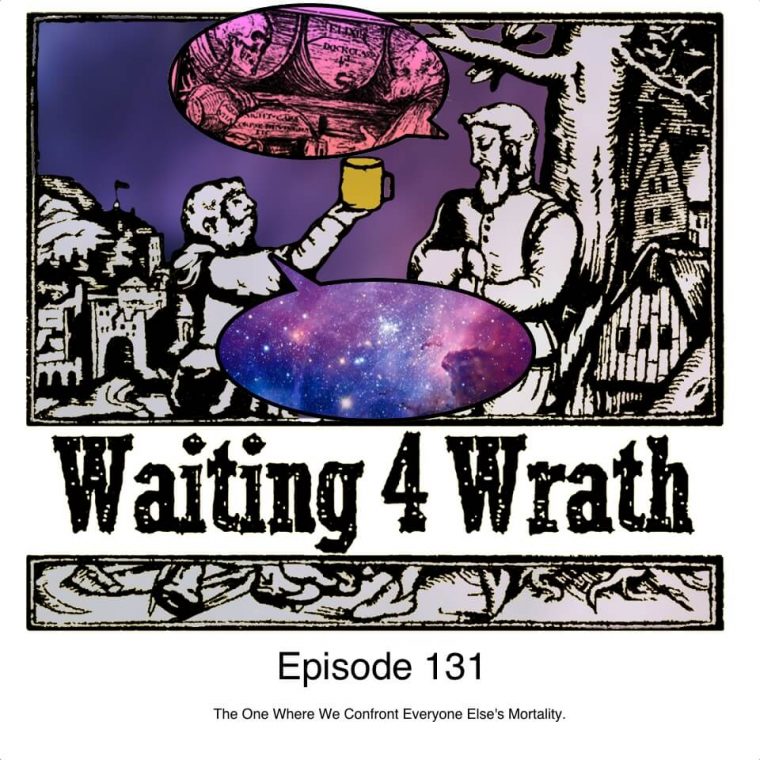 Episode 131 – The One Where We Confront Everyone Else’s Mortality

In this week’s show, episode 131, Stephen Fry travels to Denmark to piss on your dead dolphins.

Now, grab a beer and help us test the god hypothesis — because, while Azathoth (the ruler of Lovecraft’s Outer Gods) hasn’t struck us down yet, we are trying his/their/its? patience!

We raised over $22,000 at DQB this year, and I can almost walk and move without groaning and creaking. If only I didn’t have stubble on my (almost) everything.

Shea is unable to be with us today, as he’s in the upper Midwest right now to officiate a wedding

Did you know that, despite the cultural popularity, we’ve been mispronouncing Cthulu’s name (and the rest of the Outer & Old Gods) this entire time? In fact, it’s impossible for us to ever be able to say the names. Per Lovecraft, this is due to our not having a face of tentacles and dozens of tongues.

Side note: I bet Lady Cthulu is a happy monstrous, cosmic entity.

Don’t Be Mean To People – Ponysaurus

This week’s roundtable needs to start with an apology from yours truly.

In Jenn’s absence the mantle of knowing stuff fell-ish on me… and… well, I missed nearly everything. So, let’s start with some stuff I should have said week’s ago…

We weren’t sure if he meant ‘herd’ or ‘head’ that he was feeding (‘cause White Rabbit is a great song), so he was nice enough to clarify

“Hello, there wrathful studios. This is recovering catholic from the latest iTunes review. Just wanted to let y’all know that I did mean heard. Although it is small we have 3 horses and 3 goats on the property. After a long week, it is truly a pleasure listening while feeding them dinner Friday nights. Just wanted to clear up. Love the show and thanks for what y’all do.”

My little Limerick by Jaded Zappa of the Lefty Milk Stout

Jimmy was a Florida man, Who had a gator shaggin’ plan. He laid on his back, But Brutus thought him a snack, Now Jimmy is no longer a ladies man.

Butt-ugly bigot, Kim Davis, can now be sued for refusing to do her damn job. U.S. Court of Appeals for the Sixth Circuit sided with David Ermold and David Moore, saying they could sue her for depriving them of their “fundamental right to marry.” The appeals panel reversed a lower court’s ruling dismissing the case. – http://bit.ly/2poP4Sg

From episode 51 – Freaky talking-in-tongues weirdo, “prophetess” Opal Covey, who has repeatedly run for mayor of Toledo, Ohio, recently felt the wrath of god when her campaign van caught fire. Sadly, the fire did not destroy her crazy-person sign on the roof. –http://www.wtol.com/story/35337300/mayoral-candidates-van-catches-fire

We also want to thank Jim for joining us this week!

Shea is off marrying people — yeah, that’s right, you could get Yeti-wed! Not sure what Patreon level that is, but let us know what you think it’s worth

— and since he’s here I wonder if we can impose a bit?

So, Jim, put your wig on and let the folks at home know how Drag Queen Bingo went and how the listeners can continue to support WyoAIDS.org!

Happy birthday to you our friend. We can’t wait to have you back in the studio!

As usual, don’t forget to like our Facebook page , follow our Twitter feed , leave us a drunk dial message (513-760-0463), use our Amazon link to buy your normal stuff, and if you have the resources and innate awesomeness, become a patron at patreon.com/w4w.

Jim & Steve lead a discussion about losing loved ones and working through grief, the societal frustrations of a non-secular culture’s ownership of the funerary process, and how we can help and be helped.

If you are or have dealt with a loss and the world really just thinks you need more Jesus we’d love to hear your thoughts. More importantly, we hope we can bring a dick-joke fueled smile to dark times. If you want or need more help please check out the GriefBeyondBelief.org project. It looks like they haven’t updated in a while but the site still has a bunch of great resources and a closed Facebook group full of people who understand.

If you have any information, resources or input please don’t hesitate to write or call but do remember to let us know if you don’t want your communication to be read or played on air! Remember, we treat voicemails and emails more or less like opt-in show material but we’ll never release communications if you ask us not to!

Badass preacher backs up a secular invocation…ist? Invocator… Invocker?… [cough] a humanist to began a town hall meeting with a message that wasn’t about god… http://bit.ly/2pp1d9R